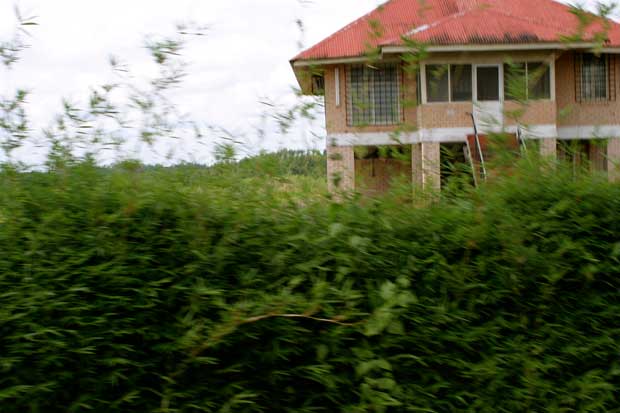 Editors’ Note: Laura McClure is traveling in Liberia this month on an IRP Gatekeeper Editors trip organized by the International Reporting Project (IRP).

We’re in a yellow school bus jouncing across Firestone’s rubber tree plantation when I notice that the air smells exactly like Sophie the Giraffe—or would, if Sophie were 50 feet tall and stalking through Liberia. Sophie, my kid’s “green” European teether, is made of rubberwood (havea), which in addition to being a kid-safe renewable resource, exudes an intoxicating warm honey smell. It’s the wet end of rainy season when our bus slashes through two leafy green walls of potential Sophies, the rubber trees rolling out to the horizon on both sides of the recently paved road. The green-hued air itself feels almost thick enough to chew. It is noticeably easier to breathe here than in Liberia’s capitol.

“Me? I’m Pentecostal,” says Comfort Willie, my hard-hat wearing Liberian seat mate. We are nattering on about the new houses Firestone built for its rubber workers, the crumbling brick buildings circa 1926, and the vast ecosystem of Christian churches in Liberia. Comfort, who in 2006 helped found the Firestone Agricultural Workers Union of Liberia with the online international help of United Steelworkers, is my new BFF. (When I disclosed earlier that I was in the Mother Jones union, she hugged me hard and said: “Eee! My union sister!,” then waved over her labor colleagues to meet another member of the flock.)

If you ever wondered whether international labor organizing could make a difference in the lives of workers, so far as I can tell here on the ground the answer is yes. After Firestone Liberia was sued over allegations of not enforcing its own ban on child labor—an affair Firestone management heatedly describes as “bullshit”— a 2007 UNMIL report noted continuing problems, though US courts have dismissed one charge. As Comfort tells it, soon after rubber tappers went on a 28-day strike and unionized, management increased workers’ take-home pay and began improving conditions for rubber workers on the plantation. I’d like to dig more deeply into these complex issues, so please, if you have tips for me, leave a comment. Here are some of the thorny unanswered questions I have: What exactly is the non-Liberian private security force’s role on Firestone Plantation? Has forced labor really ended, or did it just move off the plantation into contracter-owned farms? Is there forced labor trafficking from neighboring countries? Who uses the company hospital, and why was it so empty the day we were there? How much money will the company really make off the old rubberwood they’re cutting down now to make room for 5000 new seedlings a year? Just how Firestone-centric is the curriculum in the company-owned schools? Why do workers’ take-home salaries remain so low? Why, after 82 years, isn’t Firestone producing any rubber and rubberwood products in country? What are Firestone’s plans to increase its corporate sustainable responsibility efforts in the coming years? Is there any way to use the word “plantation” without sounding, at best, like an insensitive clod?

At least the last question is easy: If you’re a white American man with a thick Southern accent overseeing one in Africa, the answer is no. Especially when generations of workers living on your land have raised kids who also grow up to live and work on your land, receiving salary, housing, education, medical care, and a host of other goodies—all within the paternalistic embrace of one multinational company with strong ties to Nashville, TN.

I imagine that’s why Charles Stuart, the president of Firestone Liberia, uses the word ‘farm’ instead. He seems, perhaps rightly, proud of recent corporate efforts to rebuild the national rubber industry that rebel armies destroyed and improve homes, schools, roads, and health care for Firestone workers, though there’s plenty more to do. Like it or not, the Firestone plantation employs thousands of Liberians in a country where unemployment is currently upwards of 80 percent; these are coveted jobs. Indeed, with 5 Liberian doctors, 37 Liberian nurses, and 3 well-equipped ORs, Firestone’s newly rebuilt hospital may actually be the best medical care facility currently in the country. So if the guy running the place was Malaysian instead of American, would I, as a Southerner, find it less fundamentally disquieting?

Before lunch at the air-conditioned, golf-trophy dotted country club at the heart of the Firestone plantation, we pass by a primary school with a metal American swing set painted green, red, and yellow. I’m still a little stunned on the bus ride over from our last stop: a high school tour, where we happened to walk by an English class in session. The teacher was asking students to repeat after him. Here’s the classroom exchange we overheard:

Teacher: “Who made the decision to protect all the children?”

Teacher: “Firestone, that’s right! Firestone made the decision to protect all the children!”

You tell me: What the hell was that?