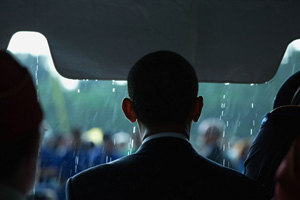 Now comes Act III for Obama, and the critical question: will he change the script?

The election results on Tuesday night were no surprise: a tea party-fueled tsunami of discontent washed away the House Democratic majority and eroded much of the Democrats’ territory in the Senate. It was a historic rout. The initial returns indicated the Republicans would pick up five dozen or so House seats and end up with a commanding majority in that chamber. Prominent House Democrats—Florida’s Alan Grayson, South Carolina’s John Spratt, Virginia’s Tom Perriello—lost. Tea party favorite Rand Paul dominated the early returns, winning the Kentucky Senate seat. Sen. Russ Feingold, a three-term, non-establishment Democratic progressive from Wisconsin—gone. Republican candidates with lobbying and corporate ties waltzed into office. A reelected Rep. Michele Bachmann (R-Minn.) will be commanding a sizable tea party caucus in the House. Republicans made signficant gains in gubernatorial races and state legislative contests, placing the party in a strong position to consolidate power by redrawing congressional districts in key states.

And all this was utterly predictable. With high unemployment persisting, polling had made it clear for months—perhaps over a year—that Obama and the Democrats had backed themselves onto the edge of a cliff. Yet the president and his strategists—David Axelrod, Rahm Emanuel, and others—failed to plot a path to safety. At times, it even appeared they were not exerting themselves fully—such as this past August when the White House did nothing special to prepare for the coming elections.

In his first eighteen months in office, Obama racked up impressive achievements: a stimulus bill that saved or created millions of jobs (though not enough), health care reform legislation that contained significant improvements (though it also included hard-to-understand provisions and eschewed a public option), and a Wall Street reform measure that set up a new consumer financial protection agency (though it did not tighten up the rules of the road sufficiently). But the president, who had presented such a compelling tale as a candidate, allowed Rep. John Boehner (R-Ohio) and Sen. Mitch McConnell (R-Ky.) to outfox and outmaneuver him. The GOP did all it could to block Obama’s agenda and then claimed he had not succeeded. Its leaders lied about the stimulus (claiming it had literally produced no new jobs), and they enabled and cheered on tea party critics of health care reform, who decried nonexistent “death panels” and who compared Democratic supporters of the bill to “Nazis.” And Obama never fully called them out.

If Obama—the guy with the bully pulpit— fails to define the opposition in clear terms, it will keep on defining him.

In the face of GOP demagoguery, subversion, and obstruction, Obama won legislative battles—his margins in Congress were large enough for that—but he never managed to win the story.

Republican narratives (“socialism,” “no new jobs,” “too much spending”) triumphed and fed the tea party fires, while Obama, staying true to his 2008 vow to transcend partisan wrangling, kept insisting that he could do business with the other side for the common good of the nation. He did occasionally poke the GOPers in the eye for it’s drumbeat of “no,” but he went back and forth, sometimes denouncing them, sometimes negotiating with them (often for naught). At best, he presented a mixed message. And the results are obvious. The Republican’s stark rallying cry (No to Obama) subsumed Obama’s balancing act (We Must Work Together and Have Patience, But The Other Side Sometimes Doesn’t Really Try).

Now Obama has a tough choice. Does he continue with this approach, even as the Republican caucuses in the House and Senate shift toward the right and greater extremism, or does he recalibrate and set a more confrontational tone? It’s true, as the conventional pundits say, that American voters don’t like confrontation in Washington. But if Obama—the guy with the bully pulpit—fails to define the opposition in clear terms, it will keep on defining him and his initiatives to their advantage.

This is not just about politics—and winning in 2012. It’s about policy. With the Republicans in charge of the House, Obama’s accomplishments are in jeopardy. The GOPers may not attempt to repeal the entire health care reform act—though Bachmann and Rep. Marsha Blackburn (R-Tenn.) vowed to do so on election night. But the Republicans can try to limit or restrict funding for the implementation of various provisions of that bill. Ditto for the enacted Wall Street reform legislation and parts of the stimulus package. To protect these and other policy victories, Obama is going to have to engage in divisive battle with the Republicans. (In the Senate, Rand Paul can use a variety of parliamentary rules to bring any and all action to a halt. And if he blocks raising the debt ceiling, he could singlehandedly precipitate a global economic crisis.)

Yet in the days before the elections, Obama was still sending I-can-work-with-them smoke signals. He told the New York Times he was optimistic he could find common cause with Republicans after the elections: “It may be that regardless of what happens after this election, they feel more responsible, either because they didn’t do as well as they anticipated, and so the strategy of just saying no to everything and sitting on the sidelines and throwing bombs didn’t work for them, or they did reasonably well, in which case the American people are going to be looking to them to offer serious proposals and work with me in a serious way.”

In other words, Obama didn’t recognize that the tea party-ized GOP, which has striven to block his key initiatives and catered to corporate interests, is not likely to change its inclinations after these elections. In fact, the tea party influence is likely to be stronger, and that means the Republican impulse to obstruct will be more intense. (After that interview became public, a prominent Democratic strategist angrily complained to me: he was signing Democratic fundraising emails that slammed the GOP as implacable opponents to Obama’s policies, yet the president was undercutting this message by describing the Rs as reasonable foes.)

Last week, when asked how the president will be able to work with empowered and more conservative congressional Republicans, White House press secretary Robert Gibbs didn’t have much to say: “We are going to be in a situation…that will require progress to be made only by working—where that’s possible—only through working together.” He didn’t acknowledge that Obama would be facing a brick wall of opposition. Moreover, this opposition will have two bedeviling (for the White House) components to it. The newly elected Republicans are more ideologically obdurate than the current band in Congress, and the House leaders are veterans who presumably learned from the excesses of the 1990s, when Newt Gingrich bumbled the job. An opposition with more ideological fervor and more savvy—that’s not a good recipe for the White House.

In Obama’s first act—as candidate—he effectively sold himself as a pol who could change Washington rancorous ways. In his second act—as president with whopping majorities in the House and Senate—he won the legislative battles with his nuanced tactics but lost the political war to a fierce and blunt opposition. His next act—as a president facing tremendous national problems but challenged by a hostile House—requires a significant rewrite. If he doesn’t get it right, there may not be an Act IV.