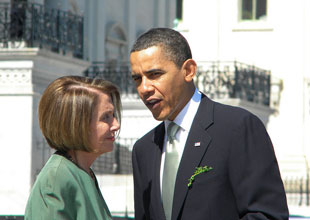 Speaker Nancy Pelosi announced via Twitter that she will be running for Democratic minority leader of the next Congress. The move stunned many in Washington who had expected her to step down from the party leadership after Tuesday’s massive Democratic wipeout in the House. Traditionally, congressional leaders have bowed out after losing the majority in either chamber of Congress, prompting widespread speculation that one of Pelosi’s more moderate colleagues would take her place. But Pelosi’s liberal supporters have lobbied for her to stay on, and her candidacy effectively quashes any real competition for the post. Current majority leader Steny Hoyer says he will not challenge her. And though Blue Dog Heath Shuler has launched a quixotic bid to challenge Pelosi, the junior member is not seen as a threat, particularly as progressives now dominate the Democratic caucus. So the path for her new leadership bid is clear.

But will the return of Pelosi help the Democrats? Detractors argue that the Speaker helped embolden the tea party right and accelerate the GOP’s return to power, concluding that she’ll continue to be a liability for a deflated Democratic Party. Pelosi is certainly one of the most despised politicians in America today, in terms of favorability ratings: as the face of Obama’s Democratic Congress, her image was plastered all over anti-Democratic ads throughout the midterms. She was arguably the single biggest reason that health care reform passed the House, bringing it back from the dead after other Democratic leaders had all but written off its passage following Scott Brown’s upset win in January. Pelosi also forced members to take votes on measures like cap-and-trade that had a dim chance of passing the Senate before the midterms. Since the GOP used the Democratic agenda to scare voters into supporting them, the argument goes, the party needs a fresh start.

But for essentially the same reasons, Pelosi’s return could help revitalize the Democrats by giving the party’s disillusioned liberal base a reason to get excited again. “Speaker Pelosi’s decision to run for leader is the first bold move we’ve seen from Democrats since the election,” Stephanie Taylor, co-founder of Progressive Change Campaign Committee, wrote in a statement. Liberal activists argue that Democrats did themselves no favors by running away from the major accomplishments that Pelosi and other party leaders had shepherded through Congress. Even Blue Dog members who voted against major Democratic legislation and tried to keep the axis of Pelosi-Reid-Obama lost their seats, leaving only a tiny handful of conservative Democrats left in the House. In the absence of a strong message that sold the Democrats’ accomplishments to the public, the Republicans succeeded in demonizing the opposition.

In the aftermath of this year’s rout, Democrats will need to redefine themselves if they want to revive the party. And with Pelosi poised to be at the helm, the House’s Democratic minority will assuredly try to push the party to embrace, not shun, its liberal identity.