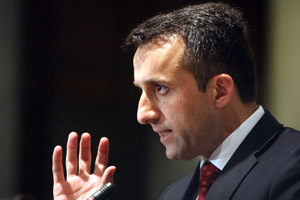 It’s no surprise that Amrullah Saleh, the former head of Afghanistan’s National Directorate of Security, was jettisoned by Hamid Karzai back in June (or resigned, depending on the telling), ostensibly for failing to thwart a bomb attack. As Saleh made clear during a speech at a Jamestown Foundation conference on Thursday, he believes Karzai’s signature strategy for ending the war, reconciliation with the Taliban, will lead to disaster. And he said the Afghan leader’s drive to pursue this strategy shows just how detached his administration is from the reality on the ground.

Western officials had long viewed Saleh, an ethnic Tajik, as one of the most intelligent, trustworthy, and effective members of the Karzai government. A veteran of the Northern Alliance, he fought alongside the legendary Ahmed Shah Massoud against the Taliban in the 90s, eventually becoming his intelligence chief, a role he reprised in the Karzai government.

In his speech, Saleh keyed in the pitfalls of negotiating with Taliban. “What has blurred the narrative of the war, is the talk of reconciliation,” Saleh told the Jamestown audience. “We could [have reconciled] with Al Qaeda and [the] Taliban on September 14, 15, [or] September 20, 2001. What was the need for these billions and billions of dollars to be spent [on the war]? It’s the same enemy.”

And in its desperation to achieve a breakthrough in the talks, the Karazi government overreached. That resulted in what Saleh referred to as the humiliating “bogus Mansour” episode, in which a grocer successfully duped government officials into believing that he was, Mullah Akhtar Muhammad Mansour, a high-ranking Taliban leader willing to come to the negotiating table. Saleh says his agency had vetted and rejected the man back in 2008 after he was unable to verify his identity, and that the Karzai government’s zeal to reach a historic deal with the Taliban akin to the Good Friday Agreement or Dayton Accords—demonstrates its unrealistic hopes for a breakthrough at this juncture.

Brokering a deal with the Taliban, in his view, serves as an excuse to draw down the United States’ troop presence in the country without assessing whether any of the on-the-ground facts have changed. “A deal may bring deceptive stability, but it won’t bring a long lasting stability where Afghans or foreigners will have confidence to invest, [to] convert Afghanistan into a viable economy,” he said.

He questioned those skeptical of the Taliban’s strength. “Will they be able to threaten our key and national interest by possessing AK-47s? Remember, when they helped Al Qaeda do 9/11, they had the same weapons.” His solution? “DDR” the Taliban. “Demobilize them, disarm them, take their headquarters out of the Pakistani Intelligence basements… Push the Taliban to play according to the script of democracy—and if they win…allow them a chance to govern.” He’s confident, though, that “they will die in democracy, they will die in a country where law is ruling, not guns, not IEDs, not the spread of fear and intimidation.”

Saleh also has a pretty good idea of where to change the narrative of the war: Pakistan. Since 9/11, he says, Pakistan has provided only “retail” and not “wholesale” cooperation. Time after time, the United States has been duped into trusting the country and its intelligence services. Saleh even claimed that Pakistani officials have privately admitted to him that their country has yet to change its ways despite their frequent promises to do so. “Now the United States believes that by giving more money and resources to Pakistan, you can convert their behavior from bad to good…but it is rewarding bad behavior which [continues] that bad behavior.”

Until then, government officials and security forces must be more independent, and demonstrate their accountability to Afghans, Saleh argued. Afghans and their government must be prepared for the day when an exhausted United States and NATO decide to leave their country.

“We hear the speeches of major western politicians saying, ‘failure is not an option.’ Now it seems as if failure is an option. And my key message, coming to Washington, is this: it is a winnable war. The nature of our enemy has not changed.”

He added: “People like me, who see the future of Afghanistan hanging on a cliff, we are preparing for plan B.”