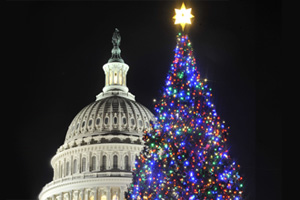 Ah, Christmas in Washington. ‘Tis the season for holiday cheer, good tidings—and political attacks wrapped up in cringeworthy yuletide metaphors. Cultural conservatives have long accused liberals of waging a “war on Christmas,” and both parties have been blamed for grinchy behavior this year. Below, ten ways the holiday has been used for political ends:

1) Though revived by the rise of Christian fundamentalists, the purported “war on Christmas” goes way back in American history. Industrialist Henry Ford, a notorious anti-Semite, blamed Jews for stifling Christmas carolers and school-based religious demonstrations, notes Time magazine. “The whole record of the Jewish opposition to Christmas…shows the venom and directness of [their] attack,” Ford writes in 1921.

2) A few decades later, Communists were blamed for destroying the holiday. Notes Time 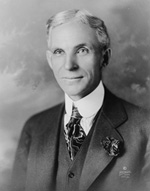 Henry Ford in 1919: Wikmediahere, quoting a pamphlet from the John Birch Society: “One of the techniques now being applied by the Reds to weaken the pillar of religion in our country is the drive to take Christ out of Christmas.” The title of the 1959 pamphlet: “There Goes Christmas?!”

3) The controversy over public nativity scenes came to a head in 1989, when the Supreme Court ruled in County of Allegheny vs. American Civil Liberties Union that it was illegal for governments to endorse Christianity—though governments could “celebrate the season” through joint displays of Christmas trees and menorahs. The compromise hardly settled the matter, however: Every year, local governments wrestle with disputes over whether Baby Jesus has been overshadowed by menorahs and the trappings of secular Christmas.

4) In 2005, Bill O’Reilly helped revived the “war on Christmas” meme, going after retailers like Toys ‘R Us who had failed to use the word “Christmas” in their advertising. “Surely they understand the anger that is going to be engendered among millions of Americans who feel their holiday is being denigrated and disrespected,” O’Reilly said. “I think it’s all part of the secular progressive agenda to get Christianity and spirituality out of the public square.” 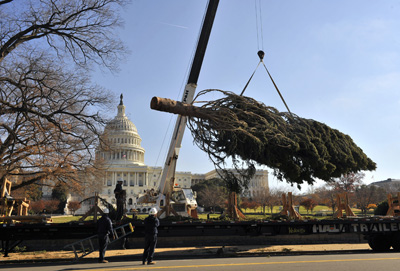 5) That year, Reverend Jerry Falwell also led a crusade against governments that labeled Christmas trees as “holiday trees.” “‘We want to make sure that Christmas is safe, but we know that it is not,” Mat Staver, president of the Liberty Counsel, a Falwell-backed conservative legal group, told the Baltimore Sun. ”When people seek to rename what otherwise is a secular symbol simply because of the name ‘Christmas,’ that shows the depths of political correctness run amok.” Then-House Speaker Dennis Hastert (R-Ill.) bent to the pressure by ordering that the Capitol Holiday Tree be rechristened the Capitol Christmas Tree.

6) President George W. Bush also experienced a fierce backlash from some conservative Christians for sending out holiday cards that wish 1.4 million friends and supporters a happy “holiday season”—a generic greeting that some activists interpreted as a war on the religious holiday. “This clearly demonstrates that the Bush administration has suffered a loss of will and that they have capitulated to the worst elements in our culture,” William Donohue, president of the Catholic League for Religious and Civil Rights, told the Washington Post. Bush “claims to be a born-again, evangelical Christian. But he sure doesn’t act like one,” added Joseph Farah, editor of the conservative website WorldNetDaily. “I threw out my White House card as soon as I got it.”

7) Liberals have tried to turn the tables in the Christmas wars, arguing that their conservative opponents are the ones who are truly obstructing the Christmas spirit through needlessly punitive public policies. In 2005, Rep. Steny Hoyer (D-Md.) used the holiday as a political bludgeon in a legislative fight over the mininum wage: “Democrats believe that Congress should act on the true meaning of Christmas—hope, generosity, and goodwill toward others,” said the Maryland Democrat. “Unfortunately, our Republican friends seem to have forgotten the meaning of Christmas.” 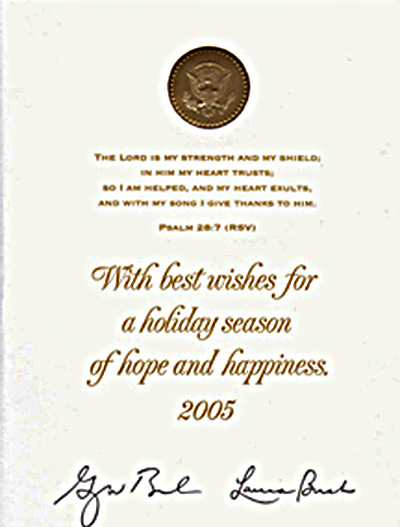 8) More recently, Republican lawmakers have invoked Christmas to slam Democrats for extending the current lame duck session. Attacking Senate Majority Leader Harry Reid’s ambitious plans for the lame duck, Senate Minority Whip Jon Kyl (R-Ariz.) declared: “It is impossible to do all of the things that the majority leader laid out without doing—frankly, without disrespecting the institution and without disrespecting one of the two holiest of holidays for Christians and the families of all of the Senate, not just the senators themselves but all of the staff.” Sen. Jim DeMint similarly blasted the Democratic effort to push through the START treaty and omnibus spending bill before Christmas as “sacrilegious.” DeMint registered his objections by threatening to read entire bills aloud on the floor—eating up what valuable floor time was left—and his threat successfully got the omnibus bill pulled off the floor.

9) Democrats hit back by accusing Republicans of taking Christmas away from the middle-class during the bruising tax-cut debate, as Politico notes. “Our Republican colleagues are playing Santa for the millionaires and Scrooge for the middle class,” said Sen. Robert Menendez (D-NJ). “For those who make over $1 million, they want to give them a big, fat check averaging $104,000 with a bow on it. For our children, they want to give them a big, fat $4 trillion bill to be paid back with interest for generations to come. I guess that’s their version of ‘Happy Holidays, America.'”

10) These days, Christmas may mostly be an excuse for Washington lawmakers to bring a stockingful of puns and groan-inducing metaphors into the public discourse. Introducing a debt-reducting bill last week, Rep. Jeff Flake (R-Ariz.) tweeted: “We ought to deck the halls of Congress with some fiscal restraint.”