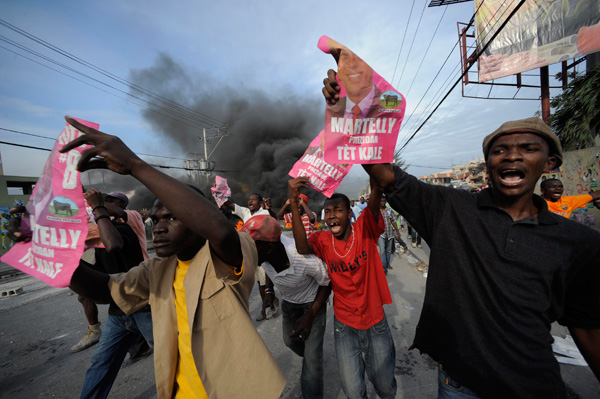 Lucas Oleniuk/Zumapress.comThe results of Haiti’s election are in: Former first lady Mirlande Manigat and Jude Celestin are the front-runners who will move on to the next round on January 19. President Rene Preval, who’s backing Celestin, is not particularly popular, but Michel “Sweet Micky” Martelly, one of the candidates who did not make it to the runoff, is. Now the populace is engaging in the important Haitian political tradition of setting shit on fire.

Preval took to the radio to tell people to stop trying to burn the country down, but observers say his speech is unlikely to calm the protesters. Nor is Sweet Micky, a superfamous singer whose performances mix camp with sociopolitics (and cousin of another wildly famous musician, Richard Morse, best known outside Haiti as Twitter user @RAMhaiti), backing down on his vow to challenge the results.

Haitians aren’t the only ones doubting the race’s legitimacy. Canada is threatening to not recognize the results. A leaked memo sent last year by a US ambassador to Haiti said Preval’s “overriding goal is to orchestrate the 2011 presidential transition in such a way as to ensure that whoever is elected will allow him to go home unimpeded. Based on our conversations, this is indeed a matter that looms large for Preval.” On Tuesday, the US Embassy said that it was skeptical Celestin could have advanced to the runoff. One freelance journalist in Port-au-Prince says an elections commission member straight-up told him that the government fixed the elections (h/t @lisahoashi):

“President Preval put pressure on us,” he explained, “we were forced to include Celestin in the second round.” I was shocked, this man was clearly scared for his life, yet he was divulging this huge bomb of information that the President of Haiti forced one candidate out of the run-off, and inserted his own hand-picked candidate into his place.

Whether or not the anonymous worker’s fraud claims are true, he is probably right about the end result: “We kicked Martelly out of the race, and now the people are going to destroy the city.”

You can keep tabs on them doing so on the Flickr stream of the always excellent user Gaetantguevara.

UPDATE: The president of the electoral council has announced a recount, which international observers and the top three candidates are invited to attend. Questions of ballot-stuffing and thrown-out votes have yet to be resolved.