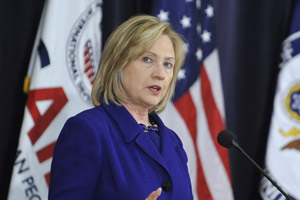 If Secretary of State Hillary Clinton and USAID Administrator Rajiv Shah have their way, the United States diplomatic corps might get a major boost in power and personnel. Realistically? They probably won’t.

On Wednesday, Clinton, Shah, and other top officials announced the release of the first-ever Quadrennial Diplomacy and Development Review (QDDR). Modeled after the Defense Department’s own quadrennial assessment, the QDDR represents the culmination of a two-year effort to consolidate and bolster “civilian power”—a concept Clinton defines as the “combined force” of government officials working on diplomacy, development, and crisis and conflict-related projects. “The QDDR is a blueprint for how we can make the State Department and USAID more nimble, more effective, and more accountable,” Clinton said. What will more civilian power look like in practice? Clinton and Shah hope to hire 5,500 new foreign and civil service personnel, and hand more autonomy to ambassadors and chiefs of mission.

To the lay-ear, that sounds great. Right? Not necessarily. The audience, made up mostly of NGO officials and development experts, expressed concern that the expansion would bring in a host of inexperienced newbies and undermine veteran foreign service officers. Clinton did her best to ease those concerns, but made it clear that her priority is finding the right people. “[O]ur first preference is, of course, to take advantage of Foreign Service experience. And we will look at ways of reaching out and attempting to do so. But we will not stop there if we cannot find the experience.…at the end of the day, I’m responsible for making decisions that are in the best interests of the United States of America, and that’s what I will do.”

There’s also the small matter of money for development projects, and the power to dole it out appropriately and expediently. During the Bush administration, the State Department lost considerable appropriation authority, thanks to what Clinton views as an emphasis on strong power in Afghanistan and Iraq. “[I]t just was easier, quicker for the military to do a lot of things,” she said. “And so you found the military doing development. You had young captains and colonels with discretionary funds…that they were literally able to call on $50- or $100,000 to repair a school outside of Mosul or help build a road in Afghanistan without any of the bureaucratic checks and balances that we go through at AID and State.” In a post-QDDR world, Clinton wants to restore the power of the purse to the relevant agencies.

But there’s a slight contradiction between Clinton’s vision of a leaner, meaner, diplomatic machine, and her goal of controlling more personnel and more money. And it’s a contradiction she’ll have to explain to the House Foreign Services Committee’s new chair, Representative Ileana Ros-Lehtinen (R-Fla.), whose hard line approach includes deep cuts to the State department’s budget and tougher sanctions.

Tea Party-fueled fiscal rectitude aside, Ros-Lehtinen could be simply trying to pick a fight with the White House. Back in September, the administration released the first-ever Presidential Policy Directive on Global Development, which lays out a vision similar to what Clinton and Shah advocate in the QDDR. If she gets her way, Ros-Lehtinen could hamper Obama and Clinton’s plans to elevate diplomacy and development, and make it tough for State to take more responsibility in Iraq, Afghanistan, and Pakistan.

The State Department and USAID hope that the QDDR leads to a tangible overhaul in US foreign policy. But this review is the result of a long, drawn-out two-year process. Deadlines were missed, and key personnel—including former Deputy Secretary of State and recently confirmed OMB director Jack Lew—jumped ship along the way. Meanwhile, former government officials and development economists have told Mother Jones to expect little in the way of tangible results from the QDDR. The problems with its roll-out, they say, suggest a certain amount of bureaucratic wrangling between State and USAID. And those problems only add weight to Ros-Lehtinen’s argument that the agents charged with the tools of diplomacy should be on a much tighter leash.