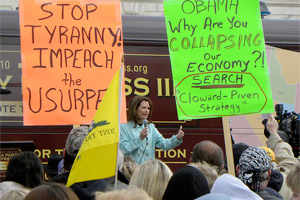 The tea party lost the food fight. Despite opposition from conservative activists, including the professional lobbyists at FreedomWorks, the Senate passed a landmark food safety bill 73 to 25 on Tuesday that would give the federal government broad new powers to police the food system. The vote, a rare display of bipartisanship, virtually assures that President Obama will be able to sign the bill before Americans carve up their Christmas goose.

Not too much should be read into any one political act, but the failure of the tea party to derail the legislation is significant—perhaps a sign that the movement has been given too much credit as a political powerbroker. Tea party activists have been vocal and have focused politicians’ attention on fiscal issues like the deficit. And to be sure, the tea partiers helped get out the vote for Republican candidates. But in many cases, they only succeeded in electing candidates who were also heavily backed by corporate interests. More than 60 percent of tea party candidates lost their races. Those who won were people like multimillionaire Ron Johnson, who defeated progressive Democrat Sen. Russ Feingold in Wisconsin. But Feingold was also heavily targeted by the US Chamber of Commerce and other corporate interests who hated his stands on everything from mandatory arbitration to campaign finance reform. Outside groups spent at least $5 million to help defeat Feingold, making it tough to attribute Johnson’s victory to tea party organizing.

If the food safety vote is any indication, a similar dynamic may be at work regarding the tea party’s legislative agenda. Food safety may simply be an issue that doesn’t get tea party activists frothing the way, say, health care reform or auditing the Fed do. But what’s more likely is that the tea party is no more effective in fighting corporate interests than MoveOn. And the vast majority of the food industry backed this bill. Poisoning customers, as it turns out, is very expensive and especially bad for business. Big Ag and the food processors decided that if they were going to do something about the problem, it would be a lot cheaper to let the taxpayers pay for food inspections rather than foot the tab themselves, and they got behind the bill. Not even Glenn Beck could rally enough tea party opposition to kill it. On the day of the vote, Beck urged his millions of viewers and listeners to oppose the measure. But it passed by a wide margin, with 15 GOP votes, including those of newly sworn-in Illinois Sen. Mark Kirk, who beat a tea party candidate in the GOP primary.

Just as tea party candidates don’t win elections without corporate backing, when the tea party is pressed into battle against big business, it usually loses. That’s what happened with the health care debate. Despite the massive protests—such as the angry showings at packed town hall meetings in the summer of 2009—all the tea party fist-waving failed to stop the bill’s passage. True, the Democrats had control of both the House and Senate, but that has never guaranteed progress on health care in the past. The difference this time around was that the Obama administration successfully bought off many of the special health care interests that might have otherwise fought the bill. The drug companies, the powerful American Medical Association, and much of the insurance industry were instead sitting at the table, rather than lobbying to kill the bill outright.

That’s not to dismiss the movement entirely, of course. The tea party has some influence, but only under the right and increasingly limited conditions, such as with vulnerable moderate Republicans. As my colleague Suzy Khimm elaborates on today in another post here, Sen. Olympia Snowe, the moderate Republican from Maine, switched her stance on earmarks this week, voting Tuesday in favor of an earmark moratorium amendment. (The amendment ultimately failed.) In March, Snowe voted against a moratorium. Khimm attributes the change to the tea party’s threat to challenge her in the GOP primary in 2012. And earlier this month, after Glenn Beck erroneously reported that Sen. Orrin Hatch (R-Utah) had voted to advance the food safety bill, tea partiers got fired up enough that Hatch posted a column on Beck’s website emphasizing that he did indeed oppose the bill. (Hatch’s colleague from Utah, Robert Bennett was unexpectedly ousted in the GOP primary this year with help from tea party activists, many of whom see Hatch as their next target.)

But in general, the tea party movement has only been truly successful when its interests align with corporate America’s. Whether their agenda is praiseworthy or not, the tea partiers have shown a commitment to working through the democratic process to achieve their goals, successfully mobilizing thousands of people who, up until then, hadn’t been very politically engaged. Yet when it comes to real, from-the-ground-up change, even the tea partiers can’t usually pull it off. Perhaps that’s a good thing: Letting a small group of angry people direct policy changes from one year to the next isn’t exactly a formula for a stable democracy. At the same time, however, it means that corporate money really does have a chokehold on the political system, and even the angriest and most organized of grassroots activists aren’t going to do much to change that.