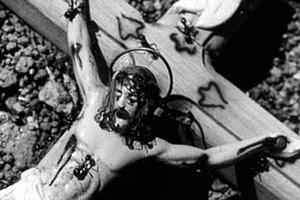 Last week, incoming House Speaker John Boehner and incoming House Majority Leader Eric Cantor were acting like they’d received a gift from above. On November 29, a Christian web news service published a critical story about “Hide/Seek: Difference and Desire in American Portraiture,” a new gay-and-lesbian themed exhibit at the National Portrait Gallery that included a seemingly sacrilegious video of an insect-infested crucifix. In response, the two top House Republicans demanded that the gallery, part of the federally funded Smithsonian Institution, cancel the entire show. Cantor dubbed the exhibit “an outrageous use of taxpayer money.”

Their conservative colleagues rushed to bring the wrath of Congress down on a staid institution best known for its First Lady portraits and Gilbert Stuart renderings of George Washington. Georgia Rep. Jack Kingston, a member of the House Appropriations Committee, told Fox News, “If they’ve got money to squander like this—of a crucifix being eaten by ants, of Ellen DeGeneres grabbing her breasts, men in chains, naked brothers kissing—then I think we should look at their budget.”

For congressional Republicans, the kerfuffle was a welcome chance to rile up their base. Evangelical Christians have been uneasy with the rise of the tea party movement and its attempt to focus on fiscal issues to the exclusion of more controversial social ones. The Portrait Gallery provided the GOP leadership with an easy way to reassure socially conservative foot soldiers that it has not forgotten them: Reviving the culture wars of the 1980s, when conservatives crusaded against objectionable federally funded art. Attacking “Hide/Seek” provided an effortless victory with little downside: The artsy types who cried censorship generally don’t like Republicans, and Bohner and company know that while the tea party is a vocal part of their coalition, evangelical Christians still make up a much bigger part of the electorate (and there are many tea partiers among them, too). And besides, there’s nothing better than a fight over publicly-sponsored gay art to get evangelicals fired up.

The gallery quickly responded to the outcry by yanking “Fire in My Belly,” a four-minute film some jokers have dubbed “Anty Christ.” The graphic video, made in 1987 by artist David Wojnarowicz, depicts the agonies of AIDS through various representations, including an 11-second shot of ants swarming a wooden crucifix. (See a version of the video below.) The montage also includes clips of a man having his lips sewn together (a reference to the old ACT-UP motto “Silence=Death”) and a shot of an erect penis.

Of course, it remains to be seen whether the religious right’s indignation can be sustained. It’s been more than two decades since congressional Republicans were outraged over giving federal funds to artists such as Robert Mapplethorpe and Andres Serrano, whose infamous “Piss Christ” depicted a crucifix submerged in a jar of his own urine. At this point, most Americans seem beyond shockable, having survived The Vagina Monologues and the onslaught of online porn. Like Wojnarowicz’s video, Cantor and Boehner’s outrage feels like part of another era, not one where the military is, one way or another, about to allow gays to serve openly and lesbian weddings are chronicled in the society pages of the New York Times.

Wojnarowicz, who died in 1992 at the age 37 from AIDS, might have been amused to see conservatives introducing a new generation to his work. During his lifetime, he did battle with the Christian Right over NEA funding and other controversies. In the late 1980s, the American Family Association used cropped images of his work in an anti-NEA pamphlet; Wojnarowicz successfully sued the group for misusing his work.

On Wednesday afternoon, the scrappy DC art gallery Transformer set up a loop of Wojnarowicz’s “Fire in My Belly” in its window on P Street, a bustling commercial strip just north of downtown. I walked past the storefront the following night on my way to the supermarket and watched the video with an eclectic group of passersby, who ranged from art aficionados to Whole Foods shoppers and customers of the low-rent Asian carry-out next door.

The cringes, though, were universal. “Fire in My Belly” makes “Piss Christ” look tame. Shown behind glass at night, the video looks like a horror film, what with the ants, the lips being sewn shut, mummified bodies, and other gruesome images. Outside of the context provided by a museum, the video is fairly inscrutable. Transformer’s front door is right next to the Dumpster for a fried-fish place, which meant the video was accompanied by the smell of rotting fish and the sight of scurrying rats. But seeing as Wojnarowicz made his name in the East Village in the late 1970s by painting on top of trash can lids and other public canvases, perhaps this was a better place to appreciate his art than the rarified halls of the National Portrait Gallery.