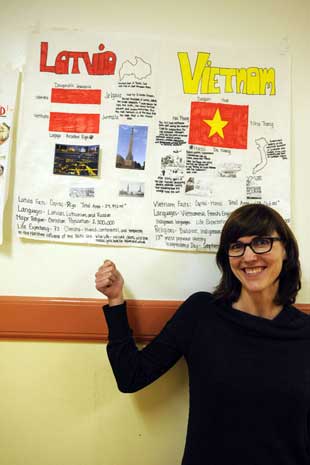 Editors’ Note: This education dispatch is part of a new ongoing series reported from Mission High School, where education writer Kristina Rizga is known to students as “Miss K.” Click here to see all of MoJo’s recent education coverage, or follow The Miss K Files on Twitter or with this RSS Feed.

I first heard the American term “achievement gap” after moving to San Francisco from Latvia in 1994 and watching my sister, Sabina Hentz, navigate the city’s baffling public school system on behalf of her 9-year-old son. “I have absolutely no clue how to figure out which schools are good and which ones are bad,” she ranted to me on the drive home from the airport. This was a novel problem to have, since in Latvia it didn’t really matter where you lived—all schools in Soviet-era Latvia received roughly the same funding and performed about the same. They even looked alike—most Latvian schools were built from the same Moscow-approved blueprint during the Soviet era, and I can still walk into almost any high school and tell you exactly where the cafeteria, bathrooms, and gym lockers will be. I have distinct memories of watching a female TV anchor broadcast math exam problems nationwide in 1987, while I and thousands of other kids in navy uniforms solved for the ‘X’ at the same time.

Fast-forward to 2005, when I started editing and reporting for an American political youth magazine called Wiretap. Like it or not, public education failure came up again and again in our coverage of all sorts of youth issues, including culture, race, class, and sex. I started to wonder: Here in the most powerful country in the world, in the same creative state that produced Silicon Valley, why do schools still seem worse than the puny Latvian equivalent I attended in 1987? How does what’s going on in urban classrooms, cafeterias, and principal’s offices align with what experts, philanthropists, and pundits recommend? And what do real teachers, students, and parents think about the seemingly endless parade of shiny new education trends? This year esteemed colleague Titania Kumeh and I decided to find out, and this series was born.

Over the next few months, Titania and I will be exploring American education trends through the hyperlocal lens of Mission High School, one of San Francisco’s lowest-performing—though rapidly improving—urban public high schools. Instead of writing another shocker on the achievement gap, we’ll ask students at Mission High and other inner-city schools what really works to help them to succeed. Instead of another diatribe on “value-added testing,” we’ll report from real classrooms on what star teachers do. And instead of obsessing about fights between school chiefs and teacher union reps like Michelle Rhee and Randi Weingarten, we’ll talk to teachers about their own employment contracts and tenure concerns. Don’t get me wrong—we’ll still cover the studies, talk to the experts, and report on conferences. But we’ll let the realities of every-day life in schools be the primary driver of our coverage, rather than reactions to the latest reports, donation announcements, or accusations. While the Mission neighborhood will serve as our base—we want to get to know one school and area really well—we’ll also visit charter schools, magnet schools, and more. Expect daily posts, tweets, or photos, as well as weekly interviews, articles, or videos. We believe that this kind of “boots-on-the-ground” reporting can often illuminate facts that get lost in a barrage of statistics and test scores, engaging more students and parents in the national debate.

So wish us luck, and follow us on Twitter for live coverage from the field! And please, leave comments or tweet and let us know what education issues you want us to look into more. We’d love to hear from you.