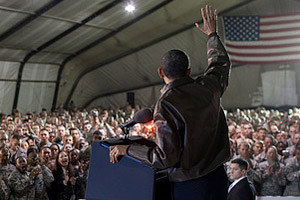 How can President Barack Obama whip up public support for a “minimalist” war? That’s the political challenge he faces as he proceeds with his current Afghanistan policy.

At a White House press event on Thursday morning, the president discussed his administration’s annual strategic review of the war in Afghanistan. No surprise: Obama claimed progress there and in Pakistan, while acknowledging that serious challenges remain. A declassified five-page White House assessment of the Af-Pak policy released this morning maintained that Obama’s troop surge in Afghanistan has “arrested” the “momentum achieved by the Taliban in recent years…in much of the country.” But it noted “these gains remain fragile and reversible.”

Obama repeated his administration’s mantra that the goal is to disrupt, dismantle, and defeat Al Qaeda. “This is not nation-building,” he insisted, noting that “we are moving toward a new phase,” in which US and NATO forces would decrease, as the Afghan government assumes more responsibility for security (and battling the Taliban). The goal, he said, is to hand the job over to the Afghans by 2014, after initiating some troop withdrawals (though how many is uncertain) this coming July.

Obama was walking the tightrope path he established a year ago: selling the war as critical for US national security, while assuring the public that the end game will begin soon. In other words, we need this war, but it won’t last much longer. Those two notions might actually be at war with each other. And there’s an accompanying challenge: defining success in Afghanistan. Victory won’t come with a Taliban or Al Qaeda white-flag surrender. In his press statement, Obama didn’t detail what a win in Afghanistan would look like. He left before taking questions, leaving Secretary of State Hillary Clinton, Secretary of Defense Bob Gates, and Marine Gen. James Cartwright, vice chairman of the Joint Chiefs of Staff, to field queries from reporters jammed into the briefing room.

The most significant moment in that subsequent Q&A came when a journalist essentially asked Gates: Can you really win this war? Gates replied that the “key is identifying our objectives carefully…to achieve our goals.” He went on: “Our goal isn’t to build a 21st century Afghanistan…[or] a country free of corruption, which would be unique in the entire region.” Gates noted that the aim is “to turn back the Taliban’s military and violent capabilities to the degree that the Afghan government forces can deal with them.” That’s certainly a standard—or benchmark, as the policy wonks call it—that will be difficult to measure. Moreover, Gates said that an accompanying goal is establishing a “minimum capability” of governance at the local level for security and dispute resolution. That would include, he added, a health clinic “within an hour’s walk.”

Reinforcing his point that the key to victory is modesty, Gates talked about the need to “focus on not getting too ambitious” and characterized the administration’s strategy as a “minimalist approach.”

That minimalist approach, though, is still costing the United States over $100 billion a year and entailing the deployment of well over 100,000 troops. And it may not be so minimalist. As Caroline Wadhams, directory for South Asia security studies at the Center for American Progress, says, “Gates’ remarks were just pretty telling about what the end state was. He said we have to have minimal objectives, but then outlined that we have to set up security, dispute resolution, and health clinics (within an hour of walking distance) at the district level. That’s almost 400 districts.” All this does sound close to nation-building.

Obama’s latest review doesn’t detail how all that can be done, especially when the government of President Hamid Karzai is so inept and corrupt. (The review also doesn’t say what ought to done about Karzai and the Kabul government.) “This review does not elucidate how progress is being made, does not clarify the end state, and while it acknowledges the challenge of sustainability and durability, it doesn’t describe how we get there,” Wadhams remarks.

Obama’s strategic review is not much more than a weigh station. The president says that his policy remains the same: It’s full speed ahead to some sort of disengagement kickoff in July 2011—depending on the conditions on the ground—and this will lead to a handoff of security responsibility to the Afghan government within three years. But it will be tough to judge or even determine those on-the-ground conditions. (When will you know that the Taliban can’t come back? Or the Afghan military can really fight effectively?) Just as it is hard to evaluate the threat posed by the Al Qaeda remnants that are still in Afghanistan and the border areas of Pakistan.

The internal contradictions within the policy remain—and so do the internal divisions within the government. Obama clearly wants to stick with the schedule, which will allow him in 2012 to declare “mission almost accomplished.” The military, which has been following a counterinsurgency strategy of winning territory and then hearts and minds, which could take years to succeed (if it can), may be less inclined to go along with significant troop withdrawals beginning this summer. There’s no telling yet if a White-House-versus-the-Pentagon battle is in the offing.

Yet with the war in Afghanistan, Obama is straddling more than one line. The war is important, but we’re getting out. Our goals our modest, but we need local governments throughout the country to be functioning (and able to counter the Taliban). We’re making progress, but, man, this is really tough. The president has yet to hit a true crunch point in this “minimalist” war. And his policy review process is not forcing him to do so—at least not in public.