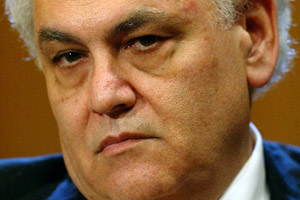 Richard Perle, the veteran neocon hawk who helped cheerlead the United States into the Iraq war, is back. As the fight intensifies over ratifying the START treaty limiting the nuclear stockpiles of the US and Russia, Perle has emerged as a prominent conservative voice urging Senate Republicans to say no to the treaty. Writing on the National Review‘s website this week, he and Kim Holmes of the Heritage Foundation slam the treaty “as a throwback to the Cold War paradigm, a bilateral treaty in a multilateral world.” Perle, an assistant secretary of defense in the Reagan administration and now a resident fellow at the American Enterprise Institute, insists that the treaty “threatens our freedom to deploy ballistic-missile defense,” and he contends “that the Russians need this treaty, while we do not.”

Perle has been trading on his past experience as a Reagan defense official to back up his gripes about the START treaty, noting in a recent Wall Street Journal column (co-written with Edwin Meese III, Reagan’s attorney general) that when he was with Reagan during a summit in Iceland with Soviet leader Mikhail Gorbachev, he watched Reagan ditch “an otherwise desirable treaty with the Soviet Union precisely because it would have impeded work on his Strategic Defense Initiative.” (Five former GOP secretaries of state—Henry Kissinger, George Shultz, James Baker, Lawrence Eagleburger, and Colin Powell—say the new START agreement does not block US missile defense.) And in an interview with a conservative website, Perle again played the Reagan card, maintaining that this START accord is “certainly not the kind of treaty Ronald Reagan fought for and accomplished.”

What Reagan might say about this START pact is a speculative matter. More to the point, there’s Perle’s past record. How on-the-money was he when he last figured into a high-profile national security debate—that is, when he was advocating war in Iraq before the 2003 invasion? Did that performance enhance his credibility? Here’s a look at the record:

There was no alliance between Iraq and Al Qaeda. Saddam was not, as Perle insisted, “on the threshold of acquiring nuclear weapons.” The war in Iraq was not completed in a short time, and military action required more than 40,000 troops. Iraq’s recovery was not self-financing. That is, Perle was wrong about almost everything.

In January 2009, Perle wrote a 4,600-word article for The National Interest defending his stance on Iraq. He took issue with the charge that he had been an “architect” of the war, writing, “had I been the architect of that war, our policy would have been very different.” Indeed, there would have been fewer troops dispatched, and these forces would have been deployed on the basis of mistaken assumptions about Saddam’s military and support. And Washington would have relied even more on the Iraqi National Congress led by the shifty Ahmad Chalabi, whom Perle fancied.

Perle blew the call on Iraq and joined fearmongering neocons in hyping the case for the war. Given this record, his warnings about START deserve more than a pinch of salt.