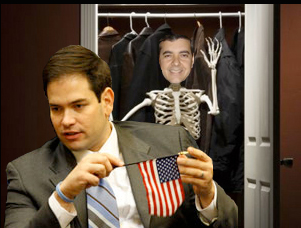 Rep.-Elect David Rivera (R-Fla.), a longtime pal of new Florida Senator and GOP wunderkind Marco Rubio, is the subject of an investigation involving a Miami dog track that made $510,000 in under-the-table payments to a consulting firm run by Rivera’s mom…just weeks after then-state Rep. Rivera handed the dog track a major win in the statehouse.

The state attorney’s office in Miami is pretty sure the deal was dirty, since no one’s alibis line up. According to the Miami Herald:

Most of the money was paid in early 2008, weeks after Rivera—then a member of the Florida House of Representatives—helped run a political campaign backed by the dog track to win voter approval for Las Vegas-style slot machines at parimutuel venues in Miami-Dade County.

At the time the contract was signed, Millennium’s sole corporate officer was Rivera’s godmother, Ileana Medina…

Roberto Martinez, an attorney for the dog track, said it was Rivera who first approached the track owners in 2006 asking to manage the slots campaign, and it was Rivera who suggested that the contract go through Millennium, rather than to Rivera directly. Flagler’s contract with Millennium was signed by both Rivera and Medina.

This appears to have emerged from an earlier Miami Herald investigation, which found last year that Rivera had falsely claimed on official forms that he’d worked for the US Agency for International Development. (When USAID said they’d never heard of Rivera, he filed new disclosures that failed to account for the $30,000 he’d earlier claimed as USAID salary.)

For Rivera’s part, he says his mom’s firm assigned him to the slots campaign after the dog track had hired the firm, which would make it (under to Florida’s quaint lobbying laws) just another moonlighting job by a sitting legislator. Except the Herald points out in an earlier article that Rivera hasn’t claimed any income from outside consulting work “since 2003.”

This is not Rivera’s first time in the barrel. In past years, he’s been charged with domestic abuse. And once, on a Miami freeway, he used his car to ram and disable a truck carrying flyers for one of his political opponents. Yet he’s set to be sworn in as a US congressman on January 5.

So where’s his political cover coming from? Largely from his close relationship with Rubio, the tea party darling who’s on virtually every Republican’s short list for president or veep in 2012. They’re friends from way back, when Rubio was speaker of the Florida House from the district neighboring Rivera’s. They even went in on a house together in Tallahassee, the state capital, in 2005…a house that went into foreclosure earlier this year when Rivera and Rubio failed to pay the mortgage. (The duo owed $138,000 in interest and principal, which was $3,000 more than they’d paid for it. Strategic default, anyone?)

But it goes deeper than that. Before holding elected office, Rivera was a big-swinging lobbyist in the RNC and the now-beleaguered Republican Party of Florida, who issued Rubio a “business” credit card that he burned up with impunity, charging minivan repairs, wine purchases, and flights cross-country for health-care industry lobbyists. Criminal investigators have subpoenaed Rubio’s charge records, and some were leaked to the press during his Senate run, but he’s refused to release a full accounting of his party spending spree to the public. (The then-chairman of the RPOF, Jim Greer, is in jail on felony charges for funneling nearly a quarter of a million dollars into his personal accounts.)

There’s no telling if this latest Rivera scandal will hurt Rubio; previous brouhahas certainly haven’t damaged either poiltico’s ambitions. They certainly know how to circle the wagons. Earlier this year, when Rubio was out stumping for his buddy Rivera, the Herald figured they might catch the soon-to-be senator in a moment of candor, but to no avail:

Since Rubio has a financial commitment with Rivera, it seemed reasonable to ask him if he knew how Rivera earns his money. “You need to ask him,” Rubio said. “I’m here to talk about my campaign.”

Rivera said: “Look at the financial disclosure forms. They speak for themselves.”