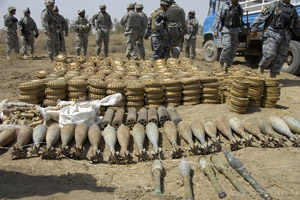 <strong>A large weapons cache discovered in 2008 by the Iraqi National Police and US troops.</strong> <a href="http://www.flickr.com/photos/soldiersmediacenter/2431787876/">US Army Spc. Daniel Herrera</a>/Flickr

This story first appeared on the Center for Investigative Reporting website.

No one deals more weapons to the rest of the world than we do. During 2008 alone, the United States drummed up an extraordinary $37.8 billion in arms-transfer agreements, largely benefiting key allies in Africa and the Middle East.

But the US also may do more than virtually any other country to keep track of its weapons, as well as to halt—or at least actively monitor—bad actors and rogue governments seeking to obtain deadly devices.

Details about that global arms trade are emerging in thousands of classified documents unleashed on three major occasions this year by the anti-secrecy group WikiLeaks, including the State Department cables now making daily headlines.

The suddenly available and unregulated information has Matt Schroeder worried. An arms expert at the Federation of American Scientists (FAS), Schroeder argues the records could alert illicit weapons traffickers and insurgents to ongoing investigations and surveillance, causing them to sever contact with undercover operatives, destroy critical evidence or move their operations.

“The point is not that this will necessarily happen,” Schroeder recently told the Center for Investigative Reporting. “It illustrates the impossibility of fully heading off the negative consequences of declassification done in this way.”

It’s no small matter that Schroeder and the non-partisan group he works for are criticizing WikiLeaks. Manhattan Project scientists who designed the first atomic bombs founded FAS more than half a century ago, after coming to the conclusion that their lives would be better spent preventing nuclear warfare. To that end, FAS has fought relentlessly to unearth secret details about the US government’s nuclear weapons policy and teach the public how illicit small arms move around the world.

But WikiLeaks’ document dump is a different beast, Schroeder says. He and other experts could draw some insight from leaked material referring to the use of lethal weapons. But he believes it ultimately doesn’t do much to serve the public interest, since so many of the documents amount to field reports written by people who may or may not know what they’re talking about. For careful analysts anxious to confirm whether a discovered cache involves deadly surface-to-air missiles or simple rocket-propelled grenades, the field reports are largely useless without being verified or vetted.

Using the Freedom of Information Act, Schroeder cleared up inaccurate military reports from 2007 that a highly dangerous missile system was discovered northeast of Baghdad. It turned out to be a less-threatening homemade RPG launcher.

Schroeder points to the prolific gunrunner and former Russian military officer Viktor Bout, who today awaits trial in the United States. Bout may never have been stopped if leaked documents tipped him in advance, Schroeder said.

Extradited to the United States recently from Thailand, Bout’s surprise capture followed a DEA-led sting in which he allegedly attempted to sell assault rifles, landmines, armor-piercing rocket launchers and more to paid informants posing as Colombian guerrillas. Nicknamed the “merchant of death” partly for his purported role in arming warlords and human rights violators, Bout’s trafficking crisscrossed the African continent, the Middle East,and south-central Asia, according to UN reports and other accounts.

“If there are documents valuable from a policy perspective, why not focus on those?” he says. “Why is it necessary to dump 200,000 documents into the public domain, ever? What does this gain other than more notoriety for WikiLeaks?”

So what undermining information might the WikiLeaks documents actually contain? One report describes a certain north African country supplying al Qaeda with dozens of air-to-air missiles, which were to be stored in Iran before making their way to Afghanistan. Other documents discuss a rocket-propelled grenade launcher made in Iran and used by the Taliban to shoot down coalition aircraft. There’s an Afghan rebel leader arranging to buy remote-controlled rockets from the North Korean government.

The list goes on, according to a Dec. 6 story from the New York Times:

Wielding surveillance photos and sales contracts, American diplomats have confronted foreign governments about shadowy front companies, secretive banks and shippers around the globe. American officials have tried to block a Serbian black marketer from selling sniper rifles to Yemen. They have sought to disrupt the sale of Chinese missile technology to Pakistan, cables show, and questioned Indian officials about chemical industry exports that could be used to make poison gas.

Disclosures about gunrunning and weapons proliferation aren’t the only concern FAS and other critics have about WikiLeaks, however. It’s the movement for more sunshine in Washington that may be at risk, too.

In addition to Schroeder, FAS is home to one of the clearest voices in Washington on openness—government transparency expert Steven Aftergood, who regularly publishes classified or otherwise restricted materials on his blog, Secrecy News. With FAS behind him, Aftergood in August obtained and released a scientific advisory board report not available to the public that described the benefits of interrogating subjects without coercion. He’s published what amount to catalogs of destruction that describe in significant detail weapons systems used by the Army, from Hellfire missiles to Abrams tanks.

But Aftergood in recent months has published multiple critical assessments of WikiLeaks. He wrote on Nov. 29 that Wikileaks is widely described as a “whistleblower site,” although its attention is not narrowly focused on corruption or specific revelations that expose how the truth is being abused. Instead, Aftergood concluded, WikiLeaks is pouring tens of thousands of documents into public hands, and the only thing that unites its three major spills this year is the fact that the material is classified.

Disabling secrecy in the name of transparency would be a sensible goal—if it were true that all secrecy is wrong. But if there is a legitimate role for secrecy in military operations, in intelligence gathering or in diplomatic negotiations, as seems self-evident, then a different approach is called for.

Aftergood is an authority on the Freedom of Information Act, and he relies on it frequently, sometimes taking the government to court when it stonewalls or simply refuses to turn over information that should be in the public record. Few people understand just how convoluted and bureaucratic the nation’s rules are for classifying government documents, and for that reason many relish what WikiLeaks has done. Under the current system, it can take decades for journalists and academics to tell the full story of one president’s foreign diplomatic strategy, a CIA plot to disrupt perceived enemies abroad or an ill-advised military intervention.

When a clearer picture emerges, many of the responsible officials are enjoying retirement, occasionally appearing on Sunday morning talk shows but not answering for decisions they made when it mattered. Why should Americans have to wait so long to know the truth, in many cases just so political leaders can avoid being embarrassed?

While it’s unlikely to be touted as a major achievement for Obama, and it’s less likely to attract the attention of mainstream journalists, major reforms of government classification have already begun, moving the United States away from the Cold War shadow it’s lived in for decades. For the first time ever, the US officially revealed how many nuclear weapons were in its arsenal—5,113 warheads as of September 2009. It published an unclassified description of the country’s nuclear weapons policy, too—another first. (Someone leaked the same document in 2002, infuriating then-Defense Secretary Donald Rumsfeld: “Whoever leaked it violated federal criminal law.”) Such information is vital for understanding how to move forward with arms control, Aftergood contends. And he attributes these changes to political advocacy rather than a WikiLeaks-style subversion of secrecy.

Aftergood’s harshest take yet on WikiLeaks appeared over the summer. He referred to earlier leaks from the organization as “a kind of information vandalism” that didn’t appear motivated by justice and integrity in public affairs. WikiLeaks publicized the rites and secret rituals of private organizations like sororities and the Masons. It published the full text of pirated books without permission. It’s unclear if any of the site’s disclosures so far will have the same impact as the photos from Abu Ghraib, which led to investigations, congressional hearings and lawsuits.

Much could be forgiven to Wikileaks is it were true that its activities were succeeding in transforming government information policy in favor of increased openness and accountability—as opposed to merely generating reams of publicity for itself… Which US government programs have been cancelled as a result of Wikileaks’ activities? Which government policies have been revised? How has public discourse shifted?

It’s impossible for critics to claim WikiLeaks has made no difference at all. Records the site released in October show that thousands more civilians were killed in Iraq than previously reported, with details available for some of the more brutal cases. That prompted even Aftergood to partly defend the spill: “This kind of material properly belongs in the public domain, as a last sign of respect to the victims and as a rebuke to the perpetrators and their sponsors.”

A conclusion about the site isn’t simple when such essential truths emerge. But one thing’s for certain: WikiLeaks has forever altered the debate about official secrecy.