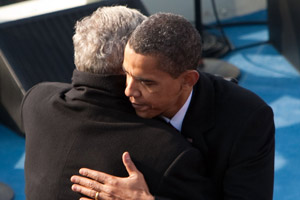 In its first months in office, the Obama administration sought to protect Bush administration officials facing criminal investigation overseas for their involvement in establishing policies the that governed interrogations of detained terrorist suspects. A “confidential” April 17, 2009, cable sent from the US embassy in Madrid to the State Department—one of the 251,287 cables obtained by WikiLeaks—details how the Obama administration, working with Republicans, leaned on Spain to derail this potential prosecution.

Soon after the request was made, the US embassy in Madrid began tracking the matter. On April 1, embassy officials spoke with chief prosecutor Javier Zaragoza, who indicated that he was not pleased to have been handed this case, but he believed that the complaint appeared to be well-documented and he’d have to pursue it. Around that time, the acting deputy chief of the US embassy talked to the chief of staff for Spain’s foreign minister and a senior official in the Spanish Ministry of Justice to convey, as the cable says, “that this was a very serious matter for the USG.” The two Spaniards “expressed their concern at the case but stressed the independence of the Spanish judiciary.”

Two weeks later, Sen. Judd Gregg (R-N.H.) and the embassy’s charge d’affaires “raised the issue” with another official at the Ministry of Foreign Affairs. The next day, Zaragoza informed the US embassy that the complaint might not be legally sound. He noted he would ask Cándido Conde-Pumpido, Spain’s attorney general, to review whether Spain had jurisdiction.

On April 15, Sen. Mel Martinez (R-Fla.), who’d recently been chairman of the Republican Party, and the US embassy’s charge d’affaires met with the acting Spanish foreign minister, Angel Lossada. The Americans, according to this cable, “underscored that the prosecutions would not be understood or accepted in the US and would have an enormous impact on the bilateral relationship” between Spain and the United States. Here was a former head of the GOP and a representative of a new Democratic administration (headed by a president who had decried the Bush-Cheney administration’s use of torture) jointly applying pressure on Spain to kill the investigation of the former Bush officials. Lossada replied that the independence of the Spanish judiciary had to be respected, but he added that the government would send a message to the attorney general that it did not favor prosecuting this case.

The next day, April 16, 2009, Attorney General Conde-Pumpido publicly declared that he would not support the criminal complaint, calling it “fraudulent” and political. If the Bush officials had acted criminally, he said, then a case should be filed in the United States. On April 17, the prosecutors of the National Court filed a report asking that complaint be discontinued. In the April 17 cable, the American embassy in Madrid claimed some credit for Conde-Pumpido’s opposition, noting that “Conde-Pumpido’s public announcement follows outreach to [Government of Spain] officials to raise USG deep concerns on the implications of this case.”

Still, this did not end the matter. It would still be up to investigating Judge Baltasar Garzón—a world-renowned jurist who had initiated previous prosecutions of war crimes and had publicly said that former President George W. Bush ought to be tried for war crimes—to decide whether to pursue the case against the six former Bush officials. That June—coincidentally or not—the Spanish Parliament passed legislation narrowing the use of “universal jurisdiction.” Still, in September 2009, Judge Garzón pushed ahead with the case.

The case eventually came to be overseen by another judge who last spring asked the parties behind the complaint to explain why the investigation should continue. Several human rights groups filed a brief urging this judge to keep the case alive, citing the Obama administration’s failure to prosecute the Bush officials. Since then, there’s been no action. The Obama administration essentially got what it wanted. The case of the Bush Six went away.

Back when it seemed that this case could become a major international issue, during an April 14, 2009, White House briefing, I asked press secretary Robert Gibbs if the Obama administration would cooperate with any request from the Spaniards for information and documents related to the Bush Six. He said, “I don’t want to get involved in hypotheticals.” What he didn’t disclose was that the Obama administration, working with Republicans, was actively pressuring the Spaniards to drop the investigation. Those efforts apparently paid off, and, as this WikiLeaks-released cable shows, Gonzales, Haynes, Feith, Bybee, Addington, and Yoo owed Obama and Secretary of State Hillary Clinton thank-you notes.