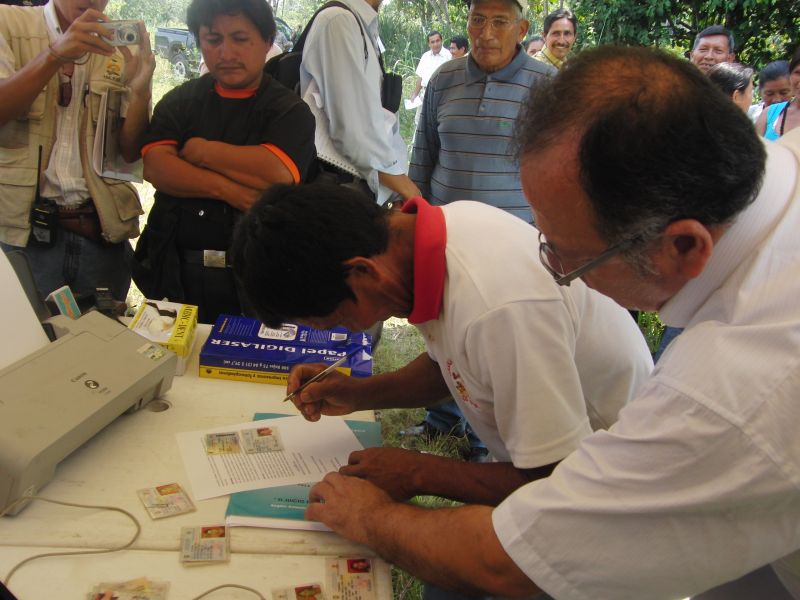 Photos of re-signing event in Lago Agrio courtesy of the Amazon Defense Coalition.

The long legal case against Chevron over environmental damage wrought by drilling operations in the Amazon may finally be drawing to a close, as the parties in the case this month began filing their final arguments. But Chevron has made several attempts to get the case thrown out entirely–including making claims that the plaintiffs in the case don’t actually exist.

Last month, Chevron made accusations of an “elaborate forgery of plaintiffs’ signatures” in the suit. When the complaint was first filed in 2003, 48 indigenous residents of Lago Agrio, Ecuador, affected by the legacy of toxic pollution left behind by Texaco (a company Chevron later acquired) signed on as plaintiffs. Chevron claims that its forensics expert has determined that 20 of those signature were forged, and that therefore the lawyers representing them in the case did not truly have consent.

Chevron vice president and general counsel R. Hewitt Pate almost sounded like an activist in Chevron’s press release last month, pledging to “seek full redress against the harm that has been done in the name of the Ecuadorian plaintiffs and to hold accountable all of those who have knowingly participated in this unlawful scheme.” The irony, of course, is that the plaintiffs are seeking compensation for what they have described as massive environmental and human health harm caused by decades of oil extraction in the region that was never fully remediated.

Chevron says this is evidence that the suit has been “tainted with corruption from the very beginning and must be terminated.” The company’s lawyers filed a motion in the provincial court asking the judge to therefore declare the lawsuit “null and void.”

In response, 24 of the plaintiffs involved in the case held an event this week to re-sign the documents, a symbolic effort to show that they are, in fact, real and they do have very real complaints against Chevron, namely the billions of gallons of toxic waste that they say was dumped in their Amazon communities. (The total number of plaintiffs is now down to 47; one has died since the suit was originally filed.) The lawyers for the plaintiffs say the forgery claims show that Chevron is getting “desperate” in these last-ditch efforts to get the case thrown out, rather than challenging the question at stake in the suit—whether the oil giant is indeed responsible for the alleged damage caused by its subsidiary.

“It’s part of their fantasy of saying that this lawsuit doesn’t really exist,” Karen Hinton, spokesman for the plaintiffs, tells Mother Jones. “The only way to maneuver now is to discredit the court, the lawsuit itself, the plaintiffs and the lawyers—anyone associated with this—through various personal vilification campaigns.”

The company has also sought footage from a documentary filmmaker that they believe will show misdeeds on the part of the plaintiffs.

The Ecuadorian court is supposed to rule on the case sometime before May, though it’s likely that it will remain tied up in this legal wrangling for some time. If the forgeries claim is any indication, Chevron will throw every obstacle it can think of in the way of a final decision.