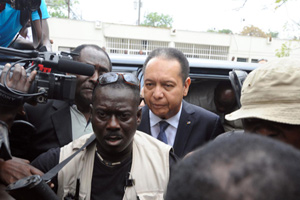 Editor’s note: Mac and MoJo photo editor Mark Murrmann are in Haiti all week. Read her previous posts here, and read her features on AWOL aid and the rapists terrorizing the tent camps. And check out more of Mark’s photos here.

On Sunday night, former Haitian dictator Jean-Claude “Baby Doc” Duvalier arrived in Port-au-Prince on an Air France flight after 25 years of exile. Today the surprises continued when police and SWAT swarmed Duvalier’s hotel and, after hours of comings and goings of lawyers, prosecutors, and ambassadors, escorted him to the city courthouse, where he was charged with embezzlement, corruption, and assassination.

What’s he doing here? Nobody knows. Rumors are flying on the street and in newscasts that the Americans and/or the French orchestrated his return to mess with President René Preval, who’s been accused of corrupting the recent, still-contested elections. (Both governments have denied knowing about the trip or its purpose). Another theory is that Preval invited Duvalier here just to arrest him, as a means of taking attention off the elections and the abysmal post-earthquake conditions. Another’s that the 59-year-old Duvalier’s unhealthy appearance is proof that he’s terminally ill and just wanted to come back to Haiti to die. Or perhaps he came to get back into politics.

Both Preval’s and Duvalier’s camps have yet to address the question. For the duration of his short stay, Duvalier has remained mostly silent, only saying at one point that he came back to help his country. Regardless of the impetus for the trip, many have criticized its timing, saying that Baby Doc’s appearance could further destabilize a political system that’s already in crisis. 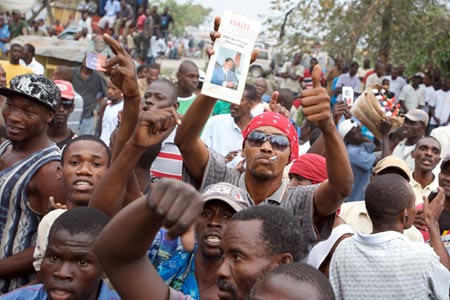 Baby Doc supporters outside the Port-au-Prince courthouse. Photo by Mark MurrmannWhat’s his reception been like? Duvalier does still enjoy his share of support among the populace. A few hundred supporters met him at the airport, and today hundreds more stood outside the courthouse chanting pro-Duvalier slogans, even trying to storm the gates after yelling, “Time is up!” Many of the supporters were too young to have been alive during his reign, which was characterized by the violent persecution of political opponents and rampant corruption. But some older Haitians, Duvalierists or no, remember the Baby Doc years as an improvement over the current status quo.

“What have [his] supporters been telling you?” a hotel proprietor in his mid-50s asked me. “That they weren’t hungry?” Yes. They also told me there were no heaping piles of burning trash in the streets, that people had jobs, that the roads were paved, that there was less violence—non-government violence, anyway. You could park your car in the street without worrying it would be stolen, and you were less likely to feel like you needed to carry a gun.

“That’s true,” the hotelier said. “At the time, I thought it was bad, real bad, because you couldn’t talk about politics without getting killed. But when I look at what’s going on around here now? This is way worse.”

So what now? The Haitian government says it’s reopening a 2008 criminal case against Duvalier for charges of corruption, embezzlement, and assassination. It’s not clear if he thought he could dodge these charges. As the Institute for Justice and Democracy in Haiti explains, Baby Doc is still liable for what took place during his 15 years in power:

Mr. Duvalier is not protected against prosecution by any statues of limitations. According to Article 466 of the Haitian Code of Criminal Procedure, the proceedings for misappropriation of funds are not proscribed because of the continuing prosecution of the case from 1986 to 2008. The political killings and torture are not proscribed because they are crimes against humanity, which are imprescriptible under international law.

Human rights advocates are calling for even more crimes to be added to the list of allegations. There’s plenty to chose from: Human Rights Watch estimates that Baby Doc and his father François “Papa Doc” were behind the deaths of 20,000 to 30,000 Haitians.

Meanwhile, Duvalier has been released back to his hotel and ordered not to leave Haiti.