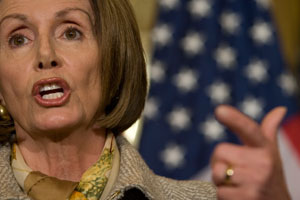 Democrats are entering the new Congress on the defensive—or, as Rep. Anthony Weiner (D-N.Y.) has put it, “in the fetal position.” Republicans have already scheduled a vote to repeal the health care reform bill and rewrite the House rules to make it easier for the GOP to attack other cornerstone accomplishments of the Obama administration. In other words, the drubbing that Democrats received in the November elections was only a precursor for what’s to come.

Democrats are now preparing to wage their own battle to defend health care reform from the assault the GOP has vowed to mount over the next two years. Though the repeal effort is likely to fail in the Senate—and would probably be vetoed by President Obama in any case—the Republicans are just getting started, with plans to cut funding and roll back smaller pieces of the legislation further down the road.

Having kept a wary distance from health reform during the midterms, Democrats have begun to roll out a campaign to protect their landmark legislative achievement—a campaign that’s simultaneously self-deprecating and self-congratulatory, aggressive and conciliatory.

Celebrate the Revived Debate: Vowing to “go on the offensive,” Democrats have scrambled this week to discuss health care reform on their own terms before the Republicans charge ahead with their repeal effort. Rather than lament the GOP attacks, they’re spinning the moment as a PR opportunity. “The more we talk about this, the better…it gives us an opportunity to seize the debate and drive it home,” said Rep. Sandy Levin (D-Mich.), the outgoing chair of the House Ways and Means Committee. Some are readily willing to admit that the Democrats failed to elucidate what was in the bill the first time around and that the public still doesn’t understand what reform means. “We did a lousy job throughout the health care debate in explaining what was in it…we’ve got to be clear and specific,” Rep. Peter Welch (D-Vt.) told Mother Jones. He added, “My goal is to let Americans know what it is the repeal would do.”

Welch is pushing to include amendments to the House GOP’s repeal bill that would force members to vote on preserving some of reform’s most popular provisions. The GOP leadership has already vowed to prohibit the opposition from attaching any amendments to the repeal bill. But Democrats are now rattling off the list of popular benefits every time they’re in front of a podium. “We need to bring this out for all to see—the more they see, the more they’ll like it,” said Levin.

Denigrate the Revived Debate: At the same time that House Democrats are welcoming the opportunity to talk up health care reform, they’re simultaneously dismissing the GOP for wasting everyone’s time by pushing for a repeal bill that’s doomed to fail. Voters, they argue, want Congress to focus on jobs and the economy, not dwell on health care reform. “It is disingenuous—it is nothing but political theater,” said Rep. Rosa DeLauro (D-Conn.), at a Democratic press conference on Tuesday. Added outgoing majority whip Steny Hoyer (D-Md.), “The American public wants to see progress, not division—they want to see jobs, not simply political rhetoric.”

But while Democrats criticize Republicans for spending valuable time on a fruitless repeal effort, they’re also slamming the opposition for rushing the process by forgoing the typical deliberations surrounding a piece of legislation. “We spent thousands of hours on hearings [for health-care reform]—they’re going to pass a bill with no hearings, no input, no review,” said Rep. Debbie Wasserman-Schultz (D-Fla.), calling the approach “autocratic.”

Keep It Personal: Democrats are hoping to cut through the partisan warfare by bringing average American voters into the spotlight. Patient horror stories and first-person testimonials routinely peppered speeches during the debate over the bill itself. And Democrats are now trying to bring patients who’ve benefited from reform into the conversation. At the Tuesday press conference, Wasserman-Schultz explained how a twentysomething constituent with lupus was allowed to remain on her parents’ insurance plan. And she described a voter approaching her in a grocery store, grabbing her by the shoulders, and thanking her for passing legislation that saved her $3,000 in health care bills. “We need to tell it straight and talk real sense with real stories, to personalize this,” Levin said, adding that a similar approach helped the party fight off Social Security privatization during the Bush era.

Invoke Bipartisanship: Having lagged behind the GOP on the issue, Democrats have rapidly gotten more aggressive: In the past two days, Sen. Chuck Schumer (D-N.Y.) demanded that all Republican opponents of health reform drop their federal health plans (only a tiny handful have done so), and Senate Democratic leaders have slammed incoming House Speaker John Boehner for threatening to take away a drug discount for Medicare patients that went into effect on January 1. But for the moment, at least, Democratic leaders have still adopted a conciliatory tone toward the GOP as they attack health care repeal. “I am hopeful that we can work together,” said Hoyer, describing the handoff to the House Republican leadership as a “very positive transition” with a “much better attitude” than in the past.

Pelosi herself declared Tuesday that “the Republicans will find in the Democrats a willing partner” if they support policies that would “create jobs, help the middle class, and reduce the deficit.” Pelosi said of the incoming Republican majority: “I wish them success—and I look forward to working with them.” It was a gracious handoff on her last day as speaker. We’ll see how long that sentiment lasts.