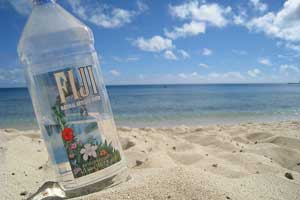 Despite selling, you know, water, Fiji Water is not the most transparent corporation. The company, the subject of a groundbreaking investigative feature we ran in 2009, is now the target of a lawsuit for deceptively marketing itself as “carbon-negative.” A US District Court class-action suit filed by a Newport, California, firm on behalf of a Santa Ana woman named Desiree Worthington accuses Fiji Water of using a practice known as “forward crediting”: essentially, giving yourself credit for carbon reductions that haven’t happened yet.

In the lawsuit, Worthington argues that she paid more for Fiji Water specifically because it advertised itself as a carbon-negative product. She says she expected that the “carbon-negative” label meant that Fiji was currently taking more carbon out of the environment than it was producing. This is consistent with the company’s view: Fiji Water claims on its website to have been “a carbon-negative brand” since 2008, “under which we will continue to offset 120% of our emissions” (emphasis mine). However, under the forward crediting model, the offsets do not need to be currently occurring, they can simply be anticipated actions. Indeed, Fiji Water has said in a press release that the offsets necessary to make it “carbon-negative” will not be realized until 2037.

Scott J. Ferrell, lead counsel for the class-action suit, told me that “We want Fiji Water to stop distorting its environmental record to push sales of overpriced bottled water. It is unconscionable for Fiji Water to charge double the price of its competitors by convincing consumers that drinking Fiji Water helps the environment, when in reality the opposite is true.”

Fiji Water is indeed a rather egregious example of greenwashing. The water is taken from a Fijian aquifier, bottled in a diesel-fueled factory in plastic shipped from China, and then shipped over the ocean to countries around the world. Although shipping by ocean is a relatively environmentally friendly way to transport things, Fiji’s unique location means it has to travel farther to US consumers than water from, say, Shasta, California.

To be sure, there have been some improvements since Anna Lenzer wrote about the company’s greenwashing practices, including its forward crediting model, in her 2009 Mother Jones feature. Fiji Water’s site says the company has now planted 250 acres of trees in Fiji, which was not the case in 2009. But it’s not enough to offset  the company’s operations by a long shot. Two-hundred fifty acres of rainforest stores around 400 metric tons of carbon. Fiji Water disclosed it produced 85,396 tons of CO2 and other greenhouse gases in 2007. Since 2007, Fiji Water sales have gone up appreciably, and in 2008 Fiji began claiming it was carbon-negative. To offset 120% of the company’s emissions for 2008, 2009, and 2010, you’d have to plant or conserve nearly 200,000 acres of rainforest. The company might have some catching up to do to match its claim that buying a 500 ml. bottle of Fiji Water removes as much carbon from the Earth as “turning off a light before you leave home for the day.” (This quote is from the now-defunct FIJIGreen.com site, which was taken down sometime during 2010.)

Fiji Water has yet to respond to the suit. Ferrell says “If this lawsuit forces Fiji Water to actually turn itself into a carbon-negative operation, we would be delighted.” As for Worthington, she’s now switched to drinking the greenest water of all: municipal tap.