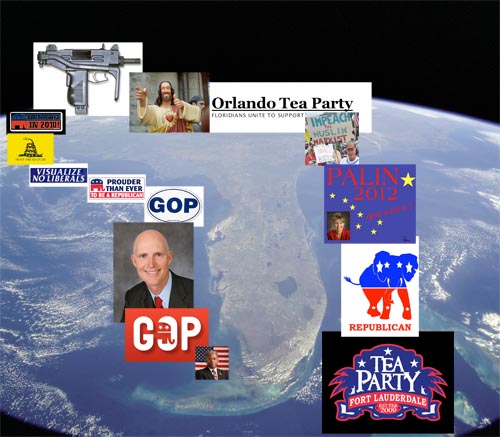 Over the next few weeks, yours truly is going to highlight the political sideshow that is the Sunshine State in a little feature I’d like to call “What’s the Matter With Florida?” From the new billionaire ex-CEO governor who can’t count or set a budget, to his regulatory logjamming and pro-corporate political appointments, to the GOP-run legislature’s fight against fair voter districting (2000 anyone?), to statewide Republicans’ preoccupation with residents’ poop tanks—it’s a real-time lesson in what conservative-dominated governance looks like in America after George W. Bush.

As a taste, here’s but a single development on a single day:

Screw the Fountain of Youth. Florida House Republicans have discovered something better in one of their smoky, hubris-filled back rooms: a hot-tub time machine.

At least, that seems the most plausible explanation for today’s developments: They dropped trou, jumped into the warm frothy waters of their  whirlpool, and used it to travel six years hence, when they shall continue to reign benevolently over the state’s lower legislative chamber. The St. Petersburg Times reports:

We’re hearing from a top Miami Republican lawmaker that Miami-Dade’s Republican delegation, the biggest in the state, voted as a bloc to make Rep. Richard Corcoran House Speaker in 2017-18. Though he’s a Suncoast guy, Corcoran had big Miami bonafides: He was the chief of staff to Miami’s only House Speaker, Marco Rubio, the current U.S. senator and Republican star.

…from what the lawmakers and consultocracy are telling us, Corcoran is well on his way to succeeded Chris Dorworth who will succeed Will Weatherford who will succeed current House Speaker Dean Cannon.

Wuzzat? You wanted to know how it’s possible that a political party already has its next four speakers of the 120-seat Florida House picked out, when voters have yet to go to the 2012, 2014, and 2016 polls and grant that party a majority of the seats? And you don’t buy the hot-tub thing?

Well, the state House isn’t exactly a dynamic body politic, even as legislatures go. The last time the Dems held a majority of seats was 1996. And the last time the legislature changed hands before that was—well, never. Florida was a Democratic haven until the year Atlanta hosted the Olympics, George Costanza’s fiancee died, and Abigail Breslin was born. Since then, though, the GOP has elevated power-wielding to a high art in Tallahassee, holding 81 House seats to the Dems’ 39. (That’s actually a smaller percentage-wise advantage than the Republicans hold in the Senate, where there are just 11 Democratic lawmakers.)

And nobody wields power like the South Florida Republican acolytes of Marco Rubio, the state’s newest senator in Washington. Rubio himself served as House speaker in 2007 and 2008, and his familiarity with party credit cards and health care lobbyists is legendary. One of his closest cronies, David Rivera, experienced a similar meteoric rise this year from the state legislature into the US House, where his recent election has been thrown into doubt by a criminal investigation surrounding his mom, her lobbying firm, a dog-racing track, and half a million dollars. (When not avoiding censure by congressional colleagues, Rivera has been known to ram opponents’ trucks on the highway, fight domestic-abuse allegations, and refrain from explaining where his income comes from.)

In that sense, Corcoran is the next—or, the next after the next after the next—in a long succession of GOP Rubio groupies who suddenly fall into wealth and standing. As Rubio’s chief of staff, Corcoran ran up big tallies on his GOP credit card—like $60,000 in a single two-month period big, including $1,600 at a frame shop, $1,200 for handmade chairs for some political buddies, and nearly $7,000 to hit a Rubio family reunion at a Georgia resort. In fact, his spending spree was part of a GOP pattern that one Miami ethicist called “a total institutional failure of candor, accountability, transparency and internal controls that is wholly unacceptable in the private sector and even among nonprofits.”

Speaking of which: Corcoran also got $113,000 grand from Rubio’s political committee to write a book, 100 Innovative Ideas for Florida’s Future in Rubio’s name.

Given Corcoran’s, um, anointment for eventual anointment today, we can assume he’s had a clairvoyant vision of Florida’s future for awhile. And we can assume something else, too: Respecting voters’ power and observing basic standards of ethical decency aren’t among the innovative ideas in his party’s book. 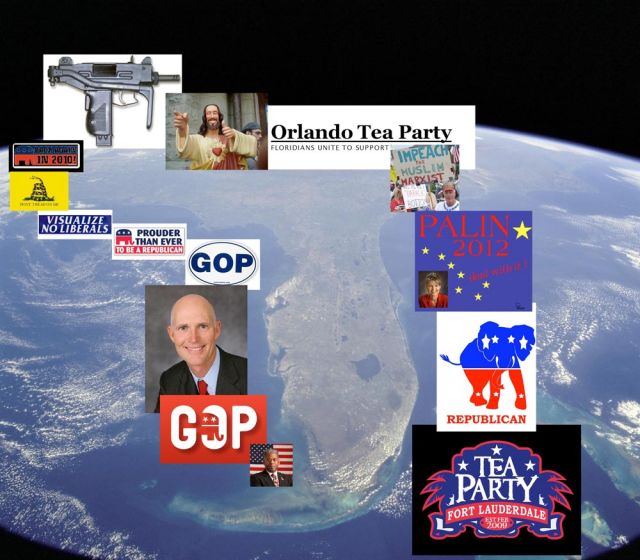