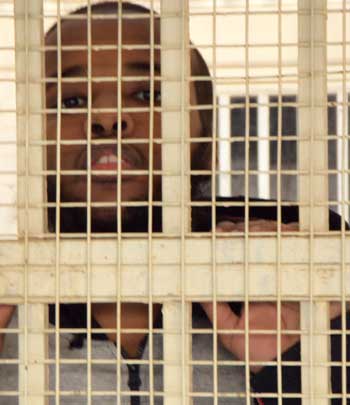 FBI agents are taking advantage of an American teenager’s detention in Kuwait to illegally harass and interrogate him without counsel, the teen’s lawyer said Wednesday. Gulet Mohamed, a Somali-born American Muslim, says he was tortured and interrogated after he was detained by Kuwaiti security officials last month. He claims that Kuwaiti interrogators asked him questions about his travels, his past, and his family that he and his lawyer believe were fed to the Kuwaitis by US officials. Kuwait now reportedly wants Mohamed deported, but he’s been added to the no-fly list. Meanwhile, FBI interrogators are continuing to interrogate him in detention and ignoring his requests to have an attorney present, his lawyer, Gadeir Abbas, says.

FBI agents’ most recent visit to Mohamed began around 10:00 a.m Kuwaiti time Wednesday, Abbas told Mother Jones. Agents, he said, questioned Mohamed for several hours, and Mohamed’s uncle (who lives in Kuwait) and brother (who traveled there after Mohamed was detained) were present for part of the time. Mohamed repeatedly told the agents that he did not want to answer questions about his travels to Somalia and Yemen without his lawyer present, according to Abbas. (Mohamed, his family, and his lawyer say the teen was visiting family and learning about the heritage of his father, whom he never knew.)

Mohamed has made similar requests for counsel during previous FBI visits, Abbas said. US law and constitutional precedent generally require that interrogations cease once a suspect asks for his lawyer. The FBI has countered that under Kuwaiti law Mohamed doesn’t have the right to counsel while being interrogated, according to Abbas. That seems to be an agency line: after I called the bureau for comment on Abbas’ allegations, Wright urged me to ask the Kuwaitis about Mohamed’s right to counsel. After I noted that US law is generally understood to restrain FBI agents (even in foreign countries) from interrogating an American after he has asked for a lawyer, Wright acknowledged that the FBI is “subject to the rules of the FBI and the rules of the [Department of Justice] for criminal prosecution,” but added that the agency didn’t “want to be perceived as commenting on [Kuwaiti] rules or laws.”

At one point during Wednesday’s interrogation, Abbas said, the FBI agents performing the interrogation stood up and started shouting and physically crowding Mohamed. They also reached for his pockets—a move that Mohamed’s brother and uncle believe was an attempt to confiscate the cell phone Mohamed has been using to communicate with the press and his lawyer. At that point, Abbas says, “a Kuwaiti official came into the room and directed the FBI agents to sit down and calm down and told them not to treat Gulet like that.”

“In the absurd world that is represented in this case, Gulet’s torturers are intervening to protect Gulet from his own government,” Abbas said. “Not only is the FBI’s behavior grossly immoral and insensitive to the plight that Gulet Mohamed has endured and is currently facing, but the FBI’s opportunistic actions to leverage Gulet’s dire situation to pepper him with senseless questioning is illegal.”

[UPDATE: Late Wednesday, Abbas sent a letter to Attorney General Eric Holder outlining his allegations and asking Holder to launch “an immediate investigation into the conduct of the FBI agents involved.” More on that here.] 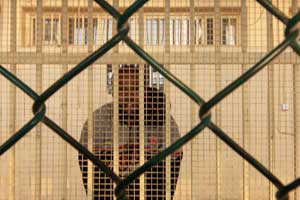 Mohamed, his lawyer said, is a victim of “proxy detention,” where the US government asks a friendly foreign country to do the dirty work of harshly interrogating an American citizen it suspects of terrorism. Last Friday, in the wake of stories about Mohamed in the New York Times, the Washington Post, and other major news outlets, the Obama administration finally commented on the story, via a State Department spokesman who denied that Mohamed had been detained “at the behest of the United States government” and promised that the teenager was being offered consular services.

Almost a week later, Mohamed remains in detention. He’s still on a no-fly list, and the White House won’t return calls asking for comment about his situation. It’s possible that the US government believes Mohamed is a terrorist. He recently traveled to Somalia and Yemen, two countries known for harboring Islamic extremists. The questions he says he was asked by Kuwaiti and FBI interrogators suggest that he may have been under surveillance while he was in the US. But being able to return to the United States and facing charges (if there are any) with the assistance of a lawyer are fundamental constitutional rights—rights that Mohamed is currently being denied. So what’s the reason the US claims it can’t help him? They’re desperate to protect his privacy, according to the State Department.

Agency public affairs officers have said that they cannot release information about Mohamed or reveal any suspicions the government might have about him because he has not signed a Privacy Act waiver. According to Abbas, Mohamed only recalls signing a document offered to him by US officials in late December, shortly before his family and Abbas became aware that Mohamed was being detained. The document was presented as a contact form, Abbas said. “They said you’re going to be leaving in 72 hours and we want to know who to contact, so Gulet listed his mother, his brother, and his sister,” and signed the form, not realizing that it would prevent the government from providing information about him to anyone else. Mohamed didn’t recall checking any of the yes/no boxes on a second page of the form (PDF), according to Abbas. On a privacy act waiver, those boxes determine whether or not it’s okay to contact the media, Congress, someone’s employer, and so on.

Mohamed is not the first American to be subjected to “proxy detention.” Last July, 26-year-old Yahya Wehelie, another American of Somali descent who traveled to Yemen, was finally allowed to return to the US after two months stranded abroad. He only received a no-fly list waiver to return after he had “spoken with the FBI 10 times and submitted to a polygraph test,” according to the Washington Post. Like Mohamed, Wehelie says he was visiting Yemen to learn Arabic (he was also hoping to find a bride, according to the Post). Like Mohamed, Wehelie says he was beaten while in the custody of a foreign government (Egypt, in his case) and asked questions that closely mirrored those later asked by the FBI. And like Mohamed, Wehelie has not been charged with a crime.

Human Rights First’s Daphne Eviatar has a good rundown of other people who have been subjected to “proxy detention,” which she calls “the Obama administration’s extraordinary rendition-lite.”