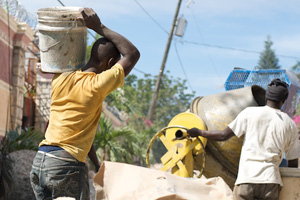 This week (or Wednesday, to be specific) is the one-year anniversary of the Haitian earthquake. As it turns out, there’s less media in Port-au-Prince than everyone had been expecting. There were indeed CNN cameramen on our flight, and there’s more press than on maybe any given Sunday, but it’s not exactly a circus. Our popular hotel seems half-deserted. As in, my photographer (MoJo photo editor Mark Murrmann) and I met with our new driver today, and he said many of the fixers are looking for work, calling each other, saying, Where are the reporters? Where’s the work at? Does anyone know any reporters who need drivers?

And there’s all sorts of events for us, like a soccer match played between two teams of amputees tomorrow, and the launching, finally, of some government housing projects, and junkets coordinated by what the long-embedded press agrees is a veritable army of PR consultants hired for the anniversary.

So what am I doing in Haiti? We’ll see, but possibly some follow-up on whatever happened to the aid dollars Americans pledged last year. (A lot of those dollars went to organizations spearheaded by Bill Clinton, who is also the cochair of the Interim Haiti Recovery Commission. But he was appointed under outgoing President René Preval, and there’s a new election soon, and Clinton isn’t a Haitian, so Haitians could see to his forced uninvolvement if they see fit. “We could fuck him so good…” says a wealthy Haitian drinking at the hotel bar.) Possibly some check-in with the underresourced rape survivors mightily battling the stupendous prevalence of sexual violence, which has actually gotten worse since the quake, but has long been a staple of Haitian society. (We had not even left the airport when I ran into a shady guy who threatened me last time I was here. And had only just been delivered our dinner at the hotel restaurant when a patron sat down with us to explain to my photographer that if you lost your erection while trying to rape a woman, you’d have to resort to violating her with a bottle, or a piece of wood, or maybe even a pen—which he helpfully pulled out of his pocket for demonstrative purposes—at which point Mark promptly slid his tumbler full of white rum under my face, which had surely gone tight with horror.) Probably we’ll spend a little time with some construction crews picking up the pieces of the destruction that are still everywhere. And definitely we’ll be on top of the results of the election commission, which is supposed to announce its investigation into fraud during November’s race, which may result in widespread riots.

Bottom line is, we’ll be looking into some of the aspects of progress over the last year. Though as we found out today, the usage of that noun is, incidentally, completely hilarious in post-quake Haiti. As in:

Photographer [to Haitian-born driver who wants to know why we’re here]: You know, we’re looking at various kinds of progress since the earthquake—