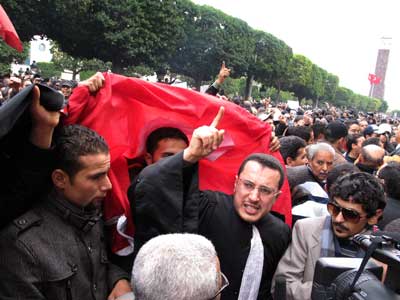 Tunis, Tunisia: Thousands of Tunisian demonstrators took to the streets of the capital before the president fled the country on Friday. | © Maxppp/ZUMAPRESS.com.

A week before the Tunisian government collapsed on Friday, with its longtime dictator fleeing the country in the face of massive popular protests, a Washington, DC public relations firm that had been hired by the government abruptly severed its relationship the North African nation.

Last May, the Tunisian regime retained the Washington Media Group, which also represents private equity funds, aerospace companies, unions, and medical research companies, and banking giant Citigroup, to help promote its image abroad. In a press release announcing the contract, WMG referred to Tunisia as an “international business success story.” At the time, John Leary, a partner at WMG, described Tunisia as a “peaceful, Islamic country” and a “stable democracy” with a “terrific story to share with the world.” (Tunisia ranks 144th of 167 countries ranked on The Economist’s Democracy Index, a widely accepted measure of political freedom. But it’s farther ahead on some measures, such as women’s rights, than most of the Arab world.) The press release also claimed the deal highlighted “the firm’s demonstrated successes on behalf of clients small and large.”

The press release did note that Tunisia is an “important ally of the United States in combating global terrorism.” A US State Department cable released by WikiLeaks came to the same conclusion:

Before they took the contract, top officials at WMG consulted with advisers in the State Department and inside and outside of government. “It was clear that there was potential to help this ally in the war on terror improve its image, mostly through digital work,” Greg Vistica, the firm’s president, tells Mother Jones. In May, Vistica said his company was “delighted with this project.”

Eight months later, though, Vistica was not so delighted. Protests in Tunisia were gaining steam, and Vistica had changed his mind about working with the regime. Last Thursday he wrote to Samir Abidi, the Tunisian Minister of Communication, terminating WMG’s contract with the country. “It was clear to us that the Tunisia government was not going to implement the recommendations and work product we provided,” Vistica says. “We felt on principle we could not work for a government that shoots its own citizens and violates their civil rights with such abuse.”

In the letter [PDF], which was obtained by Mother Jones, Vistica told Abidi his team had “done our best,” but he didn’t mince words about why he was terminating the deal:

…It has been and remains our view that improving your nation’s image in the United States or elsewhere can only be accomplished if the reputation sought is consistent with the facts on the ground.

Recent events make it clear the Tunisian government is not inclined to heed our counsel regarding meaningful reforms. Indeed, the government’s current actions and activities have undermined, or in some cases completely undone, whatever progress we made in improving Tunisia’s reputation.

For these reasons, and because we are troubled by your government’s apparent approach to important civil rights and civil liberties issues, Washington Media Group terminates its contract effective immediately.

The letter was also filed with the Justice Department.