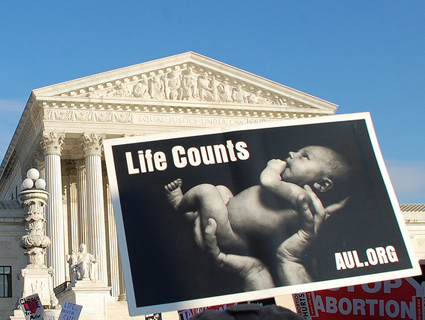 First, it was South Dakota. Then Nebraska and Iowa. The similarly worded bills, which have quietly cropped up recently in state legislatures, share a common purpose: To expand justifiable homicide statutes to cover killings committed in the defense of an unborn child. Critics of the bills, including law enforcement officials, warn that these measures could invite violence against abortion providers and possibly provide legal cover to the perpetrators of such crimes.

That these measures have emerged simultaneously in a handful of states is no coincidence. It’s part of a campaign orchestrated by a Washington-based anti-abortion group, which has lobbied state lawmakers to introduce legislation that it calls the “Pregnant Woman’s Protection Act” [PDF]. Over the past two years, the group, Americans United for Life, has succeeded in passing versions of this bill in Missouri and Oklahoma. But there’s a big difference between those bills and the measures floated recently in South Dakota, Nebraska, and Iowa.

While the Oklahoma and Missouri laws specifically cover pregnant women, the latest measures are far more sweeping and would apply to third parties. The bills are so loosely worded, abortion-rights advocates say, that a pregnant woman could seek out an abortion and a boyfriend, husband—or, in some cases, just about anyone—could be justified in using deadly force to stop it.

A Planned Parenthood official testified last week at a hearing on Nebraska’s LB 232 that such legislation “authorizes and protects vigilantes.” And it isn’t just abortion-rights advocates who fear the implications of the AUL-inspired legislation. “This could be used to incite violence against abortion providers,” said Omaha’s deputy chief of police, David Baker. The office of South Dakota’s Republican governor—no defender of abortion-rights—has called the version of the bill introduced in the state’s legislature a “very bad idea.” (Following a national outcry, the South Dakota bill was shelved.)

Lawmakers who have sponsored their own versions of AUL’s legislation, including South Dakota’s Phil Jensen and Nebraska’s Mark Christensen, say their measures were inspired by a 1999 case in Michigan, in which a pregnant woman killed her boyfriend after he punched her twice in the stomach. (Jensen did not respond to a call and an email seeking comment.) Jaclyn Kurr, who eventually miscarried quadruplets, was convicted of manslaughter based partially on the fact that she had a history of criminal offenses—a ruling that was later overturned on appeal.

The case opened a thorny debate about fetal personhood and it became a rallying cry for anti-abortion groups seeking to advance the rights of the unborn. It features prominently in the introduction to AUL’s model legislation [PDF], which was drafted by Denise Burke, the group’s vice president for legal affairs. “Applying the affirmative defense of ‘defense of others’ to protect the unborn is a victory for women and children, and opens a new chapter in the fight to protect the lives of the unborn,” Burke writes in the 9-page document. (AUL asked that questions be submitted in writing, but declined to respond to a detailed request for comment from Mother Jones.)

The Kurr episode is “a lesson Nebraska doesn’t want to repeat” Christensen said during a hearing last week on his bill. “I personally do not want to see a pregnant woman in Nebraska go through the same trauma of losing her unborn child, her baby, and then be prosecuted and punished by trying to protect the child from its attacker.”

In an interview, Christensen told Mother Jones that AUL “brought the idea” and “helped draft the language” for the bill he introduced. And he said he was unaware of the controversy a bill similar to his had caused in South Dakota a week earlier. In fact, he added, “I didn’t realize it’d been introduced other places, so I’ll have to evaluate that.”

Christensen added that he regretted citing the Kurr case in support of his legislation: “As I look more at the Michigan case, there were a lot of outlying factors,” he said. “It was probably not a good one for me to have been quoting.” After Christensen’s bill was criticized for opening the door to violence against abortion providers, he said he had decided to “narrow it down to just protecting mother and unborn child.”

AUL’s efforts to expand justifiable homicide statutes are part of a broader push by social conservatives to advance the political front lines on abortion and other social issues. After Republicans won the House of Representatives and swept to almost unprecedented state-level success in November, social conservatives were invigorated. Since state and federal legislative sessions began in January, they have pushed GOP lawmakers to introduce scores of bills aimed at promoting what they call a “culture of life.”

That effort hasn’t failed to stir up controversy. At the federal level, House Republicans have attempted to limit the circumstances under which the government would pay for abortions to cases of “forcible rape,” a measure that was eventually dropped after it caused a national furor in January. Since then, cuts in federal funding for family planning, proposals specifically outlawing funding for Planned Parenthood, a Georgia bill that could criminalize some miscarriages, and the series of AUL-backed bills allowing for justifiable homicide in defense of a fetus have all helped put the culture wars back on the nation’s front pages. With conservatives riding a wave of 2010 success and anti-Obama feeling into the 2012 elections, anti-abortion forces are just getting started.