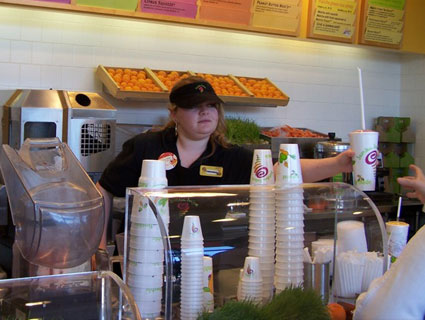 Last week in the New York Times, Mark Bittman scolded McDonald’s for turning something as inherently healthy as oatmeal into additive-laden junk food. This got me thinking about another “natural” item that fast-food chains have desecrated: the smoothie. I can make my own relatively low-calorie smoothie with three ingredients (fruit, ice, and skim milk) in my home blender. And yet fast food chains have somehow managed to mess up this simple task.

The bulletin board at the Jamba Juice near MoJo HQ welcomes customers with a colorful, friendly sign that reads, “We commit to bring you consistently great-tasting products made from simple, honest ingredients.” The Jamba Juice website highlights its “natural energy from nutritious ingredients.” Yet it’s actually impossible to get a smoothie made with a base of plain old real milk: Only soy milk can be substituted for the frozen yogurt and sherbet in the “classic” smoothies, and the light smoothies are all made with a mysterious “dairy base” that contains the artificial sweetener Splenda.

I recently asked Jillian Shamoon, the general manager at the store, why good old-fashioned milk isn’t an option. “Milk and fruit doesn’t taste good together,” Shamoon told me. “That’s probably why.” Riiight.

Then there’s the fact that a typical medium-sized Jamba Juice smoothie—the Mango-a-go-go Classic—contains 400 calories. Most smoothies from other chains, including Tropical Smoothie and Smoothie King, have similarly high calorie counts. (At all three venues, most drinks range from about 250 to 600 calories.)

For a fast-food meal, 400 calories isn’t too bad. “You certainly get some nutrients from it, although you’re getting a lot of sugars too,” says Alison Field, an associate professor at Harvard Medical School whose research focuses on the epidemiology of weight gain. “If the question is: ‘Are smoothies a better option than a Big Mac?’ then the answer is definitely yes.” (Big Macs contain 540 calories, gobs of saturated fat, and minimal nutritional value.)

The problem, Field says, is that most people aren’t drinking smoothies as alternatives to meals. Instead, they’re drinking them as snacks, or even with meals, as beverages. Gerry Chiaro is a marketing lecturer at Northwestern University and has worked as a marketing consultant for Tropical Smoothie, McDonalds, and Gatorade. He says getting consumers to regard smoothies as meals would be a tough sell. “Whether Jamba Juice intends to place [its smoothies] as a meal replacement or not, the consumer will perceive them as an on-the-go snack,” Chiaro says.

The Jamba Juice website doesn’t clearly position smoothies as either meals or snacks. However, it lists the smoothies together in one section, and puts the oatmeal, sandwiches, and “ideal meals” in another section. (The “ideal meals” are a mix of fruit, soymilk, yogurt and granola.)

Many “light” commercial smoothies contain artificial sweeteners—and customers often have to look very, very closely to discover that what they’re eating or drinking does not contain the “simple, honest ingredients” they thought it did. The Jamba Light Smoothies site (“say sayonara, calories”) and Jamba’s “nutritional information” webpage contain no Splenda logo or complete ingredient list. Only by rolling a cursor over the names of the individual smoothies can discerning customers discover that “light” means artificial sweetener. “The website is certainly not making much of a mention of [the Splenda content],” says Chiaro.

The jury is still out on whether Splenda poses a health risk, but Field says she “doesn’t see any reason” to consume artificial sweeteners because “people can change their diets in many ways to eat fewer calories.” Moreover, recent studies suggest that people who consume artificial sweeteners, particularly in diet sodas, actually end up gaining more weight. “They think they’ve bought themselves some breathing room by drinking a diet soda instead of a regular soda, but then they eat more,” Field says.

I found the tiny, circular Splenda logo next to the drink’s name on the Jamba Light menu board difficult to see from the register. But general manager Shamoon thinks customers know about the Splenda content. She says, “The people who get them are customers who have always been getting the Jamba Lights, and it’s always said Splenda.”

I think I’ll decline to join the ranks of the dyed-in-the-wool Splenda drinkers and stick to my homemade concoctions instead.