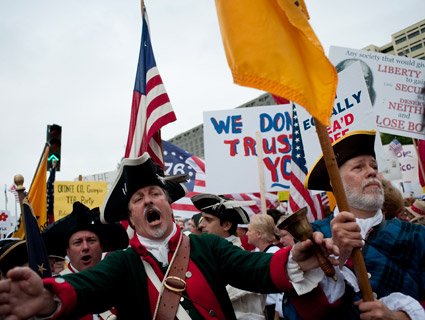 The finances of the nation’s largest tea party group have increasingly become a subject of concern—and outrage—to conservative activists. Some question whether donations to the organization, Tea Party Patriots, have gone to advance the movement, or just the careers and jet-setting lifestyles of its leaders. What they don’t know is that the group has had a man with an unusual background managing its money: He was sanctioned by the IRS several years ago for failing to pay hundreds of thousands of dollars in payroll taxes related to a failed business that pushed him into bankruptcy. He also happens to be married to one of the group’s leaders.

For a group that has demanded financial accountability and transparency from the Obama administration, Tea Party Patriots (TPP) has not embraced those principles in its own business affairs. It has been highly secretive about its finances, and the organization’s leaders have dealt harshly with activists and employees who’ve pressed for answers on how donor money has been spent.

Meanwhile, the group has failed to file a timely tax return indicating how much money it has raised and what, generally, it spent it on—including how much it’s paying its top staffers. And despite identifying itself for nearly two years as a tax-exempt nonprofit organization, the group has neglected to actually apply to the IRS for such status.

Former TPP insiders say the organization’s finances have largely been managed by Lee Martin, who’s identified in some corporate filings as the group’s assistant treasurer. He’s better known to tea partiers as the husband of Jenny Beth Martin, a cofounder of TPP and one of the faces of the tea party movement.

Unknown to all but a few tea partiers who have knowledge of TPP’s internal dynamics, Martin has taken a wide-ranging role in the organization, managing a range of payroll and personnel issues. Former employees describe him as a financial gatekeeper of sorts. “I couldn’t get paid without contacting Lee Martin,” says Scott Boston, who worked for several months as the group’s national education coordinator before he was let go last fall.

Ex-TPP insiders familiar with Martin’s role at TPP say having him handle the group’s bills poses a conflict of interest. They also question the wisdom of placing a person with a dubious financial track record in charge of managing the group’s donated money—which, since the group’s founding in 2009, has totaled in the millions. Much of it arrives via small online contributions that can create a bookkeeping nightmare.

“I couldn’t get paid without contacting Lee Martin.”

While Lee Martin does have experience running a business, things did not end well for his company. For about eight years, Martin owned a Georgia temp company called Indwell, which supplied non-English speaking temporary workers to local businesses. The company went belly up in 2007, and Martin has blamed a former business partner for contributing to its demise. But while running the company on his own, Martin failed to pay hundreds of thousands of dollars in payroll taxes.

By 2008, the company’s collapse had forced the Martins to file for bankruptcy. At the time, they were more than $1.4 million in debt. Of that, they owed $510,000 to the IRS and more than $172,000 to Georgia’s tax authorities. The Martins eventually lost their home and twin Lincoln Navigators. Before the tea party movement came along in early 2009, Jenny Beth was working as a maid and Lee was fixing computers to make ends meet.

“I think it’s a huge conflict of interest to be handling all that money when you’re in such dire straits.”

While Jenny Beth took a high-profile role in promoting the tea party movement—Time named her one of the 100 most influential people in the world last year—Lee Martin worked behind the scenes for the organization his wife helped found. Martin admits that he has done a lot of “back office” and administrative work for TPP, but downplays his role within the organization. “I’m taking care of our 7-year-old twins while my wife runs around the country doing tea party stuff,” he says. He portrays himself as more paper push than treasurer, noting that he doesn’t sign any checks or make payments. He does confirm, however, that “if people want to get paid, the bill goes through me for administrative purposes.”

Lee Martin—who says he is not paid for his TPP work—doesn’t just handle money matters. He’s also taken on the role of a de facto human resources manager, as well. When TPP fired its chief technology officer, Rob Gaudet, in October, it was Martin who wrote to him offering a sizable payout to sign a nondisclosure agreement. “I can authorize $13,000 right away in exchange for an agreement that basically says we will part on good terms, support a smooth transition, and refrain from making negative comments about each other,” Martin wrote in an instant message. Eventually, TPP offered him $20,000, Gaudet says, but he declined to sign the agreement.

Why did Martin get involved in this matter? “I used to work in the human resources industry,” he explains. “My history in that gave me knowledge the group found useful.”

Some tea party insiders, however, see Martin’s work for the group as an indication that it’s relying on nepotism rather than good management to run its affairs. In part, that’s because Lee Martin isn’t the only relative of Jenny Beth who’s involved in running TPP. Her cousin, Kevin Mooneyhan, is a paid TPP employee.

Lee Martin says Mooneyhan, once the operations coordinator for his defunct temp firm, is his wife’s right-hand man, and insists there is nothing improper about his hiring. “It didn’t have anything to do with the fact that he was a cousin,” he says. “I think [Jenny Beth] has about 30 cousins, he’s the only one [working there], and it’s strictly because of his qualifications and not because he’s a relative.”

Martin blames criticisms of him and TPP’s leadership on disgruntled employees and activists. “We’ve got a few people who along the way just did not work out as team members,” he says. “They’re not happy about having to be separated from the group.” This sentiment is shared by some TPP loyalists. “Those speaking out against them, they are just sour grapes,” says Anthony Shreeve, a Tennessee state coordinator for TPP.

But Laura Boatright, a onetime TPP regional coordinator in southern California, says activists have good reason for concern about Lee Martin’s role in the group. She points in particular to the Martins’ fragile financial condition. “I think they should be worried, not only because of his prior record dealing with finances and having a very successful business that went under, but I think it’s a huge conflict of interest to be handling all that money when you’re in such dire straits.”