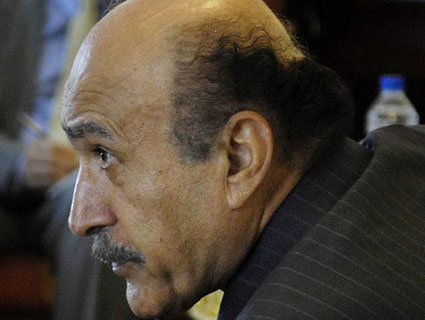 Omar Suleiman, the recently appointed Vice President of Egypt, may soon become the most powerful man in that country. Hosni Mubarak, who has ruled Egypt for 30 years, appeared set to step down on Thursday night. (He didn’t, but he still could. UPDATE: Friday, 11:15 a.m. EST: Suleiman just appeared on Egyptian television to announce Mubarak had stepped down. Power will be vested in a supreme military council; it’s unclear who will actually be in charge.) Weeks of protests, riots, and violence have shaken the Mubarak regime’s grip on power. There’s no guarantee that the end of Mubarak’s reign would mean democracy or even civilian rule for the largest Arab country. Opposition leader (and Nobel laureate) Mohamed ElBaradei has said, “there is no credibility in either Mubarak or Suleiman or anybody who is associated with that regime.” But soon, Suleiman could be running the show, no matter what ElBaradei thinks. So who is this guy?

He’s a spy: Prior to becoming Mubarak’s official No. 2, Suleiman, was for nearly two decades, the head of Egypt’s intelligence service, the famed (and feared) Egyptian General Intelligence Directorate (EGID).

He’s a torturer: As the New Yorker‘s Jane Mayer noted in her book The Dark Side (read it!), Suleiman managed the Egyptian end of Clinton- and Bush-era “extraordinary renditions,” in which people whom the US suspected of torture were flown to Egypt (“rendered”) and tortured. (Stephen Grey’s Ghost Plane and Ron Suskind’s The One Percent Doctrine also feature material on Suleiman’s role in torture.) As noted in Mother Jones‘ Egypt explainer, Mayer quoted Edward Walker, the former US ambassador to Egypt, who described Suleiman as “not squeamish.” MoJo’s Jim Ridgeway has more on Suleiman’s role in torture.

He’s a close ally of the US: Because of his work on rendition and other intelligence-related cooperation, Suleiman may have an even better relationship with American officials than Mubarak did. “Suave, sophisticated, and fluent in English, he has served for years as the main conduit between the United States and Mubarak,” Mayer wrote last month. A 2006 State Department cable released by WikiLeaks notes, “our intelligence collaboration with Omar Soliman… is now probably the most successful element of the relationship” between the US and the government of Egypt.

This makes any succession that puts Suleiman in power a win for the intelligence community.

He was trained by communists: Paging Glenn Beck! Suleiman received his initial military training in Egypt, but he finished up at Moscow’s Frunze Military Academy—in what was then the Soviet Union.

He’s the Muslim Brotherhood’s worst nightmare: Suleiman’s intelligence forces don’t just interrogate people who are rendered to them by the US. They also go after internal dissidents—especially Islamists. Reuters says he was “the mastermind behind the fragmentation of Islamist groups who led the uprising against the state in the 1990s.”

He helped get the phony “intelligence” that led to the Iraq war: One of the renditions Suleiman reportedly handled was that of Ibn Shaikh al-Libi. I wrote about the case after reports emerged of al-Libi’s mysterious death, which was ruled a suicide, in a Libyan jail in May 2009:

Al-Libi was the man whose false confession, obtained under torture, of a link between Saddam Hussein and Al Qaeda provided the Bush administration with its casus belli for war with Iraq. It didn’t seem to matter that al-Libi’s claim that Bin Laden had sent operatives to be trained in the use of weapons of mass destruction by Hussein’s people didn’t make any sense. “They were killing me,” al-Libi later told the FBI about his torturers. “I had to tell them something.” [Michael Isikoff and Mother Jones‘ own David Corn were the first to report on these comments, which they revealed in their 2007 book Hubris.] A bipartisan Senate Intelligence committee report would later conclude that al-Libi lied about the link “to avoid torture.”

Secretary of State Colin Powell cited al-Libi’s confession when he argued the case for the Iraq war to the United Nations in February 2003.

He may have been connected to the death of torture subject Ibn Shaikh al-Libi, one expert believes: Terrorism consultant Evan Kohlmann has said that “Al-Libi’s death coincided with the first visit by Egypt’s spymaster Omar Suleiman to Tripoli.” Al Jazeera’s Lisa Hajjar explains:

Kohlmann surmises and opines that, after al-Libi recounted his story about about an al-Qaeda–Saddam-WMD connection, “The Egyptians were embarassed by this admission—and the Bush government found itself in hot water internationally. Then, in May 2009, Omar Suleiman saw an opportunity to get even with al-Libi and travelled to Tripoli. By the time Omar Suleiman’s plane left Tripoli, Ibn al-Sheikh al-Libi had committed ‘suicide’.”