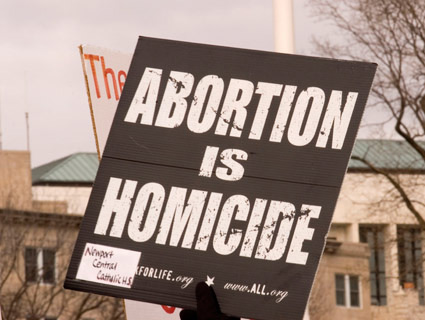 Mila Means, the Wichita doctor who wants to fill the void left by the 2009 murder of abortion doctor George Tiller, has been forced to search for a new place to work. Last month, Means’ landlord requested and received a restraining order forbidding the doctor from providing abortion services in the building where her office is currently located. On Friday, Means told the state judge handling the case that she is hoping to secure a new location for her practice, and reached an agreement with her landlord not to provide the service at the current location.

Means has actually been looking for a new office for several months, her office manager, Andrea Hamel, tells Mother Jones. The doctor and her staff had long worried about security and the possibility that their current landlord might prove unhospitable. The threat of controversy has kept new landlords from accepting them—and the publicity brought by the restraining order hasn’t helped matters, Hamel says. “We have looked at multiple buildings, but once people find out what we’re going to be doing in the future, they don’t want to be involved in it,” said Hamel.

A second doctor, Greg Linhardt, had also been in training to provide services at his office. But the clinic that was training both Linhardt and Means, Aid for Women in Kansas City, confirmed to Mother Jones on Tuesday that Linhardt has stopped his training after the attention that it had drawn from anti-abortion groups. These latest developments have abortion foes in Wichita celebrating a “victory” in their work to “keep Wichita abortion-free.”

There has not been a doctor offering abortion services in Wichita since an anti-abortion activist murdered provider George Tiller in May 2009 while the doctor was serving as an usher at his church. Means has been training to replace him, but opponents of abortion rights are committed to preventing that from happening. The national anti-abortion group Operation Rescue, which is headquartered in the city, is one of several groups that have held protests outside Means’ office, and has posted her name, photo, and address online in an effort to draw out more abortion foes against her.

“Operation Rescue worked behind the scenes to insure that Greg Linhardt and Mila Means dropped plans to bring abortions back to Wichita, one of the largest abortion-free cities in the United States,” the group’s president, Troy Newman, bragged in a press release on Tuesday.

Means’ staff is hopeful they will find an alternative location. “Hopefully, we will find something,” Hamel says. “It’s just a matter of finding the best location for us.”