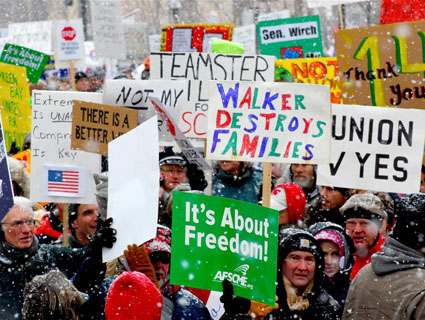 “One more night!” was the chant in Wisconsin state capitol rotunda on Sunday night as a thousand or so protesters defied a government order to pack up and go home. For hours they chanted, right through the 4 p.m. deadline, and the police simply stood and watched. “We did it,” one protester near me shouted into his cell phone as the crowd erupted. “We kept this thing open.”

But what happens next? While the demonstrators succeeded in securing another night in the capitol, there’s no mistaking the feeling that Saturday’s 100,000-strong rally was the high water mark, and that nothing going forward can match that kind of outpouring. After all, the students and teachers and workers who have walked out of their classrooms and jobs can’t do so forever. They have families to feed, bills to pay, classes to pass.

So how do organizers—including the national unions, several of which are digging in for the long term, renting Madison office space and hiring staffers—plan to maintain their momentum? The most obvious strategy is putting more pressure on the three or four Republicans in the state Senate who might be wavering about Republican Governor Scott Walker’s controversial budget repair bill. Then there are the 14 state Senate Democrats who fled the state on February 18 to prevent the state senate from voting on Walker’s budget bill; one called it a “filibuster on feet.” If even one returns to work, Republicans will have a quorum and the bill can pass. Plenty of ideas have been floated to keep those senators busy, including taking them on a national tour to raise money and drum up support for their cause. But for now they’re simply biding their time in Illinois, doing the occasional TV appearance and closely watching the events back home.

There’s also talk of a organizing a general strike should the Wisconsin legislature find a way to pass Walker’s bill. A week ago, the South Central Federation of Labor, a Madison-based umbrella group representing 97 labor unions with 45,000 members, endorsed the idea of a strike if Walker’s bill passes, even though the SCFL doesn’t have the authority to demand a strike itself. “Some unions have talked about this could result in a strike, so we wanted to make sure that we were upfront that we’re on board with that,” SCFL president Jim Cavanaugh told a local TV station.

There’s also a legal element to the fight. Walker’s infamous call with “David Koch,” a.k.a Buffalo Beast editor Ian Murphy, sparked at least one call for an investigation, by the Public Campaign Action Fund, for possibly violation of Wisconsin ethics laws. Former Wisconsin attorney general Peg Lautenschlager, a Democrat, told the local Capital Times that she believes the state’s Government Accountability Board should review the call because “there clearly are potential ethics violations, and there are potential election law violations and there are a lot of what look to me like labor law violations.” The watchdog group Citizens for Responsibility and Ethics in Washington, has also asked the Accountability Board to investigate Walker’s use of the State Patrol to track down the Senate Democrats in hiding in Illinois.

A big unknown in the next week is Walker’s announcement of his 2011-2013 budget, scheduled for Tuesday. The governor is expected to call for massive cuts to state spending, including slashing $1 billion from funding for schools and local governments. Will the budget announcement add momentum to the protesters’ fight or distract from it? No one will know until later this week.

No matter what happens, labor and progressive leaders say they’ve been awed by the way the issue has resonated. With an estimated 100,000 in attendance on Saturday and nearly 70,000 more the Saturday before, there hasn’t been a labor-related outpouring of this magnitude in 40 years, says Robert Kraig with Citizens Action of Wisconsin. “It’s already a national and international issue,” Kraig says. “And as long as we’re winning in public opinion, we should keep this impasse going.”