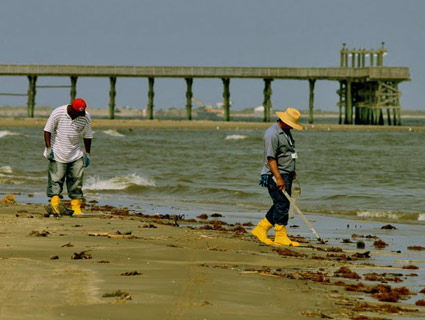 Lots has changed on Elmer’s Island. Nearly a year after the great oilpocalypse of 2010, this Louisiana wildlife refuge about 100 miles south of New Orleans isn’t crawling with teams of cleanup workers raking big black pools of crude off the sand; there’s no cleanup machinery or equipment; the only immediately visible remnants of the BP/Deepwater Horizon spill are the occasional tarballs, big as a kid’s head, that wash onto the shore.

Not that I can just waltz onto this public beach to see all that—not everything has changed. Like some lame iteration of Groundhog Day, the hundredth time I try to pull onto the Elmer’s Island access road from Highway 1 in southern Louisiana—some 200 days after the last time I tried it—I am, once again, stopped. Last year, it was cops blocking the road. Now it’s private security hired by BP.

“You have to get permission from central command to come on here, and then you’ll probably have to be escorted by an official,” the security guard tells me.

“How hard is it to get permission?”

“Usually pretty hard.” She says a local reporter couldn’t get through recently.

At Grand Isle State Park, about 10 miles down the 1, it’s the same story. My friend and I run into a two-man camera crew from Deutsche Welle, Germany’s international broadcast network, who’ve been denied access to the beach. The producer asks if he can turn the camera on me.

“A year after the spill, is BP being more cooperative with the press?” he asks me.

“Apparently not!” I say, though he already knows the answer; he’s just told me he calls and calls and calls, and BP refuses over and over to answer his questions about anything. 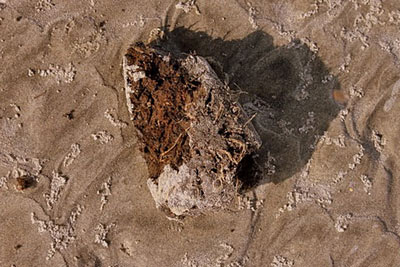 A tarball on Grand Isle beachAt the entrance to Grand Isle State Park, we’re issued the same warning DW was, that the beach is closed to the press and everyone else because there are workers on it. That doesn’t seem like that good of a reason to keep a reporter off a beach, and in any case it is a lie. Last August, when I walked out of sight of the park staffer at the entrance and onto the beach, two private guards escorted me away. This time, the beach is deserted of rent-a-cops and cleanup workers alike. It’s covered in tarballs, little and sometimes not-so-little brown blemishes all over the sand. They’re shiny and smell like gas when you break them open.

After a while, some workers arrive. Five of them. One shows me how they get the tarballs. He’s holding a broken-off rake handle; he’s taped a lens from a pair of sunglasses to the end of it, which he uses to scoop up the tar. He was originally issued a shovel, but the workers, finding this wildly inefficient, now 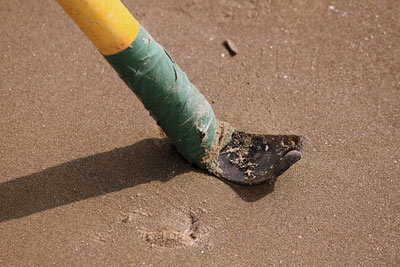 Homemade beach cleanup toolmake their own tools. In his other hand he’s got a rake with too much space between the tines to pick up smaller pieces of tar. He affixed mesh to the inside of it. “I’ve had this job since May,” he says. There’s a laminated “Ten Ways To Be A Successful Husband” card in the pocket of his denim shirt. “We’re just grateful for the work.”

Asked if any of this oil is from the new, non-BP spill that started washing up on Grand Isle last week, he says no, that’s already all been cleaned up, anything that’s left over is still Deepwater Horizon oil. A group of Coast Guard guys I ran into earlier said the same thing. BP spokesperson Blake Scott also confirms this after I make it through security at central command.

“Well, what do you want to do there?”

After many assurances that I will do nothing of any consequence on the island and that I have no intention of leaving his trailer office, Scott gives the go-ahead. As long as I stay away from the cleanup workers. For safety.

But there aren’t any anyway this late in the day. Even at peak hours there are only 15 on this 230-acre wildlife refuge. The security guard tailing us is the only other person on the beach. The cleanup is basically done. There’s just the big tarballs, a couple of which my companion picks up. An hour later he claims that his hand is burning, which I remember happening when I plunged my fingers in the stuff last year. BP is about to pull out and turn Elmer’s back over to the state.

Most of Grand Isle beach has already been handed back over. There aren’t last summer’s ubiquitous “BEACH CLOSED” signs, or security guards or cops tearing around on ATVs kicking people off. April 1 is traditionally the start of big tourism ramp-up, and it remains to be seen whether this summer’s visitors will reach pre-spill levels. Steve Chevalier, the owner of the Tropical Motel, thinks the rotten economy and politicians selling the whole country off to China might be more likely to keep people away than the oil.

Right now, on the open beach, where there used to be a giant sand-washing machine, there are actual vacationers. A guy flies a shark kite. Kids in bathing suits splash around in the waves. Between the tarballs on Elmer’s to the west and the state park to the east, people are enjoying the beach, just like they were the day oil first made landfall here.