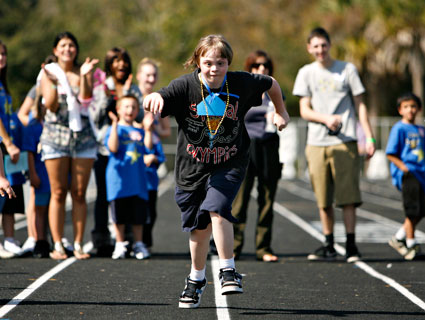 The House GOP’s budget, which passed last month, takes a hatchet to programs for disabled kids and Special Olympics athletes. The proposed cuts could force the closure of at least one Special Olympics program, which is funded through the Department of Education. Dubbed Project UNIFY, the program serves more than 750,000 students in 43 states and draws from techniques used in Special Olympics training for activities in public schools.

The program includes sports teams that pair disabled athletes with nondisabled athletes; developmental activities for young children with disabilities; and anti-discrimination programs to combat bullying in schools. Special Olympics president and CEO Tim Shriver has said the program is at the forefront of a national movement to fight bias against the disabled and, in a recent interview on MSNBC, he denounced the GOP cuts: “It wasn’t a haircut—it was a guillotine job for the programs for health and education for children with special needs.”

The cuts would slash $8.1 million from the UNITY program. While the amount may seem nominal, it would deal a fatal blow to the nascent program, which began in 2008 under the Bush administration. “It would go away—there would be no alternative,” says Dr. Stephen Corbin, senior vice president for community impact at Special Olympics International, the nonprofit organization that runs the athletic event for the disabled.

Corbin emphasizes that the Special Olympics has provided critical life skills to participants through the school-based program. Though only 10 percent of young adults with intellectual disabilities are employed, 52 percent of Special Olympics athletes have jobs. “It gives them much greater potential to take care of themselves as young adults and become contributing members of community, rather than become dependents, so to speak,” Corbin says.

The Special Olympics has launched its own advocacy effort to defend the UNITY program and other efforts jeopardized by the cuts, bringing athletes from the Games to Capitol Hill this week. Blasting the House bill for “threat[ening] the life of critical Special Olympics programs,” the organization also launched a Congressional lobbying drive among disability advocates to ward off the cuts.

Along with its Department of Education money, funding the group receives from the Centers for Disease Control is also at risk. The CDC funding is directed at a program that provides more than a million free health screenings for disabled athletes, who often have trouble getting appropriate medical care. “A person with intellectual disabilities might have to go to 50 physicians,” says Corbin. “A lot of health professionals don’t want these patients in their waiting rooms, fearing that it would make other patients uncomfortable. Our population is one of the neediest populations around.”

Using the federal money to kick off the program, the Special Olympics receives donated medical care and supplies to treat Special Olympics athletes—saving money for patients that could be extremely expensive to treat otherwise. Though the program hasn’t been singled out for elimination, Corbin warns that it, too, could be a casualty of the budget battle: “Without that seed funding, our program would dry up.” And the spending reductions to the Special Olympics come on top of over $550 million in cuts to special education that are also in the House GOP budget.

It isn’t the first time that legislators have taken aim at the Special Olympics in the name of fiscal austerity. While she served as Alaska’s governor, Sarah Palin attempted to halve funding for the state’s branch of the Special Olympics. (The proposal didn’t pass muster, and the final budget actually included a slight increase in funding.) Other states facing budget crunches are now following suit: North Carolina’s Democratic governor, Bev Purdue, cut off all funding to the nonprofit in the budget she submitted last month.

In the current budget battle, funding for the Special Olympics—and other programs focused on the most vulnerable Americans—have received little attention. That could make it all the easier for such cuts to slip past the Democrats, prompting advocates to plead with legislators to preserve what little funding they receive. “These are small numbers in the larger scheme of things,” Shriver told MSNBC. “But they are big numbers when it comes to American values.”