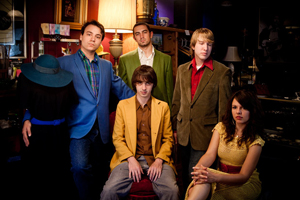 On Monday, we told you the story of Amede Ardoin, the king of Cajun Zydeco music, who faded from public view in the 1930s after a severe beating at the hands of two white men. Ardoin’s legacy lives on in the music of a new generation of young Cajun bands like the Pine Leaf Boys and Feufollet, a Grammy-nominated group from Lafayette, Louisiana. Performing entirely in French, Feufollet blends traditional Cajun music (think fiddles and accordions) with rock-and-roll influences; it’s not your father’s zydeco, in other words. I spoke with Feufollet’s lead singer, Anna Laura Edmiston, about the Cajun dialect, mysterious swamp gases, and what it’s like to write songs no one can understand.

Mother Jones: What’s the latest song, good or bad, that super-glued itself in your brain?

Anna Laura Edmiston: “I was a landscape in your dream,” by Of Montreal. Well, their version of it.

MJ: Three records that you never get sick of listening to?

ALE: Graceland by Paul Simon; Traveling Wilburys’ Vol. 1; and Sunshine on Leith, by the Proclaimers.

MJ: If you could bring anyone back from the dead—or borrow them from a living band—for a big jam session, who would it be?

ALE: Oh my gosh. George Harrison. I think he’s great. I love his music, and I know everyone else in the band does. Who doesn’t like The Beatles? George has just always been my favorite, just because of his creative outlook on things and where he would take material. Plus, I just love his energy and his Zen-ness.

MJ: Anything you listen to but don’t exactly like to publicize the fact?

ALE: I guess I like hip-hop. That’s like the weirdest thing I listen to, compared to everything else.

MJ: Are there any Cajun rap groups?

ALE: Not that I know of. I know there’s probably some Acadian rap groups in eastern Canada.

MJ: I was down in Lafayette over the summer, and the older people I spoke to kind of lamented the fact that the younger generation doesn’t really know the language. What do the older generations—the people who sit on their front porch—make of you guys?

ALE: What we do is completely different, really, from what is considered traditional Cajun music. It’s pretty out there, because there’s five of us coming together that create this music and we all have different musical influences. So I would imagine that our grandparents’ generation, if they were to sit down and listen to our latest album, for example, probably wouldn’t even have a clue that it’s Cajun music.

MJ: Have you had any Dylan-at-Newport moment because your sound is so different?

ALE: So far, the music’s been pretty well received. I mean, for the most part it’s danceable. If you can keep a beat, and you like to dance, you can dance to anything.

MJ: Did you grow up speaking Cajun French?

ALE: Not Cajun French. My mom is from Montreal, so my accent’s a lot more French Canadian.

MJ: Did that take some getting used to?

ALE: As far as speaking it, I never really made any transition. I pretty much speak straight-up Canadian French. But I also grew up around Cajun French, so I understand it perfectly well, and I even naturally use some expressions. I’ve had one in my ear my whole life and I’ve spoken the other my whole life, so it just all ends up being the same thing for me.

MJ: Does your audience always know what you’re saying?

ALE: No. Hardly ever, really.

MJ: So what’s that like? You’re singing and you’ve spent hours writing the lyrics, and people don’t understand you!

ALE: [Laughs.] It certainly takes an effort to make the songs relevant before we perform them. And if we’re playing for a venue where the people are sitting down and are really paying attention and wanting to soak it all up as much as possible, we pretty much will tell a story behind the song, translate some of the lyrics, and of course the song titles. It just has kind of a world-music-group feel. I mean, there’s plenty of people that go and watch groups singing in all sorts of different languages and they still appreciate the music and the vibe and the energy of it.

MJ: What’s the music scene like down in Lafayette?

ALE: There’s a lot of musical intermingling. Everybody knows each other, especially in the music community and the arts community and the French-speaking community. Lafayette’s a really culturally evolving community. We get a chance to collaborate with so many different musicians and so many different bands just because everyone knows everyone and everyone respects what everyone’s doing. So there’s rock bands, indie rock bands, swing bands down here, that are all a part of the Cajun music scene.

MJ: I caught an interview you guys did with NPR a few years back and you mention that the band started over the phone.

MJ: How does that work?

ALE: It was [fiddler/accordionist] Chris Stafford and [fiddler] Chris Segura. They were really young at the time, and Chris Segura lived in a town called Berwick which is I guess an hour and a half south of Lafayette. And their moms knew each other and knew that the other son was a musician, so they got in touch by phone and they just started talking about the possibility of forming a band together, so they put the phones on speaker, and Chris Stafford played accordion and Chris Segura played fiddle, and they’re just kinda like, “Okay, yeah, sounds like it could work! Lets do this!”

MJ: So how old were they?

MJ: Just throwing it out there. When did you get involved?

ALE: I joined when I was in high school. I was 16 years old. So that was in 2003, and at the time the two girls that were playing guitar, and the other one that was singing, had moved on. So the guys decided they wanted to keep this going, so just maybe audition a few more female singers. And they felt that a female vocalist was sort of part of what defined the Feufollet sound.

MJ: What’s the story behind the name?

ALE: Feufollet is a term that comes from old folklore, that can be traced back to French Canada and even France. And it comes from an actual natural phenomenon that happens, like a swamp gas. And back in the day, they’d see these kind of little balls of smoke that would ignite, even, and at night they especially looked like little ghosts. And they would call them the “Feufollet,” the dancing fire. And there’s all sorts of different stories behind them: Feufollet could be a light that’ll guide you home. Some stories say Feufollet were the souls of unbaptized children.

MJ: That’s kind of morbid. So, do you feel any pressure knowing that you’re, like, keepers of the flame of Cajun culture?

ALE: I think realistically we’re musicians first and foremost; that’s what we love to do. It just so happens that it’s traditional Cajun music. That’s sort of our foundation; it’s part of us, and where we were born and where we were brought up. The fact that we’re doing what we love to do but at the same time we’re able to preserve and honor our culture—it’s sort of have your cake and eat it too, you know?

MJ: You had a new album out last spring. What are you working on now?

ALE: An EP, actually, with a local rock band. They’re sort of like, a ’60s, ’70s psychedelic rock band from Lafayette. We’re doing a music exchange, and we’re recording three of their songs, in English, and they’re recording three of ours, from our latest album. So all six of them are going to be original songs from those bands. So we’re taking those three songs and arranging them in our style in the way that we would approach them, and they’re doing the same with our songs.

MJ: How much connection do you have with Acadian groups—is there any overlap with the different kinds of music?

ALE: The two populations of musicians don’t get to spend a whole lot of time together, so I don’t know how much the genres are influenced by each other, but there’s definitely a close connection between us and a lot of musicians in eastern Canada. We like to have them come down here and see what’s going on, and we love to go up there and see what they’re up to, and share what we’ve been doing, because we are descendants of that area and there’s an ongoing curiosity about each other.