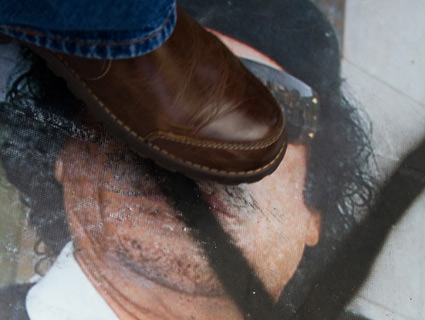 As Muammar Qaddafi’s violent backlash against protestors has intensified, the US has swiftly taken action to punish his brutal response to Libya’s popular uprising. Earlier this week, President Obama announced that he would pursue harsh, unilateral sanctions against the Libyan government in an effort to choke off its funds and resources. Qaddafi’s regime has drawn nearly universal condemnation, and the move has drawn rare bipartisan support in Congress. But one Washington lobbying group—which represents some of the nation’s biggest oil companies—has opposed the Obama administration’s strategy.

USA*Engage—a business coalition whose members include Halliburton and, reportedly, ExxonMobil, BP, ConocoPhillips, and Shell—criticized unilateral sanctions as a “failed strategy” when Sen. John Kerry (D-Mass.) began pushing this approach last month. Instead, the group argues, the US should only pursue a multilateral strategy, working through the United Nations. USA*Engage insists that “a go-it-alone approach” simply isn’t an effective plan. “When you act unilaterally, the odds of success are much lower—too many people out there are not on board,” Bill Reinsch, the group’s co-chair, told Mother Jones. “The goods and services being withheld from the target country by the US are readily available from other sources.”

But critics say USA*Engage has a history of opposing unilateral sanctions in order to make it easier for US companies to operate in rogue regimes. Given the lack of international consensus, simply waiting for a strong multilateral response is often unrealistic, they charge. And even when the international community does take action—as the UN Security Council moved to do this week, with American support—it tends to be weaker than the punishment countries like the US dole out.

“USA*Engage has always said they’re against unilateral sanctions,” noted Arvind Ganesan, director of Human Rights Watch’s business and human rights program. “They think it disadvantages US companies to their detriment. To call for multilateral sanctions is to call for no effective sanctions at all.”

Established in 1997 by the National Foreign Trade Council (NFTC), the country’s oldest free-trade lobbying group, USA*Engage was among the organizations that pushed to lift US sanctions in Libya in 2004 as European countries began to do business in the country. The group similarly lobbied to open up Burma, Nigeria, and other repressive regimes to American companies. USA*Engage’s powerful, deep-pocked members have actively supported its work: as CEO of Halliburton, Dick Cheney helped the group lobby against sanctions on Libya, Iran, Syria, and Pakistan, criticizing the US as “sanctions-happy.”

“I think it would be better for the story never to come out.”

USA*Engage frequently cites a host of reasons—political, humanitarian—for supporting diplomatic solutions over punitive ones, but the group’s bottom line is to support business interests. “The sole result of US sanctions will be to multiply opportunities for foreign companies in Libya,” Reinsch, a former Clinton administration official, said in 2003. Echoing the arguments of US lobbyists for Qaddafi, USA*Engage maintained that Libya, having surrendered its WMDs, was no longer a pariah state even if it remained an autocratic one.

When it comes to oil in particular, USA*Engage says that operating in dictatorial regimes is simply a necessity—one that calls for realpolitik. “The reality is that the oil in all the nice countries has been exploited already, we can’t drill anymore in Norway,” Reinsch said. “I don’t detect any abiding affection for the Libyan government. In the [oil] business, you don’t have any choices.”

He acknowledged, however, that the situation in Libya has deteriorated rapidly, calling the violence that Qaddafi has used against his own people “profoundly depressing.” In a press release, his group condemned “the violence and grave human rights violations occurring in Libya…at the hands of the Qadhafi regime.”

Even so, USA*Engage has still made a point of trying to dissuade the White House from taking unilateral action against Libya. (When the US last imposed harsh sanctions against the country in the 1980s, they took decades to repeal.) Since the uprising began, USA*Engage has issued press releases to this effect and has met regularly with the Obama Administration. According to Reinsch, representatives of USA*Engage recently met with administration officials to lobby them on sanctions policy, as well as discuss the evacuation of American employees of its member groups in the Libya.

When it comes to the US response in Libya, USA*Engage has treaded a careful line, avoiding criticizing the Obama administration outright. Asked whether USA*Engage disagreed with Obama’s decision to pursue unilateral action in Libya, Reinsch referred Mother Jones to the group’s press releases: “We’re not saying anything further.”

Though it hasn’t hesitated from speaking out on Libya, the group has also made an effort to shield its powerful members from criticism. It does not publically disclose its membership, and Reinsch refused to confirm whether oil companies that have been reported to belong to USA*Engage are current members. Mother Jones contacted a half-dozen US oil companies that have operated in Libya and reportedly belong to the coalition—including ExxonMobil and ConocoPhillips, which were both active in the group during the Bush administration.

Only Halliburton confirmed that it is a current member, but declined to provide further comment on the issue of sanctions. John McLemore, a public affairs officer for ConocoPhillips, said he’s unsure whether the company is a USA*Engage member but added that the oil giant “is complying with and will comply with US Sanctions.” (Marathon, another US oil company operating in Libya, said it is not a USA*Engage member and that “any discussions related to sanctions on Libya are better left to policy makers.”)

American oil companies are sensitive about discussing their role in operating in Qaddafi’s Libya. In the interest of protecting its members, USA*Engage, too, is cagey about having a spotlight on its activities. Reinsch, for his part, only spoke to Mother Jones reluctantly, saying, at one point, “I think it would be better for the story never to come out.”