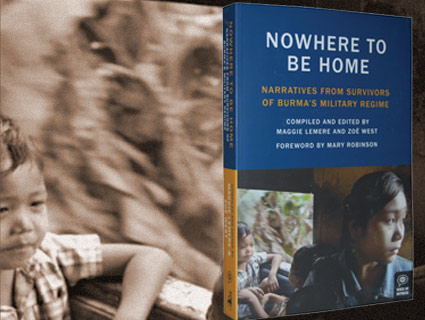 It’s Burma’s turn for an earthquake: This morning, the country was rocked by a 6.8 temblor, in addition to several strong aftershocks. No news yet on the extent of the damage, because it’s incredibly difficult to get information out of a country with such insane censorship and nonexistent infrastructure.

Speaking of Burma (and since I really like speaking of Burma anyhow), Voice of Witness, McSweeney‘s oral-history series, is about to release its newest book, Nowhere to Be Home: Narratives From Survivors of Burma’s Military Regime.

My favorite story so far is that of Nge Nge. When she was in her early 20s, the schoolteacher was raped (another subject I can’t stop bringing up); her attacker then forced her to marry him. Nobody believed her; when she told her dad, he beat her up and disowned her. Below is an excerpt from Nge Nge’s story, though it’s worth reading the whole 25-page thing, which has a relatively happy ending. Wait ’til you find out what her rapist husband does, how she finds a way to stick it to another dude, and the hope she discovers in the power of education.

One evening, I was walking back to my village from the school. It was a bit dark, and I didn’t see anyone else on the path. Then a man came up to me and asked me how to walk to my village. I had never seen him before. I told him, “This is the way to the village,” and then I kept walking. But he followed me as I walked on the path through the forest that went to my home. The path was narrow and meant for just one person, as there were bushes and trees on both sides. I almost always used this path, as did many other people.

Then the man suddenly grabbed my hands and tried to take off my clothes. My clothes ripped and I tried to escape from him, but he started punching me. First he punched me in the cheek, and then in the breast, and then in the belly. When he fought me like that, I couldn’t stop him and I couldn’t escape. You know how the situation can be—I was so scared of him. Then he raped me. We were on the path the entire time. Afterward, as I sat in the same place where he raped me, the man told me that he did not have a wife or children, and that he would marry me.

I was so afraid of him, but if I denied him, what would he do to me? So I kept silent and followed him. I was scared that he would do something else to me.

My clothes were torn apart and so I was very ashamed to return to my home like that. I was still quite far from home—when the incident happened, I still hadn’t gotten halfway to my village. The man looked at me and gave me his jacket to put over my body and told me again that he would marry me.

I was scared and I could not reply to anything the man said because he had punched me in the chest, all around my right ear, and in the stomach. I was so scared, and I didn’t dare resist him anymore at that point.

I didn’t have much confidence or experience in dealing with different people in my life, and I was too shy to say anything back to him. I had no courage to speak back to strangers. Moreover, because of the way my parents had always controlled me my entire life, I was scared of doing anything to fight back. When the man hurt me, I was just more afraid of him.

I was afraid to escape from him, but I was also afraid to face my parents. According to our tradition, sexual relations should only happen between a wife and a husband. I was so afraid of him, but if I denied him, what would he do to me? So I kept silent and followed him. I was scared that he would do something else to me. I would have been so ashamed to become pregnant and live my life without a husband, so I had to follow him. His name was Win Nyut.

Win Nyut took me to his sister’s house in Nyaunglaybin Township in Pegu Division. I stayed with him there for one week. During that week, I was both physically and emotionally hurt. He sexually assaulted me again and again—I couldn’t stand it.

I was so scared to sleep while next to him; I felt like I didn’t dare breathe or move. If I moved then he would wake up, and he would hurt my body again. He tried to get whatever he wanted from me. If I refused, then he would slap my face many times and hurt me. Because of his abuse, one morning I couldn’t even walk normally anymore.

I felt so terrible while that was happening to me that I wanted to commit suicide.

After that week, I went to inform my school why I had been absent for a week. I told them exactly what had happened to me—that a man had raped me and then said he would marry me. I said I was afraid to escape from him, so I had to follow him. But some people didn’t believe me because the man had already gone to the school and told them that I would take leave for a week. No matter what I said, they didn’t believe me. I reported the rape case to the Education Department and I also told my friends about what happened, but no one believed what I told them. I didn’t get any suggestions or advice about what to do. I felt like Win Nyut was the black ink stain that had destroyed all the bright colors in my life.

I went back to work after having disappeared for a week. Next, I went to tell my family. It was 8 p.m. when I arrived at the village. I told my parents exactly what had happened to me, but they did not believe me. My father hit me in the chest and back. My parents had planned for me to marry another man before and I had agreed, but they thought I was lying to them because I wanted to marry a different man. They said, “We have never had a situation like this in the history of our family.” My father said, “I’m ashamed. You are not our daughter anymore. You are already dead to us. Leave by yourself, or I will kill you.” They didn’t even let me stay one hour.

The next day, my father told their next-door neighbor that I had passed away in a car accident. He asked him to make a coffin. He said that I’d been disfigured by the accident, so my body should not be seen. My father put some of my things into the coffin, as well as any photos they had of me, and they cremated the coffin. They put a gravestone in the cemetery.

At the time, I really did want to die. I felt lonely, and I couldn’t contact my family anymore. But I was afraid to commit suicide because I had a lot of sympathy for my students—if I left, there would be no one to teach them. I also thought about how the people and the students’ parents in the village were very friendly to me and treated me well. I decided that I shouldn’t die because of this bad man. Indeed, he should have been the one to die because he was of no use to anyone. But if I died, the children would suffer. That’s why I chose to stay alive.