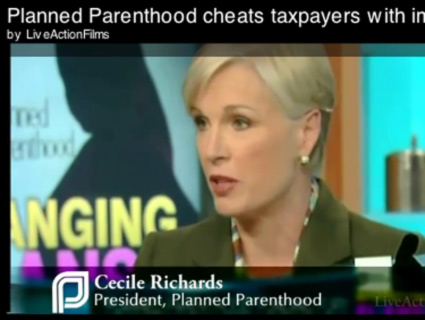 In February, Lila Rose, a 22-year-old anti-abortion activist, made headlines with a series of undercover videos that purportedly showed Planned Parenthood employees assisting pimps with getting abortions and contraception for their underage sex slaves. It came out that PP had reported Rose’s phony sex traffickers to the feds, but no matter. The hoax gave new fodder to the family-planning organization’s congressional opponents, and Rose still cites it as evidence that PP has “conceal[ed] statutory rape and help[ed] child sex traffickers.”

Yesterday, Rose, a protegé of video-sting provocateur James O’Keefe, released a new video that she claims catches the president of PP in a major lie. Here’s what she says she uncovered: In an appearance on the Joy Behar Show, PP president Cecile Richards lied when she said the following about a proposal to cut federal funding to her group:

If this bill ever becomes law, millions of women in this country are gonna lose their health care access–not to abortion services–to basic family planning, you know, mammograms.

That statement, Rose asserts, is “blatantly false” because PP does not offer mammograms. To prove this, her “investigative team” called 30 PP clinics across the country and couldn’t find one that provided breast cancer screenings. Based on those surreptitiously recorded calls, Rose concludes, “This is only the latest in Planned Parenthood’s abusive and deceptive activity.” Andrew Breitbart, who publishes posts by Rose on his Big Government site, has dubbed PP’s allegedly false claims a “mammosham.”

Yes, but… As we’ve learned time and time again, these stings usually prove too good to be true once you scratch their heavily polished surfaces. The video that Breitbart claimed showed Shirley Sherrod to be an unrepentant racist showed just the opposite. O’Keefe’s recent NPR takedown relied upon out-of-context quotes and sketchy video editing. Unsurprisingly, Rose’s new exposé rests on a pretty flimsy premise.

Live Action, Rose’s group, claims that PP “cheats taxpayers with imaginary mammograms.” That’s a pretty bold accusation, suggesting that PP is bilking the federal government. It’s not supported by any financial or documentary evidence but rather on that one brief clip of Cecile Richards. Rose’s interpretation of the clip holds up only if you overlook or ignore Richards’ use of the word “access.” In reality, PP does provide women with access to mammograms—not by doing them itself, but by making referrals. (Though, as reported by Media Matters—which has done yeoman’s work dismantling this and other stunts by Rose, O’Keefe, and Breitbart—some PP clinics have done mammograms.) While Richards’ statement may be fuzzy, you either have to be unaware of PP’s referral policy (which is described on its site) or make a special effort to deduce that Richards is trying to conceal a giant fraud—one so big that it should be the focus of an undercover operation that will spawn tons of outrage and gin up a controversy the mainstream media will feel obligated to cover.

As Rose herself concludes, “Sadly, such deception and manipulation should not surprise us.” Oh wait—I probably should have provided some more context for that quote.