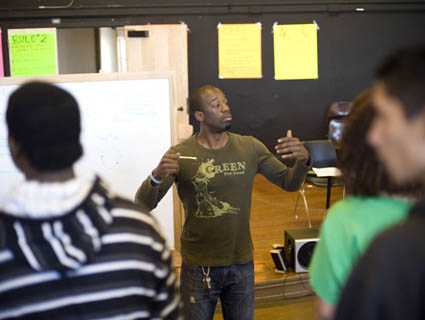 Should freshly pink-slipped Mission High School choir director Steven Hankle spend his off-hours prepping choir students for an upcoming concert in front of 2,500 people at Davies Symphony Hall? Or job-hunting? A new, young teacher, 29-year-old Hankle is among tens of thousands of teachers in California who’ll be grappling with similar questions after receiving preliminary lay-off notices today. Even though the state’s real budget numbers will only become clear after a special election in June—in which Governor Jerry Brown will ask voters to approve a temporary sales tax increase to save schools—California mandates today’s ritual of early notifications.

It’s the second time Hankle has received a pink slip at Mission High. Last year, Principal Eric Guthertz and the teachers union fought for months to reinstate him, and it worked. But it’s still just as demoralizing for a choir director trying to provide an anchor of stability for teens at risk, even though Guthertz told Hankle he’ll fight for him again this time around. “Choir is about building community,” Hankle explained to me over lunch last month, “and that takes time.” It takes even more time when most of your students come from struggling homes. One student I met in Hankle’s choir lives in a group home. Another lives with six other family members in one room. Hankle now has been working with the choir for two years, and he feels that the “momentum is building” for these kids and their small, safe choir community. Not to mention that a music program also makes the school more fun. Maybe that’s why in part school test scores are growing and the drop out rate at Mission High is declining. Most songs Hankle teaches are covers of popular hip hop and R&B tunes.

A few weeks ago I watched the choir perform “I Believe” in front of a packed school auditorium filled with parents. Rafael Ortiz, a single father who sat next to me, took time off work and brought three friends with him to watch his daughter Teresa perform. “She loves singing,” he told me, as he smiled and took pictures through the entire performance. A few weeks ago, Hankle’s choir got invited to perform at the Davis Symphony Hall on April 21.

Meanwhile each school—and each teacher who received a pink slip—has to prepare two budgets: “Plan A,” if voters say yes to a sales tax hike, and “Plan B,” if they say no. In previous elections, Americans have said that they like the generous services provided by government, but don’t want to pay higher taxes. So, district and teachers are preparing for the worst. That’s why the district sent out 274 pink slips to certified staff including teachers, nurses, and counselors.

California is also one of twelve states that require school districts to use seniority as essentially the main criteria when making teacher layoff decisions. Education reform advocates say the layoff rules need to change, delaying the first notices until state budget numbers solidify, and limiting seniority rules so schools with the newest teachers don’t get hit so hard. A recent study by the Education Trust says that the “last in, first out” approach disproportionately hits low-income schools like Mission High, because new teachers are usually placed in harder-to-staff struggling schools. The authors of the report call for a repeal of what they consider to be a dated, bureaucratic, and harmful state mandate. The recommend replacing it with a broader law that includes more local input from the school principal and staff, and including employee performance evaluations when making tough staffing decisions. The group recommends a system that uses multiple measures, not just test scores, although they argue that test scores should account for at least 50 percent of such an evaluation.

The California Teachers Association has planned protests across the state today against layoffs. The group also supports Brown’s budget to spare schools from further cuts, but only if—and this is a big if—voters approve the tax hike. Is the California Teachers Association also working on a new state system that will help local educators make better decisions about layoffs? A system that uses multiple measures in evaluating teachers, and goes beyond overly simplistic metrics of seniority or test scores only, could make a big difference for kids like the ones in Hankle’s choir.