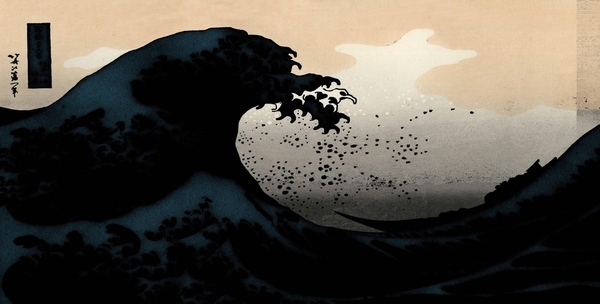 What do you think, does TEPCO merit the BP badge of dishonor, the Black Wave Award (okay, I just made that up): Where corporate greed, in a head-on with scientific and engineering reality, ignites environmental catastrophe?

Reports here and here and here suggest the problems with Japan’s nuclear power industry are entrenched and systemic. TEPCO, like BP, may simply be the weak link that broke first.

Japan was offered a preview of what was coming this week with the 2007 Ch?etsu Offshore Earthquake, a 6.8 temblor that caused serious and “unforeseen” problems at TEPCO’s Kashiwazaki-Kariwa Nuclear Power Plant, about 150 miles from the Fukushima plant, on Japan’s west coast:

[S]cientists used data from the magnitude 6.8 earthquake to conclude that the builders of the Kashiwazaki-Kariwa plant, the world’s largest by electrical output, may have unknowingly constructed it directly on top of an active seismic fault. “Not finding the fault was a miss on our part,” said Toshiaki Sakai, who heads the engineering group in charge of Tokyo Electric’s nuclear plants. “But it was not a fatal miss by any means.”

There has been a misconception since the early days of nuclear power that human error or mechanical failure, in other words risk factors within the plant itself, are the most significant variables regarding possible radiological release to the environment. In fact, the greatest threat to a plant´s operation may lie outside its walls [i.e., earthquakes]… A distinct new emphasis on external hazards in nuclear safety consideration followed the earthquake that hit [TEPCO’s] Kashiwazaki-Kariwa Nuclear Power Plant in July 2007, the largest to ever affect a nuclear facility.

Three reactors at the world’s largest nuclear plant, Kashiwazaki-Kariwa, shut down after a 6.8-magnitude earthquake. A fire briefly [broke] out in one of the units. Tepco initially [said] that the quake caused no radiation leaks, but days later [admitted] that 1200 litres of radioactive water had washed into the sea and several drums containing nuclear waste lost their lids after falling over. In the wake of the incident, experts debate whether Japan’s nuclear plants are engineered to standards high enough to cope with major quakes—the country’s Nuclear Safety Commission stipulates that all new plants must be built to withstand only a magnitude-6.5 event.

The current disaster, still unfolding, raises questions I discussed in earlier posts, including the fact that geologists didn’t think the fault offshore capable of a 9.0 quake.

And why did the hydrogen explosions happen at all? The Union of Concerned Scientists suggests that design flaws may have led to these explosions—possibly the same flaws unearthed during structural integrity tests on a reactor in North Carolina back in the 1970s.

To paraphrase my words in the BP Cover-Up: The nuclear power industry has been gambling for too long, under great pressure, at the border of controllable engineering, without the extreme safety equipment and protocols needed to stave off disaster.