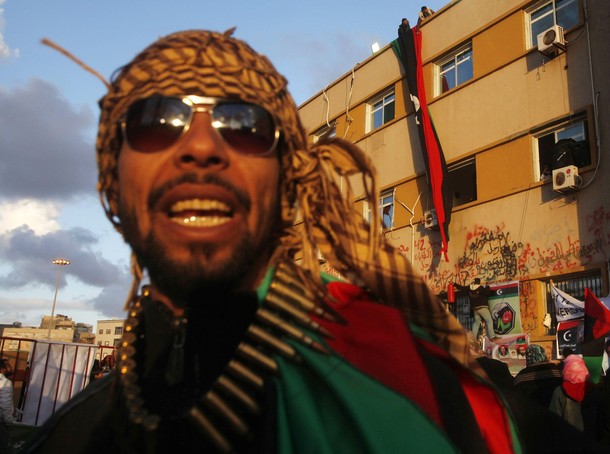 A rebel stands guard as another places a Kingdom of Libya flag at a state security building during a protest against Muammar Gaddafi in Benghazi, March 8.<a href="http://www.flickr.com/photos/brqnetwork/5510688612/">B.R.Q.</a>/Flickr Commons

Also see our explainer on what’s happening in Libya.

[UPDATED, 5:05 p.m. EST: Foreign Policy‘s Colum Lynch has a copy of the UN draft resolution against Libya, which imposes a no-fly-zone and other penalties on the Qaddafi regime. It’s expected to pass easily. Lynch also reportedly heard from an EU official that the UAE, Jordan, Qatar, and Saudi Arabia will participate in the anti-Qaddafi effort. Which raises some questions about duplicity among the Saudis, since they’re actively assisting the Bahraini royal family to violently put down that country’s rebellion.]

There’s no point in phrasing it diplomatically: Shit’s gotten real in Libya. This morning, leader-for-life Muammar Qaddafi, whose troops have pushed anti-government rebels back towards their eastern stronghold of Benghazi, took to the air to promise swift retribution. “We are coming tonight, and there won’t be any mercy,” he said:

They are finished, they are wiped out. From tomorrow you will only find our people. You all go out and cleanse the city of Benghazi…As I have said, we are determined. We will track them down, and search for them, alley by alley, road by road, the Libyan people all of them together will be crawling out. Massive waves of people will be crawling out to rescue the people of Benghazi, who are calling out for help, asking us to rescue them. We should come to their rescue.

On the basis of this threat (and Qaddafi’s recent, documented aggression), United Nations member countries are mobilizing. Tonight around 6 p.m. Eastern time, the UN Security Council is expected to vote on a resolution that would authorize airstrikes—and perhaps more—to halt Qaddafi’s eastward march against the Libyan resistance. According to the US Navy, two aircraft carriers and two Marine amphibious ships are underway or already within striking distance of the Libyan loyalists’ advance.

For weeks, the UN member countries—and the White House—have dithered about an appropriate response to Qaddafi’s use of violence against his own people. Talk of a no-fly zone, a half-measure that might accomplish little but require much, dragged on. The Obama administration—already overstretched occupying two Islamic nations, responding to the Japan crisis, combating a sluggish economy, and battling conservatives at home—has received criticism for its lack of a forceful response to Qaddafi. But there are good reasons to be skeptical of a military intervention: Can another heavy-handed regime change in the Arab world really be to America’s, and the world’s benefit? Will it work? Is it morally justified?

Though it comes very near to the anniversary of America’s war to oust Saddam Hussein, this is not Iraq. In one sense, it’s more like Rwanda: A humanitarian crisis is imminent in Eastern Libya. Rebels and their sympathizers are filling the streets of Benghazi in open defiance of Qaddafi’s threats. Should he move on the city as promised, the result will be a bloodbath. Whether US firepower can prevent it from happening is a question worth asking. But inaction will almost certainly result in democide of Libyan dissidents, along with many neutral citizens.

An intervention in Libya will have serious domestic political consequences, too. For one, expect the Republicans to either defer their budget-related “government shutdown” talk until after the crisis, or to bang that drum at their own peril. Some of their own prominent members, after all, are the loudest voices for intervention, so they should quickly fall in line to support Obama’s action—though they’ll likely also be quick to criticize its execution in coming days. The defense establishment, too, has a political stake in any action, since the services are jockeying to protect their budgets from the cutting block, and at this stage any intervention will likely privilege the Navy and Marine Corps, since they’re available sooner for air and ground operations.

There are, too, the international implications—first, the limits to which an intervention will go. Obama has already said that Qaddafi’s leadership in Libya is forfeit, and it’s hard to imagine a scenario that doesn’t end with his ouster, and the difficult work of restructuring a post-Muammar Libyan government. It’s difficult to say what that effort would look like or how long it would take or what role Western forces would play. But whatever the outcome, it will also have serious consequences for the other Arab nations where democratic protests persist, particularly Yemen and Bahrain. (Let’s not forget Iraq, either.) On the other hand, should a Libyan intervention turn out well, strategically and humanely—hardly a likelihood—it could be the sort of success that would restore Obama’s moral leadership at home and abroad, and even enable him to accelerate US disengagement from its less favorable, costlier occupations in Iraq and Afghanistan.

Those are all big speculations. The truth is, no one’s comfortably certain what a US-led Libyan campaign will lead to. But we can pretty much figure what Libya will look like, absent such a campaign. That scenario is reminiscent of an Ernest Hemingway quote: “I have seen much war in my lifetime and I hate it profoundly,” he said. “But there are things worse than war; and all of them come with defeat.”