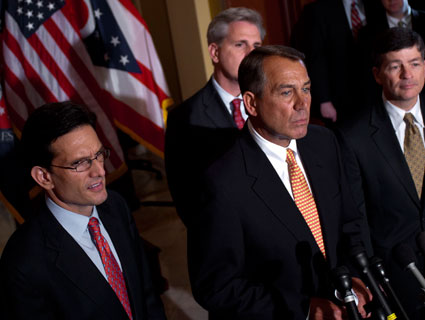 It was an odd day to put forth a radioactive, entitlement-slashing budget plan for 2012. With Republicans currently engaged in a high-profile showdown with Democrats and the White House over a budget to cover the remainder of 2011, they didn’t need to open another front in the budget battle. Nevertheless, on Tuesday Rep. Paul Ryan (R-Wis.), chair of the House budget committee, introduced a 2012 proposal that would privatize Medicare and slash Medicaid, among other major changes. Soon after Ryan rolled out his plan, signs of a divide emerged within the GOP over the wisdom of introducing it.

On a day when many House Republicans waxed poetic about Ryan’s agenda-setting boldness, the sentiment on the Senate side was notably more subdued. Sen. Scott Brown (R-Mass.), in particular, was critical of the House GOP’s timing. “I appreciate that [Ryan’s plan] takes debt and deficit and spending seriously,” he told reporters. “But let’s be real—we should be focused on funding the government. That’s the thing that’s happening in a couple of days, folks.” He added: “It’s great to talk about next year, but how about this week? How about getting the leadership together and focusing on funding the government?”

That’s certainly the line that Democrats—and other apostate Republicans—will use against the GOP if Congress can’t come to a budget consensus by Friday. When Ryan previewed his 2012 fiscal plan on Sunday, some observers concluded that the House GOP was hoping the far-reaching proposal would appease the right flank and give House Speaker John Boehner (R-Ohio) cover to come to a deal with Democrats. “The conventional wisdom is that this is about indicating that the [GOP] leadership has not gone Washington and is instead sticking to ideological purity, even if there is a compromise,” one Democratic political consultant told Mother Jones. “They’ve really raised expectations for themselves, they’re doing it to show they have credibility.” The conventional wisdom on both sides of the aisle was that Boehner genuinely wanted to avoid a shutdown and was scrambling to control a caucus with 54 members who voted against the last version of the continuing resolution.

But Boehner and the White House have still failed to come to a budget agreement, and the prospect of a government shutdown is looking more likely than ever before. House staffers are even distributing instructions on what to do if the government temporarily grinds to a halt. Though Republicans fault Democrats for the impasse, they’ve also admitted that some members of their own caucus have abjectly refused to compromise. So far, allowing Ryan to introduce his controversial budget—which raids sacrosanct entitlements—seems to be perpetuating intra-party disagreements.

Even Republican supporters of Ryan’s plan to upend Medicare and slash Medicaid aren’t quite sure why GOP leaders pushed out the proposal this week. “When you find out, will you let me know? I have no idea what the rationale is,” Rep. Lee Terry (R-Neb.) told Mother Jones. “I know that we had planned to do it at this particular time, but I really thought the [continuing resolution] issues would have taken up all the oxygen out there.”

By simultaneously introducing a 2012 budget with $4 trillion in cuts to entitlement spending, and pushing a 2011 budget that slashes $61 billion, the House GOP seems to be riding on the assumption that all Americans want from Washington are hatchet-wielding legislators. But along with GOP moderates like Brown, some conservatives outside Capitol Hill also warn of the risks of piling on when the political stakes are so high.

“With concern about shutdown in the air, there’s a huge focus on cutting spending,” said Kristen Soltis, director of policy research at the Winston Group, a GOP-leaning polling and consulting firm. “But Americans are still asking—where are the jobs? Americans want spending cuts, but they want job creation even more. Republicans may have a more challenging time messaging about how they think their 2012 budget can improve the economy if they’re also handling the immediate government shutdown threat.”

Soltis added, however, that Republicans are indeed trying to link the Ryan plan to job creation by arguing that such major spending reductions are necessary for economic growth. But that’s not what most Republicans were emphasizing on Tuesday outside the House floor, where they trumpeted the virtues of fiscal hawkishness—and emphasized that they were doing precisely what voters wanted. “I’m more optimistic about the voters,” said Rep. Mike Simpson (R-Idaho). “They’re recognizing that we have a long-term fiscal crisis on their hands.” Nebraska’s Terry, too, reasoned that massive, long-term cuts were simply what the public is demanding. “Everywhere, my colleagues and I are being asked, you’re only cutting $6 billion—why aren’t you guys going after Medicare, entitlement programs?”

Certainly, the GOP seems to be trying to rebrand itself as the “do-something” party after being accused of years of obstructionism, hugging the dreaded “third rail” by going after entitlements. “Nobody wants to go first,” said Simpson. “But the Republican Caucus is going to lead on this.” With the Democrats struggling to defend their own entitlement reform efforts—mostly contained in the politically toxic Affordable Care Act—they’ll have more leeway to do so.

But given the cracks already visible within the party on the Ryan plan, Republicans may have trouble simply uniting behind such a message—much less selling the American public on it.