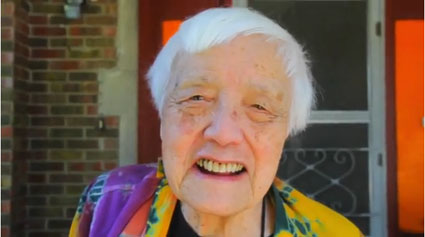 Grace Lee Boggs is a ninety-five-year-old veteran activist who is redefining what revolution means in the Motor City. Boggs’ new book, The Next American Revolution: Sustainable Activism for the Twenty-First Century is both a memoir and a manifesto—a portrait of a young woman’s journey through several major social movements, and the lessons she hopes to share with a new generation of activists.

In the early 1940’s the young Chinese-American woman finished her doctorate in philosophy and began looking for a professorship. She quickly found herself facing departments that unblinkingly told her, “We don’t hire orientals.” As if dealing with that racism wasn’t enough, she bucked the prejudices of the Civil Rights era and married Black Power and labor activist, Jimmy Boggs, in the early 1950’s. At the height of the McCarthy era, she was “radicalized” by hanging around Marxist leaders such as A. Phillip Randolph and C.L.R. James. Those influences stayed with her when she moved to Detroit, where she joined the race and labor movements during the city’s most riotous years.

Boggs encourages readers to redefine their own ideas about current efforts towards social justice. When I asked her what she thought about today’s class warfare: “We tend to think in terms of how to carry on the class struggle—how to reduce the scandalous and shamelss disparity from the wealth on the top and poverty on the bottom. We have to get outside of that particular paradigm. We have gotten used to the paradigm that allowed us to enjoy the comforts and conveniences that were won at the expense of other people and the Earth.” When pressed on whether it’s realistic to expect a complete overhaul of our institutions, without experiencing a major collapse, she piped,”We have experienced a major collapse in Detroit.”

And Boggs is no armchair revolutionary. At 95-years-old, she is one of Detroit’s citizens who is attempting to recreate the city and pass along her hard-earned wisdom to a population that suffers from 11.8 percent unemployment. In 1995, she and her now-deceased husband started the Boggs Center, which includes the Detroit Summer program, where urban kids learn how to garden, renovate Detroit’s dilapidated properties, and tackle crime through restorative justice training. Also, Detroit Summer’s Live Art Media Project produced a documentary called Rising Up from the Ashes: Chronicles of a Dropout that exposed the failures of the city’s school system.”We realized,” says Boggs, “the young people were part of the solution instead of the problem.” She hopes that Detroit can be rebuilt from the ground up—by the forgotten youth of a city notorious for despair. “Revolutions aren’t created by governments,” she smiled big, eyebrows raised in bright anticipation.

Hip-hop artist Invincible features Grace Lee Boggs and other youth participants in her video “Detroit Summer,” a duet with artist Waajeed that celebrates a cultural renaissance bubbling up in the city: