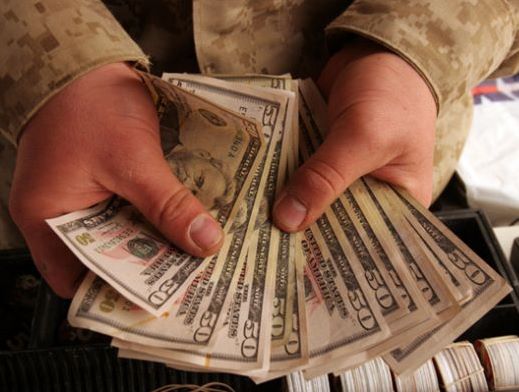 House Republicans want you to know what this budget battle and government shutdown are all about: screwing soldiers over. Many service members live paycheck to paycheck on modest incomes, and if no budget agreement is reached after Friday, a good number of them may be serving in a war zone for no pay until the Hill denizens are done duking it out. Hence the new GOP meme, typified in Suzy Khimm’s excellent shutdown update:

Faulting Democrats for pushing the country toward a shutdown, Rep. C.W. Bill Young (R-Fla.) noted that soldiers won’t get paid unless there’s a budget agreement. “You’ve got kids in the military serving in Afghanistan and Iraq whose wives are going to be wondering, ‘Why didn’t we get paid this month?'” Young said. “If they want that on their conscience, we’re covered.”…

When pressed about the bill’s policy riders, however, House Republicans demurred—and simply continued bashing Democrats for harming America’s troops. Asked whether the provisions were a dealbreaker, Rep. Tim Scott (R-S.C.) replied: “Not at this point. We’re going to pay attention and see what happens.” Instead, Scott—who’s one of two freshmen elected to be part of the GOP leadership—reverted to the GOP’s mantra of the day. If Obama’s “vetoing the troops, that’s his decision,” Scott told Mother Jones. “If he’s willing to leave the troops without a paycheck, that’s his decision.”

Republicans have stuck to this message with a singular discipline rarely seen since the heyday of Newt. Except this message doesn’t pass the smell test. The very same GOP congressmen crying “save the troops” are the ones who’ve been playing politics with the livelihoods of our (largely underpaid) serving men and women: For more than a week, they’ve had a bill, proposed by one of their own, that would keep soldiers’ paychecks flowing in a shutdown. And they’ve sat on it.

HR 1297, the Ensuring Pay for Our Military Act, was introduced back on March 31 by Louie Gohmert (R-Texas), with whom we’ve had our fun in the past. “If Congress cannot pass a budget, it’s not right for these valiant warriors and their families to suffer through a late paycheck. This is about paying those who protect us and defend our freedom,” Gohmert said in a much-ballyhooed rollout for the bill, which was covered by Fox News. Cosponsoring the bill are 106 members of Congress, mostly conservative Republicans, and it has no amendments, no riders, no pork: It simply mandates that troop pay continue as it normally would, through the end of the year, even if the federal government faces a funding gap and shutdown.

Yet it hasn’t been brought to the House floor for a vote. Gohmert hasn’t mentioned his own bill publicly since April Fool’s Day.

A GOP-led Congress ought to be able to pass a stripped-down, GOP-sponsored bill to fund troop salaries pretty easily. And since the bill’s focus is so narrow, it shouldn’t have much trouble getting approval from the Senate and President Obama. Yet HR 1297 languishes on the desks of the GOP-led committees on armed services and transportation and infrastructure, where it will stay “for a period to be subsequently determined by the Speaker.”

So why can’t Speaker John Boehner (R-Ohio) get together with the committee chairman and pass that bill? That’s exactly what I hope to ask members of Congress (who’ll still be getting paid) on Friday. But trying to paint Democrats as anti-troops would be a lot harder if the troops were actually getting paid, wouldn’t it?

At least one GOP freshman congressman thinks that’s the case. Rep. Allen West of Florida called his own party out on Thursday for toying with military salaries. “The House majority has now placed the funding for the Department of Defense and the funding for the troops down as a bargaining chip,” he said Wednesday. “I am disgusted at the perception that the leaders in my own party who did not move a defense bill earlier…are now using the men and women in uniform.”

If Republican House leaders are putting politics above service members’ welfare, it wouldn’t be the first time…this week. Or even the second. On Wednesday, Democrats offered two different motions that would have continued funding for military pay through December. On the first, offered by Rep. Bill Owens (D-N.Y.), only a single Republican crossed the aisle to vote for it. On the second, sponsored by Steny Hoyer, every GOPer voted no.

This is pretty standard operating procedure for GOPers in the House. Last month, I reported on how a Republican-run House subcommittee halted an Army plan to stop buying unneeded Humvees and use the $862 billion in savings on equipment that would protect US bases in Afghanistan from mortar and rocket attacks. The leader of that subcommittee: Florida’s C.W. Bill Young, who talked tough all day Wednesday about tossing soldiers’ families a financial lifeline. Rather than protect soldiers downrange, he wanted them to take the unnecessary vehicles. Perhaps that’s because AM General, the Humvee manufacturer, is one of his largest campaign donors, to the tune of $80,000. Which by itself is enough to pay a couple of infantry corporals.

But that’s ancient history, as far as this Congress is concerned. The salient point, as we enter shutdown mode, is this: Republicans have had at least three opportunities this week to preserve the livelihoods of US service members and their families, while keeping the budget debate open. They had their moment. They had their chance. They have not led.