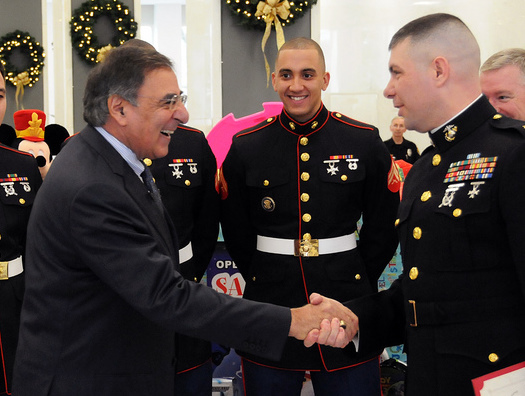 Facing a military budget battle, Iraq and Afghanistan drawdowns, and a political clash over the country’s global security strategy, Barack Obama needed a new defense secretary who could either win over Capitol Hill or cow it into cooperating. He needed new blood. Instead, he promoted the old guard, announcing today that Leon Panetta, the 72-year-old CIA director, would be nominated to replace Robert Gates later this year.

There’s no question that Panetta’s long career of public service—from running the Office of Management and Budget to working as Bill Clinton’s chief of staff to his current contentious position—prepares him well to steer a large bureaucracy through political minefields. But with conservatives already painting him as a Left Coast Democratic stalwart, his good ideas are likely to meet stiff partisan resistance in Congress. And in picking a consummate political insider for the DOD post, Obama passed over two top-notch candidates, missing a chance to disarm conservatives with a defense-savvy Southern Democrat…or a bold, history-making woman.

The Southern Democrat in question was Ray Mabus, the current Navy secretary, who’s also served as Bill Clinton’s ambassador to Saudi Arabia. More importantly, Mabus was the last blue-party governor of Mississippi, having ascended to that office on his strengths as the state’s auditor. A crusader against fraud, waste, and abuse, Mabus also earned a reputation as an “education governor” with a comprehensive plan to bootstrap that state’s floundering school system.

Popular with the White House and the Navy’s officer ranks (to which he belonged in the ’70s), Mabus’ influence is far more evident than most service secretaries: He oversaw the opening of the submarine service to women, a move that’s spurred wider debates on the military’s aging rules “no women in combat” rules. He spearheaded the sea forces’ new concern for environmental impacts and energy efficiency, pressuring the other services to follow suit. And, given his natural ties to the Gulf of Mexico, he led the White House’s efforts to draft a long-term restoration plan for the Gulf Coast in the wake of last year’s BP Transocean spill. Moreover, Mabus likely would have joined a long line of Southern Democrats who earned bipartisan support on defense policies, including John C. Stennis and Sam Nunn.

An even bolder choice for the White House would have been Michele Flournoy, Gates’ current undersecretary of defense for policy. An Oxford grad and longtime Democratic military adviser, Flournoy in 2007 cofounded the Center for a New American Security, a left-leaning defense think tank in a Beltway packed with right-wing defense “experts.” The highest-ranking woman in DOD history, Flournoy’s worked mostly behind the scenes, bending the ears of Obama, Vice President Joe Biden, and Secretary of State Hillary Clinton to give an overworked military establishment some future direction. She would have been a surprise pick to get the top job, and her political resume is lighter than her administrative one. But the historic nature of her nomination would have put conservative critics (except maybe Allen West) on their heels. And given the administration’s desire for transformative defense cuts, her nomination might have been a perfect start to a revolution in American military policy.

In truth, Panetta’s selection was probably a foregone conclusion for quite some time in the Pentagon’s top offices. In recent months, a bevy of officials, from Gates and Joint Chiefs Chairman Mike Mullen on down, have publicly pressed the importance of making the military more environmentally friendly and energy efficient. That culminated in the publication earlier this month of a “National Security Narrative” (PDF) by two of Mullen’s flag aides—a sweeping document that encourages the US to cut defense spending, invest in domestic infrastructure and education, and make environmentalism a priority. Those are great ideas, to be sure…but they also happen to dovetail with the interests of Panetta, a Monterey Bay, California, native and staunch green crusader who in 2000 co-chaired the president’s Joint Ocean Commission along with with a retired admiral.

The conventional wisdom is that “the White House could not have made a safer choice,” as echoed by Dov Zakheim, a Bush-era DOD undersecretary, on Foreign Policy today. “Panetta has demonstrated that he is a reliable part of the administration’s team.” Still, the new defense secretary will have a lot of political wrangling to deal with, inside and outside the Pentagon’s E-ring—from trimming the fat off big-ticket projects like the F-35 and F-22 fighter jets, to battlefield drawdowns, to selling Congress on a Van Jones-style green agenda for the military. And already, the right is painting Panetta as the wrong ideologue for the job. “There hasn’t been a Democratic politician in charge of the Pentagon since former Wisconsin Rep. Les Aspin held the post in the first year of the Clinton administration, but the old model is coming back into vogue,” blathered Fox News this morning, before asserting, without warrant, that the selection of Panetta (“a budget guy, not a military guy”) was “particularly alarming to Pentagon types.”

Less-shrill conservatives like Zakheim give Panetta a fairer shake: The CIA director has “worked well with DOD,” he says. But dealing with Republicans in Washington will be a lot messier. “He will do all he can to ensure that defense is not an issue in the forthcoming election,” Zakheim says, ominously adding: “That the Republicans are certain to make it an issue will be no fault of his.”