Presidents pay taxes, too. They’re not obligated to reveal what they owe, but ever since Richard Nixon was caught stiffing the IRS, every resident of the Oval Office has released his tax returns (sometimes starting on the campaign trail). For the curious and/or wonky, Tax History Project has collected the returns of eight presidents, including FDR. Examining a sample of these filings, from Roosevelt’s 1929 paperwork to Obama’s latest 1040, provides a unique glimpse into presidents’ financial affairs. 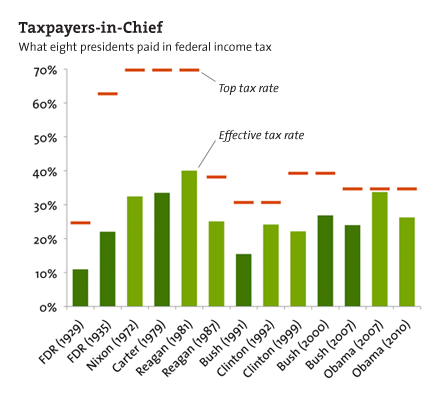 Franklin D. Roosevelt’s returns harken back to an era when federal tax rates where considerably lower. In 1929, FDR paid about 11% in taxes and gave away 12.5% of his income. Interestingly, following a rate hike in 1932, his charitable giving dropped to about 3%. (A couple of the recipients of his largesse: the Will Rogers Memorial Fund, $100; the American Ornithological Union, $3.) As Reason notes, FDR wasn’t above trying to avoid paying his fair share of taxes, either: In 1937 he tried to talk the IRS into taxing him at 1933 rates.

In the 13 returns sampled here, Ronald Reagan paid the highest effective tax rate, 40% in 1981. Yet by 1987, his signature tax cuts had gone into effect and he forked over 25% of his income, which had included $1,312 in residuals from his movie career and $281 in royalties from his autobiography, Where’s the Rest of Me?

George Bush the elder wins the prize for charitable giving—he gave away nearly 62% of his $1.3 million income in 1991. Some of his donations: $40 to the Yale Class of 1948 fund, $1,000 to the Desert Storm Foundation, and $789,176 to a lucky organization called the Barbara Bush Foundation for Family Literacy.

Buried in Bill Clinton’s 1992 return are hints of the incoming president’s dietary habits and forthcoming legal hassles: A $60 dividend from TCBY and a $1,000 gain from the Whitewater Development Corporation.

In 2007, then-Senator Barack Obama paid a 33.7% tax rate on more than $4 million in income. His 2010 return (made public last week), shows that the president’s post-election income has dropped while his charitable giving has increased. An addendum (PDF) discloses that he donated $100,000 of his Nobel Prize winnings to the charity run by recently discredited Three Cups of Tea author Greg Mortenson. However, he did not claim his Nobel money on his tax forms since he gave it all away. Generous, but also a savvy tax-reduction move.