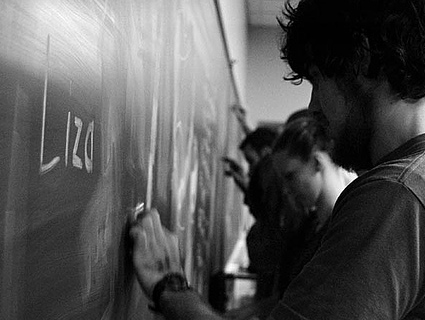 “I am 47 years old and I still carry, tucked away in my briefcase, the note Mrs. Charlene Snyder wrote in my yearbook when I graduated from high school. ‘Please know,’ she wrote, ‘what a fine person you are and the great ability you possess. A little confidence never hurt anyone.’ Whenever I read it, I remember how I felt. Those words gave me wings. I strive to live up to her view of me every single day.” —Peyton Taylor, Public Insight Network

As the editor of Mother Jones‘ Mission High School series, I’ve developed a new respect for how hard many teachers work to help the kids in their care. I started wondering: What moments do kids and parents remember years later about the teachers they loved or respected? In what ways did these educators change people’s lives? Below, teacher tales from Mother Jones‘ recently launched Public Insight Network (join here to help MoJo reporters with a range of future stories):

“I’m Hmong-American and grew up in a very poor family. I was always self-conscious of those two factors that made me so different from my peers. One of my favorite teachers was Mrs. Grover in 6th grade, because she treated me no differently that she did others. I never felt out of place in her class. I remember telling her about the foods we ate at home and teaching her Hmong words. She showed interest in my culture and in my life at home, and that meant a lot.”
—May Chang, Wisconsin

“The best teacher I had was Mike Hill, my English teacher and newspaper adviser. One week I was working on a staff editorial with another student in my newspaper class, but our ideas kept falling through. My partner ended up backing out on me and eventually I had to do everything on my own. When Hill asked me, in private, how the story was going—he knew I’d been having trouble with it—I broke down and began to cry. I was ashamed that things were not going well for me, but I couldn’t help it. I tried to explain, between sniffles, all the stress I was under, and finally Hill interrupted and said, ‘What class is this?’ I was confused, and replied, ‘Um. Newspaper?’ He said, ‘No, it’s high school newspaper. It doesn’t matter.’ I laughed his remark off, but he was serious; he explained that no one is going to care that I missed an assignment for a high school class. He wasn’t going to hold it against me, he could see how hard I’d been working on it, and he said that there would be more important things later. Then he added, with a wink, ‘You know things are bad when people like Rachel start losing it.’ (It’s true, I was that kind of goody-two-shoes in high school.) Then, in typical editor fashion, he told me to get back in the newsroom and get back to work. After wiping away a tear or two, I did. And he was right, I was absolutely fine.”
—Rachel Jackson, Michigan

“I was extremely shy in the third grade and Mrs. Sampley was extremely outgoing. It would have been so easy for me to have gotten lost—classroom sizes were much bigger then and there were no teacher’s aides. Mrs. Sampley saw something in me though and pulled it out in a way that respected my shy personality. By the end of third grade I had come out of my shell. Instead of being happy on the last day of school that year, I cried.”
—William Sowka, Connecticut

“Pat Jurek encouraged me to go to university when I was overlooked by others. She knew I wanted to become a drama teacher, and when my parents did not have enough money to send me on the senior trip my last year of school she paid the rest of the money. She wanted me to go to New York, the Shakespeare festival in Canada, and finally the International Thespian Convention that was held in Muncie, Indiana, just to make sure that theatre was what I wanted to do. Almost 21 years of teaching later, I have no regrets.”
—Mark Webber, Texas

“Mr. Druck was my child’s second grade teacher. From the first day of school he’s been so supportive of a child that struggles to make it through a school day. He made an effort to get to know my son, adjust certain environmental factors to make it easier for him to learn, and interacted with him like he cared. Mr. Druck recognized that my son is such a tactile learner that he literally can’t hear if he just has to sit there without touching anything. He has to move his hands, touch something, to keep his ears working. Second grade teachers love to make kids sit on the carpet for instructions and sitting still is what you have to do. He moved my son’s “spot” to the corner, pulled up the edge, and told him to fiddle with the carpet and listen. Immediately my son’s ability to know what to do when he got back to his desk changed.”
—Jaelene Smith, Arizona

“My child has High Functioning Autism—a diagnosis that has mostly meant fighting tooth and nail to get him any kind of help and having him constantly labled as a behavior problem. Mrs. Missy Hill sees potential instead of problems and finds success for every student in her room. Also, she taught him to tie his shoes after his OT said that he would never be able to do it.”
—Julie Atwood, South Dakota

“In 12th grade Civics, Mr. Johnson was no-nonsense, focused, and determined to get the best from each student. It didn’t matter if you came into his class as an overachiever or underachiever, he expected you to participate.”
—Tracy Bramlet, Ohio

Do you have a tale of a teacher who made a difference in your life? Share it in the comments below, or join MoJo’s Public Insight Network to contribute to future stories on education, health care, and the economy.