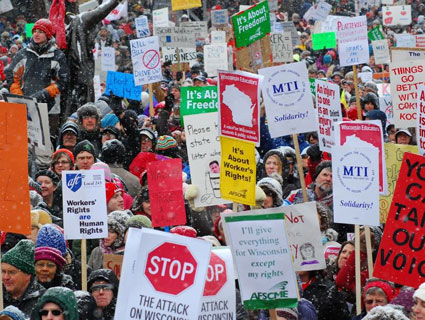 From New Hampshire to Alaska, Republican lawmakers are waging war on organized labor. They’re pushing bills to curb, if not eliminate, collective bargaining for public workers; make it harder for unions to collect member dues; and, in some states, allow workers to opt out of joining unions entirely but still enjoy union-won benefits. All told, it’s one of the largest assaults on American unions in recent history.

Behind the onslaught is a well-funded network of conservative think tanks that you’ve probably never heard of. Conceived by the same conservative ideologues who helped found the Heritage Foundation, the State Policy Network (SPN) is a little-known umbrella group with deep ties to the national conservative movement. Its mission is simple: to back a constellation of state-level think tanks loosely modeled after Heritage that promote free-market principles and rail against unions, regulation, and tax increases. By blasting out policy recommendations and shaping lawmakers’ positions through briefings and private meetings, these think tanks cultivate cozy relationships with GOP politicians. And there’s a long tradition of revolving door relationships between SPN staffers and state governments. While they bill themselves as independent think tanks, SPN’s members frequently gather to swap ideas. “We’re all comrades in arms,” the network’s board chairman told the National Review in 2007.

Occasionally, SPN think tanks boast of their clout. Such was the case when the Tennessee Center for Policy Research bragged on its website recently that it “leads the charge against teachers’ union” and “laid the groundwork” for the bills now in the Tennessee legislature to restrict, and possibly eradicate, bargaining for public school teachers. More often, though, the fingerprints of SPN’s members are less apparent.

Founded in 1992 by businessman and Reagan administration insider Thomas Roe—who also served on the Heritage Foundation’s board of trustees for two decades—the group has grown to include 59 “freedom centers,” or affiliated think tanks, in all 50 states. SPN’s board includes officials from Heritage and right-wing charities such as the Adolph Coors and Jacqueline Hume foundations. Likewise, its deep-pocketed donors include all the usual heavy-hitting conservative benefactors: the Ruth and Lovett Peters Foundation, which funds the Cato Institute and Heritage; the Castle Rock Foundation, a charity started with money from the conservative Coors Foundation; and the Bradley Foundation, a $540 million charity devoted to funding conservative causes. SPN uses their contributions to dole out annual grants to member groups, ranging from a few thousand dollars to $260,000, according to 2009 records.

According to SPN’s website, Roe launched the conservative network “at the urging” of President Reagan himself as a way to shape state-level policy just as Heritage has influenced federal policy. Surveying the political landscape today, Roe’s and Reagan’s idea couldn’t have been more prescient. More than a dozen states are currently considering legislation weakening the clout of organized labor. In many of those states, SPN think tanks have been pushing for similar prescriptions for years via “research” papers, policy recommendations, and talking points that are widely distributed to lawmakers.

In Michigan, as Mother Jones previously reported, the Mackinac Center for Public Policy, an SPN member, published a list of four policy recommendations that would give unelected “emergency managers” more power to go into municipalities and wipe out union contracts and fire local elected officials, all in the name of repairing broken budgets. All four ended up in Governor Rick Snyder’s “financial martial law,” as one GOP lawmaker described it. The bill was signed into law in March.

The Nevada Policy Research Institute (NPRI) has for more than a decade bashed the Silver State’s efforts to pass collective bargaining laws and accused unions of trying to “monopolize the public sector.” In March, Nevada Republicans, citing NPRI data, introduced a bill of their own to weaken bargaining rights. There, as in other states considering similar measures, GOP lawmakers called on an SPN staffer to testify on the bill, which he did favorably.

In California, where a Republican lawmaker introduced a bill in February to repeal collective bargaining on retirement benefits for public workers, the Pacific Research Institute (PRI) has churned out a steady stream of reports and op-eds claiming that teachers unions use collective bargaining to “neuter school board authority, protect bad teachers, restrict principals, emphasize seniority over performance, and limit teacher evaluation and accountability.” That is, bargaining is to blame for just about everything that’s gone wrong. A 2003 PRI paper recommended that policymakers “streamline or repeal” collective bargaining for teachers.

When SPN think tanks are not providing conservative lawmakers with ammo, they’re providing them with cover as they take on organized labor. In Wisconsin, as Republican Gov. Scott Walker weathered criticism and sinking approval ratings for his anti-union “repair” bill, the MacIver Institute and Wisconsin Policy Research Institute, both SPN members, rushed to his defense. MacIver lauded Walker’s controversial bill as a “step in taming the behemoth” of big government caused by public-sector unions. Meanwhile, a staffer for the Wisconsin Policy Research Institute (and former Wisconsin legislative aide) defended Walker’s bill in an error-riddled New York Times op-ed as “fiscally modest, but politically bold.” As tens of thousands poured into the streets of Madison to oppose Walker’s bill, MacIver even cut a video that dismissed the pro-labor protesters as radicalized communists and socialists.

More recently, the Oklahoma Council of Public Affairs, another SPN member, urged lawmakers to “follow Wisconsin’s lead” and curb collective bargaining rights for public workers, and the GOP-controlled state Senate voted to do so soon after. Republican Gov. Mary Fallin is expected to sign the repeal into law.

SPN think tanks do more than merely pepper politicians with briefings and a barrage of policy recommendations; they also serve as a farm team for the GOP. Reps. Jeff Flake (R-Ariz.) and Mike Pence (R-Ind.) and former Rep. Tom Tancredo (R-Colo.) all ran SPN think tanks before entering Congress. Following his election in 1994, Massachusetts Gov. William Weld, a Republican, “hired almost everybody” (PDF) out of SPN’s Pioneer Institute in Massachusetts, according to an SPN official.

In Michigan, the GOP and Mackinac Center have been particularly close. Before serving as Michigan’s governor, Republican John Engler helped found the center in the late 1980s, and the two-term governor would go on to implement many of Mackinac’s recommendations. (Engler and the think tank did, however, disagree on a few issues.) In 1995, Engler also appointed Joseph Olson, Mackinac’s long-time board chairman, to oversee Michigan’s insurance commission. “The Mackinac Center has been tied at the hip with the Republican Party establishment for years,” a spokesman for the Michigan Education Association says.

The SPN revolving door spins both ways. Brooke Rollins, president and CEO of the Texas Public Policy Foundation (TPPF), previously served as Republican Gov. Rick Perry’s deputy general counsel and the head of Perry’s policy division, overseeing the administration’s work on everything from health care and education to criminal justice. Jeff Judson, who led the TPPF before Rollins, did stints in the offices of Sen. John Tower and Rep. Tom DeLay, as well as in the George H.W. Bush administration’s Department of Energy. Forest Thigpen, president of the Mississippi Center for Public Policy, is a former aide in the DC office of Sen. Thad Cochran (R-Miss.).

Tracie Sharp, SPN’s president, told Mother Jones in an email that member think tanks “set their own policy agendas” and “have always been fiercely independent.” But those on the other side of the fight see the think tanks as part of a broader effort. “This is not a grassroots movement to eliminate collective bargaining,” says Al Mance, executive director of the Tennessee Education Association, the state’s largest teachers union. “This is a national movement, and it’s funded by all the conservative moneyed interests.”