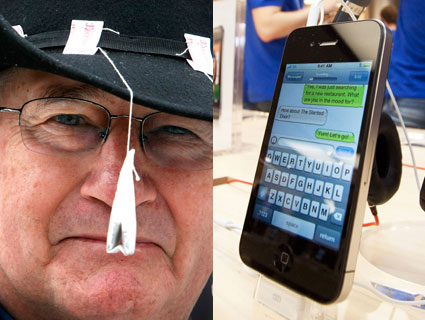 For the past year, tea party groups have been rallying their members to oppose “net neutrality,” the rules outlined by the Federal Communications Commission (FCC) that ensure a level playing field on the Internet. The rules prevent big corporate Internet providers like Comcast from discriminating against different types of content and applications, or from trying to force website operators to pay more for their content to be accessible online. That way, Internet providers can’t limit users’ access to preferred sites (i.e., the ones who pay more). The rules, in effect, ensure that even the smallest, poorest tea party group has the potential to reach a large audience through its website, unimpeded by Comcast and other big companies.

Yet tea partiers inexplicably equate net neutrality with Marxism. Last fall, when activists were organizing around the issue, Jamie Radtke from Virginia Tea Party Patriot Federation and a current Senate candidate, said of net neutrality: “I think the clearest thing is it’s an affront to free speech and free markets.” This week, ahead of today’s House vote on a measure that would roll back the FCC’s net neutrality rules, Tea Party Patriots blasted an urgent alert to activists urging them to call on lawmaker to vote in favor of the move:

Net neutrality is an innocuous sounding term for what is really media Marxism. This is an ideological attempt by those on the left to control the greatest means for the distribution of information ever devised. It provides a playing field which the government does not control, and this is immensely troubling to those on the left.

The tea party’s position on net neutrality has seemed counterintuitive, given just how badly conservative activists could be screwed by the big cable and phone companies should net neutrality rules be repealed. The whole movement has been organized online, making the Internet’s level playing field a crucial element to its success. Yet tea partiers claim that net neutrality is just another sign of government overreach. They don’t seem to recognize that they are effectively advocating against their own interests—and Comcast is more than happy to have their help in doing so.

A New York Times story this weekend helps to explain the tea party’s odd net neutrality fixation. The story focused on a conservative Astroturf group that has cozied up to the tea party movement to advance political causes for various corporate interests, everything from protecting Asian paper companies from US tariffs to—you guessed it—fighting net neutrality.

The Institute for Liberty, as the group is known, is headed by Andrew Langer, a former executive at the National Federation of Independent Business, a lobbying organization that claims to represent small businesses but often walks in lockstep with the US Chamber of Commerce. The Institute has been a regular presence at tea party events for the better part of two years. Langer himself spoke at the Tea Party Patriots “continuing revolution” protest in DC last week. He freely admitted to the Times that various interest groups have given him money to push activists on pet issues (though he declined to disclose the donors):

In a recent interview, he explained how the institute pitched its services to opponents of the Obama health care plan, resulting in a $1 million advertising blitz. “A donor gave us some money, and we went out on the ground in five states in the space of like six weeks,” he said.

In a classic Astroturf move, the Times also discovered that the Institute had used the names of dead people on a “grassroots” petition it sent to the US Department of Agriculture supporting efforts by the chemical giant Monsanto to relax restrictions on its pesticide-resistant alfalfa. The paper credits Langer with getting tea partiers to oppose net neutrality. Given just how contrary the tea party position on net neutrality is to the movement’s own best interests, Langer should be congratulated on his PR coup.