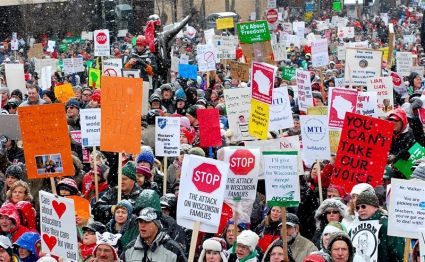 [UPDATE: As of 9:30 a.m. on the morning after election day, the Prosser-Kloppenburg race remains too close to call. With 99 percent of precincts reporting, Prosser owns a narrow 835-vote lead. But there are 24 precincts still outstanding, 22 of those in counties where a majority people voted for Kloppenburg. Read my latest on the race here.]

The uprising in Wisconsin this winter vividly illustrated that labor unions and progressive groups could still mount a massive fight when pressed. But can the outrage and determination that fueled the Madison protests be channeled into a victory at the ballot box? That’s the question, as Wisconsinites today vote to fill a crucial swing seat on the state’s seven-person Supreme Court.

The race pits sitting Justice David Prosser, a conservative, against longtime Assistant Attorney General JoAnne Kloppenburg, a political novice. The outcome will determine whether the Badger State’s high court tilts to the left or to the right. A Kloppenburg upset would send a strong signal that unions and left-leaning groups in this swing state are indeed a force to be reckoned with heading into the 2012 presidential election—that is, that Wisconsin’s progressive tradition is alive and well. A Kloppenburg loss would take the wind out of the left’s sails, just as progressives in the state are trying to recall a slew of Republican lawmakers for their anti-union votes.

Two months ago, the election seemed a done deal. Prosser cruised to an easy victory in the February four-way, multi-party primary, winning 55 percent of the vote. Kloppenburg finished a distant second with 25 percent. At the time, Prosser seemed assured of a cakewalk ahead, and he remarked that Kloppenburg’s only shot at winning was to attack him. “She would have to say something negative because she doesn’t have anywhere near the as many votes as I do,” Prosser told the Associated Press.

But earlier that week, Madison, the capital city, had erupted into protest over Republican Gov. Scott Walker’s anti-union “budget repair bill” and his threat to use the state National Guard to quell protests. As the Madison protests grew in size and scope—they sparked “solidarity” protests throughout Wisconsin and the nation—the labor unions and progressive organizers behind the events in Madison set their sights on the Prosser-Kloppenburg race.

Quickly, the race transformed from a little-noticed judicial election to a liberal cause célèbre. National media started covering the contest, and the flow of outside cash into the race grew from a trickle to a rush. While both candidates pledged to use Wisconsin’s public financing system for their campaigns, limiting them to $100,000 in the primary and $300,000 for the general election, outside independent groups, including the Tea Party Express, have taken out ads and ginned up contributions for the preferred candidate.

Conservative groups have fought back. The Wisconsin Club for Growth ran a television ad touting Prosser’s experience on the state’s high court and his strong record on law enforcement. “During his 12 years on the Wisconsin Supreme Court,” the ad’s smoky-voiced narrator says, “Prosser has helped strengthen the hand of law enforcement and helped keep dangerous criminals behind bars.” And a pair of ads from the Wisconsin Manufacturers and Commerce paint Kloppenburg as weak on law enforcement. By April 1, special interest groups had spent nearly a whopping $2.4 million on the Prosser-Kloppenburg race.

There have been few independent polls in the race, and so it’s difficult to gauge how the barrage of negative ads has affected the candidates’ standings in the eyes of the people. However, internal polling by Prosser’s campaign, as the National Review‘s Robert Costa reported, shows the candidate at near even, a bad sign for Prosser. One insider told Costa, “She has driven his negatives up. It will be hard to drive hers up…The question now is: Does the right have enough resources to counter the Greater Wisconsin Committee’s millions? And even if they do, is it too late?”

A Kloppenburg win wouldn’t be the first time a Democratic Supreme Court candidate in Wisconsin rode a wave of negative assaults to victory. In 2008, conservative Mike Gableman peppered his opponent, sitting Justice Louis Butler, with attack ads and accused Butler of being soft on criminals. In that race, outside groups funneled $3.3 million into TV ads, setting a new record for a Wisconsin judicial race and paving the way for Gableman to upset Butler. Not in four decades had a challenger unseated a sitting state justice.

Though she’s probably gained on Prosser, Kloppenburg has been hindered by a lackluster campaign organization and her own political naïveté. Last month, one organizer who offered to help the campaign said he was startled when a Kloppenburg staffer didn’t know what GOTV stands for. (It’s common political shorthand for “get out the vote.”) Robert Kraig, the executive director of Citizen Action of Wisconsin, a progressive group, says an operative connected to Kloppenburg’s campaign called to ask how the race was playing out in Milwaukee, where Kraig is based, because the campaign didn’t have any idea what was going on in the state’s biggest city.

For his part, Prosser has had his share of slip-ups. An early press release sent out by his campaign said that Prosser, if elected to the court, would complement Gov. Walker and other conservative lawmakers, a statement seized on by Democrats and later disowned by Prosser. Prosser has also admitted to calling Shirley Abrahamson, the liberal chief justice of Wisconsin’s Supreme Court, “a total bitch,” which his opponents have gleefully used against him. More recently, former Wisconsin Gov. Pat Lucey, a Democrat who was an honorary co-chair of Prosser’s re-election committee, switched from supporting Prosser to backing Kloppenburg, citing Prosser’s “disturbing distemper and lack of civility.”

The winner of the Prosser-Kloppenburg race could decide whether Walker’s “repair” bill, which would eliminate collective bargaining on health care and retirement benefits for most public-sector unions, is upheld or ruled in violation of a state open meetings law. In late March, a state appeals court said that the fate of Walker’s bill must be decided by the state Supreme Court because the bill “has broad statewide implications for the general public.” The winner of the court’s swing seat could ultimately cast the deciding vote on the legality of the bill.

Before the votes are counted, Wisconsin progressives have considered the race a victory. Months ago, no one thought Kloppenburg had a chance of toppling Prosser. That she became a competitive challenger indicates that energy from Wisconsin’s protests can be funneled into electoral politics. “Had the protests not happened, Prosser would’ve skated to victory with an easy victory,” says Robert Kraig. “Even if she comes up short, a very powerful message has been sent.”