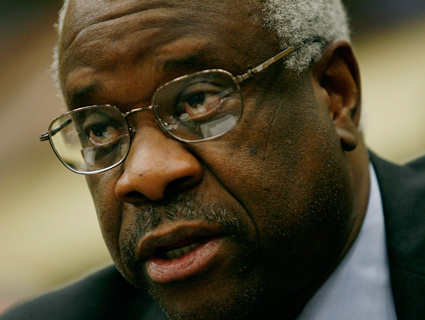 Following a time-honored Washington tradition of dumping required but embarrassing information on a Friday night before a major holiday, Supreme Court Justice Clarence Thomas finally released the details of his wife’s income from her year or so working for the tea party group Liberty Central, which fought President Obama’s health care reform law. His new financial disclosure form indicates that his wife, Virginia, who served as Liberty Central’s president and CEO, received $150,000 in salary from the group and less than $15,000 in payments from an anti-health care lobbying firm she started.

The disclosure was apparently prompted in part by Rep. Anthony Weiner (D-N.Y.), who had been needling Thomas (including on Twitter) for months to disclose how much money his wife earned from Liberty Central. That’s because challenges to Obama’s health care reform law are likely to end up before the Supreme Court sooner rather than later, and if Thomas and his wife benefited from her income working against the bill, the justice has an enormous conflict of interest in hearing any legal challenge. Thomas had failed to disclose Virginia’s income on his financial disclosure forms for 20 years; under pressure from Weiner and others, he had recently amended old disclosures to reflect hundreds of thousands of dollars she had earned working for the Heritage Foundation, the conservative think tank that also opposed Obama’s health care plan.

But, up until now, Thomas had not revealed how much money his wife made from her controversial Liberty Central work. When Virginia Thomas decided to take a high-profile role in the organization, she was immediately criticized because of the potential that her job might compromise her husband’s independence on the bench. Eventually, she was forced to step down (a move also apparently prompted by her bizarre October phone call to Anita Hill, the woman who’d accused her husband of sexual harassment during his confirmation hearing). When she left the organization, she created a new consulting firm, Liberty Consulting, which also did anti-health care reform lobbying. Justice Thomas finally released the details of her compensation Friday night, but the disclosure, and Weiner’s triumphant press release announcing the move, were largely overshadowed by Weinergate.

Over the weekend, Weiner’s Twitter account was allegedly hacked and Tweeted a photo of a near-naked man to a college student. Conservative media mogul Andrew Breitbart published the photo on his site, Big Government, and the feeding frenzy was furious enough to ensure that Thomas’ news barely saw the light of day. Still, if and when health care reform makes its way to the Supreme Court, Thomas will have a much harder time making his conflict of interest go away.