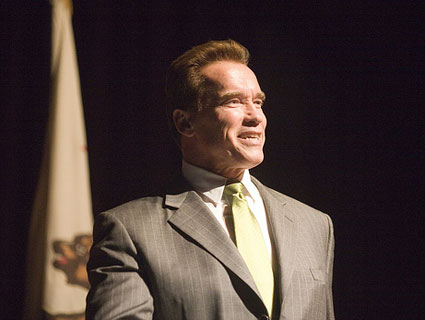 The most prominent Republican voice for climate action is now in the (hound)doghouse. Turns out the Sperminator has been pumping more than iron.

If you’re as revolted as I am, you might be tempted to toss the bum permanently overboard—but can we afford to?

At a time when every Republican presidential contender is arguing against climate action, when more than half of the Republicans in Congress question whether climate change is even happening, let alone whether we should do anything about it, Arnold Schwarzenegger has been consistently leading the charge against climate change and for clean energy.

He has long since lost favor with the GOP base—if he ever had it—but Schwarzenegger still commands a huge audience and is much more likely to reach Joe and Jane Six-Pack than are the pip-squeaks holding climate-denying hearings in the House or the milquetoast Democrats opposing them.

While governor of California, Schwarzenegger signed the landmark Global Warming Solutions Act (aka AB 32), laying the groundwork for the nation’s first mandatory, statewide cap-and-trade system to go into effect in 2012. Last year, he pushed hard to defeat the oil-industry-funded initiative, Prop 23, that would have repealed that climate law. He fought automakers and the Bush administration for the right to impose tough vehicle emissions standards in California, paving the way for the Obama administration to adopt tougher standards nationally.

Along the way, he’s been effective at communicating climate concerns to the masses—not in terms of parts of million, but in terms of macho climate heroes versus girlie-men deniers. Sure, he did dumb stuff like keep a fleet of Hummers and fly daily between L.A. and Sacramento, but all in all, the Governator was a force for green.

Post-governorship, Schwarzenegger has been positioning himself as an ambassador for cleantech, speechifying about climate change on the global stage, and building up the R20 climate network that he launched late last year to promote action by local and regional leaders around the world. Oh, and he’s been signing movie deals, preparing to star in a cartoon kid series, and maybe even considering a run for president of the European Union.

For now, with his tawdry infidelities and marital deceptions dominating the headlines, all that looks to be on hold. But the man who made “I’ll be back” into a cliché won’t want to stay in the shadows forever.

Will he join other (semi-)forgiven philanderers like Bill Clinton, Newt Gingrich, and Eliot Spitzer and reclaim his place in public life? Or, considering the particular humiliations to which he has subjected his wife and family, will he be shunned for the long term like John Edwards? Climate hawks should hold their noses and hope for the former.

As Jeff Goodell writes at Rolling Stone, “It pisses me off that Schwarzenegger’s personal life is getting in the way of his larger, and far more important, public mission. But that’s the way things go in America. It’s so much easier to gossip about Arnold’s sins than face our own—like the fact that we are cooking the planet with fossil fuels.”

I expect that after a few months of quiet penance, Ahnold will try to stage a comeback. And what better way to repair his image than a reinvigorated campaign to terminate the greatest threat known to humankind, climate change? Beats another “Terminator” movie.

This post was produced by Grist as part of the Climate Desk collaboration.