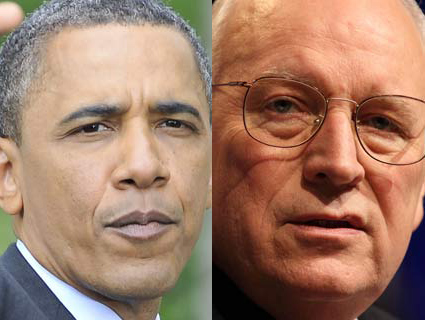 Ever since Obama entered the White House, the former vice president has been decrying him as a weak leader whose actions place the nation at risk. He’s been the lead-singer of the Obama-is-bad-for-national-security mantra on the right. Yet in the wake of the successful raid on Osama bin Laden’s suburban compound, Cheney has not rescinded his previous assaults on the president.

The ex-veep did release a statement hailing the operation as “a tremendous achievement for the military and intelligence professionals who carried out this important mission. Their tireless work since 9/11 has made this achievement possible, and enabled us to capture or kill thousands of al Qaeda terrorists and many of their leaders.” (Cheney did not rush into the debate over whether enhanced interrogation techniques—or torture—had yielded the intelligence nuggets that led to Bin Laden’s comfortable whereabouts.)

Almost as an aside, in that statement, Cheney added one line about the president, “I also want to congratulate President Obama and the members of his national security team.” But there was, of course, no reference to Cheney’s past criticism of Obama and no recognition that Obama had, if only in this episode, performed ably as commander in chief. After all, any such acknowledgment, however slight, would undermine over two years of Cheney’s Obama-bashing.

But let’s roll the tape. In 2009, after Obama was in office less than a month, Cheney told Politico that there was a “high probability” that terrorists would attempt a nuclear or biological attack in the coming years and that, thanks to Obama’s policies, the odds were better that such an assault would succeed. He also said, “When we get people who are more concerned about reading the rights to an Al Qaeda terrorist than they are with protecting the United States against people who are absolutely committed to do anything they can to kill Americans, then I worry.”

This was no hint: Cheney was accusing Obama of caring more about process than the security of the American people. That was a profoundly serious charge. The former vice president was not merely engaging in a debate over Obama’s national security policies; he was suggesting that his adminstration fretted more about terrorists’ civil liberties than the lives of American citizens. Cheney’s real charge was not that Obama was wrong (any leader can make an ill-advised policy choice), but that Obama really wasn’t devoted to defending the United States. Cheney was not merely arguing about the best way to counter terrorists; he was trying to delegitimize Obama as commander in chief.

A month later, Cheney, in an interview with CNN, continued this line of attack: “Now [Obama] is making some choices that, in my mind, will, in fact, raise the risk to the American people of another attack.” Again, Cheney went beyond arguing policy. He questioned Obama’s motives, accusing the president and his aides of not being sufficiently concerned about terrorists: “They are very much giving up that center of attention and focus that’s required.”

Now, how would Cheney know that? At that time, the CIA, in response to a request from the president, was actually coming up with a revved-up plan to find Bin Laden. The Obama administration also was intensifying its drone war against the Taliban, Al Qaeda, and other violent extremist groups in the Afghanistan-Pakistan region.

Later in the year, after the failed Christmas Day bombing attempt of a Northwest Airlines plane, Cheney again went on the offensive. In a statement, the former vice president derided Obama: “He seems to think if he gives terrorists the rights of Americans, lets them lawyer up and reads them their Miranda rights, we won’t be at war.” He charged that Obama “pretends we aren’t” at war and once more proclaimed that Obama had made America “less safe.” He was still pushing the spin that Obama did not consider national security a priority: “Why doesn’t he want to admit we’re at war? It doesn’t fit with the view of the world he brought with him to the Oval Office. It doesn’t fit with what seems to be the goal of his presidency: social transformation, the restructuring of American society.” This was no subtle dig. Cheney was contending that Obama was placing his policy agenda—health care reform?—above his duty to protect the United States. It was a polite way of calling him a traitor.

This past January, during an interview with NBC News, Cheney was asked if he still considered Obama a cause of concern: “You said you believe President Obama has made America less safe. That he’s actually raised the risk of attack. Do you still feel that way?”

Cheney replied that he was pleased that Obama had intensified the drone attacks on terrorist targets, adding, “That’s a plus that he’s learned in that regard. But I still worry.” That is, Obama still couldn’t be fully trusted with national security. Cheney noted that he and President George W. Bush had possessed an “absolute commitment” to preventing another 9/11. As for Obama, Cheney wasn’t sure: “I hope President Obama is to that point now where he has that same basic attitude. But we might never find out until there’s actually another attack.” That wasn’t much of an endorsement.

In his statement responding to the Obama-ordered mission that killed Bin Laden, Cheney declared, “[T]he message our forces have sent is clear—if you attack the United States, we will find you and bring you to justice.” But during the Bush-Cheney years, that message was not always so clear. In March 2002, Bush indicated that he was not that fixated on Bin Laden. Asked at a press conference about efforts to find the terrorist leader, Bush said:

We haven’t heard from him in a long time. The idea of focusing on one person…He’s a person who’s now been marginalized…I don’t know where he is. I just don’t spend that much time on it…I’m more worried about making sure our soldiers [in Afghanistan] are well-supplied, that the strategy is clear…I truly am not that concerned about him.

Four years later, conservative journalist Fred Barnes, after interviewing Bush, said that Bush had told him that capturing Bin Laden was not a “top priority.” Still, throughout the Bush-Cheney years, intelligence professionals maintained the hunt for Bin Laden. It was Obama, once he took office, who instructed the CIA (which probably didn’t need much more motivation) to push ahead. He signaled that nailing Bin Laden was a top priority. And he signed the order authorizing the risky mission that required unilateral military action and that did not include reading Bin Laden his rights. Obama was the commander-in-chief who delivered the message to Bin Laden and other terrorists: the United States will hunt you down and kill you.

This hardly fits the caricature of Obama that Cheney and other Republicans have been promoting since the president took office.

It’s unlikely that Cheney will retract his previous remarks. But he and other conservatives who denigrated Obama’s devotion to national security have lost a much-valued possession: the Obama-is-weak-on-defense card. They’ve been playing it since the 2008 campaign and, no doubt, they anticipated deploying it during the 2012 contest. GOP 2012 contenders for months have been slamming Obama on national security issues. But soft on terrorism? If Cheney or anyone else ever again hurls that charge, they will be met with an obvious reply: Obama weak on defense? Just ask Osama bin Laden. Oh, you can’t. He’s at the bottom of the ocean. Ultimately, this shield against an age-old canard often tossed at Democrats is worth much more than any apology from a grumpy old ex-vice president.